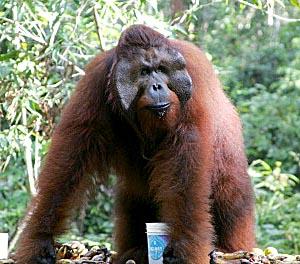 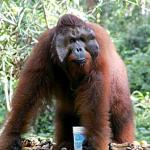 Asia's vanishing forests are home to many endangered species who may not survive the century. In the jungle of Borneo, Birute Mary Galdikas has spent the past three decades braving tropical diseases and violent encounters to study and defend some of the world's last remaining orangutans.

Her research has unlocked many secrets of the primates considered one of man's closest cousins and provided the backdrop to a remarkable life spent on the frontiers of science and civilisation. Jakarta correspondent Barry Neild travels deep into the Indonesian jungle for an encounter with the adventurous academic and the apes with whom she has formed a lifelong bond.

TANJUNG PUTING RESERVE, Indonesia, August 17, 2005 - Birute Mary Galdikas is enjoying a well-earned coffee on the wooden porch of her home when a huge and hairy hand reaches stealthily from below and grabs her cup. The drink is lifted to a pair of prodigiously puckered lips and slurped with noisy gusto.

"This is Siswi, the daughter of one of my best friends, Siswoyo," Galdikas says, casually introducing the thirsty interloper who then proceeds to guzzle her way through a small mountain of tropical fruit.

Despite Galdikas' familiarity with the ginger-haired orangutan who clambers onto the porch to offer her a rough and affectionate hug, Siswi's presence is an increasing rarity in the trees around her Borneo home, where aggressive destruction of one of the world's last remaining great ape habitats has led to a precipitous decline in their population.

Equally rare, perhaps, is Galdikas herself: a scientist whose boundless passion for the study and preservation of orangutans has repeatedly drawn her back to the hostile jungles of Indonesia and a life that is certainly unique among the few who share her profession.

Galdikas, born to Lithuanian parents and brought up in Canada, embarked on her lifelong quest to explore the world of great apes in 1971 after persuading eminent Kenyan palaeontologist Louis Leakey to recruit her as a researcher.

Leakey had already dispatched two other women on study missions to Africa -- Jane Goodall whose investigations of chimpanzees has made her a household name, and Dian Fossey, whose life and murder in the mountains of the Congo was turned into the Sigourney Weaver film "Gorillas in the Mist".

Galdikas, by then a University of California at Los Angeles graduate of psychology and zoology, was to become the third of "Leakey's Angels", exploring the mysterious "people of the forest", about which very little was then known.

"Initially I wanted to go to Sumatra, but Dr Leakey said there were already Dutch scientists working with orangutans there. He said he had something different in mind for me and sent me to Borneo," she recalls over another cup of coffee that she keeps safely out of Siswi's reach.

Alongside a small area of Indonesia's Sumatra island, Borneo is the only remaining natural habitat of the orangutan, whose numbers have dwindled to less than 60,000 from a population that once spanned Southeast Asia.

"If I had gone to Sumatra, my life would be very different. It was fate that I came here," says Galdikas.

There's something eerily human about them

"Here" is Camp Leakey, an orangutan research and preservation centre, named after her old mentor, that now employs 200 assistants to observe the apes and safeguard their environment in Indonesian Borneo's 400,000 hectare (988,000 acre) Tanjung Puting national park.

The camp, which now has a museum and a modest collection of wooden buildings (protected by orangutan-proof locks), is a far cry from the rudimentary hut that greeted 25-year-old Galdikas and her then husband, photographer Rod Brindamour, when they first set foot in Kalimantan's dense uncharted forests.

Then, as now, Camp Leakey could only be reached by boat -- a four hour chug up the crocodile-infested Sekonyer river under a canopy of trees filled with whooping gibbons and gravel-voiced hornbills.

Galdikas' first stint at Leakey saw her wading neck-deep in mosquito-ridden swamps and enduring monsoon rains to track the orangutans as they swung from treetops. Her studies of their mating, grooming, feeding and fighting uncovered many startling similarities with our own species -- discoveries which further fuelled her interest.

"I have always been fascinated by orangutans," she says, a fact she proves a moment later when she picks up a camera to shoot pictures of Pedro, a powerful 250 pound (113 kilogram) male orangutan who looms out of the twilight near Galdikas' house in the hope of finding food.

The Canadian's findings took her onto the front pages of National Geographic, and earned her an academic acclaim that she has followed up with several books, the latest of which, "Great Ape Odyssey", was published earlier this year.

Time is running out for the orangutans

But unwilling to abandon her new home and new friends, she returned again and again to Camp Leakey, furthering her studies and going on to establish the Orangutan Foundation, an organisation dedicated to saving the species from a looming extinction.

Massive deforestation in Borneo and Sumatra at the hands of illegal loggers, man-made forest fires, extensive gold mining and land clearing for oil palm plantations has seen a dramatic fall in the orangutan population in the past two decades, a decline Galdikas has struggled to keep in check.

"In the last 20 years, the population has probably dipped by at least 50 percent in Tanjung Puting," she says.

"But the net effect of having Camp Leakey and people here for 34 years is that this forest has been almost totally protected from fires, illegal gold mining and illegal logging. If we hadn't been here, it would have been destroyed."

Camp Leakey came close to destruction five years ago when 300 armed illegal loggers occupied the area and began felling trees. The involvement of local police in their eviction marked a turning point for Tanjung Puting, which now has several US-funded security posts ensuring the forest's protection.

However, environmental threats to the park and the rest of Borneo's jungles remain, primarily from palm oil farmers who view the orangutan as a pest, often capturing them and selling them on for about 30 dollars -- a pitiful sum compared to the thousands they trade for on the international black market, eventually winding up as exotic pets or exhibits in unethical zoos.

"Palm oil is the number one enemy of orangutans and all wildlife in Borneo," says Galdikas.

For all her efforts to protect the forest around her, the Borneo wilderness has repaid Galdikas, 58, with illness and isolation, taking its toll on her health and, at times, her family life.

Students visiting her at Camp Leakey are regaled with horror stories of atypical pneumonia and a particularly nasty bout of cholera that saw her lose 26 pounds in the space of a week. With her straggled, greying hair and weary demeanour, Galdikas is barely recognisable as the lithe young woman who once graced magazine covers.

"It's a very hard life here. People think it's glamourous -- they see me sitting with an adult female orangutan next to me or they see me with an adult male like Pedro, they see me on the cover of National Geographic and they see me in a TV film and they think its exciting," she says, referring to a documentary broadcast earlier this year in which she featured alongside Hollywood actress Julia Roberts.

"But it's actually very hard and very gritty, and you don't lead the most comfortable life in the world and your family complains.

"Your family makes sacrifices. My children, especially my two younger children, are very outspoken about that. I think it's worth it, but if you ask them they might have a different answer. However, I think they'd say it's worth it."

Galdikas, now a grandmother and a mother of three children all in their 20s, divorced Brindamour after the couple had completed seven years in Borneo. He wanted to resettle back in North America and she was smitten with her jungle life. She later married a prominent local Indonesian and, although she divides her time between Tanjung Puting, Canada and California, she holds an Indonesian passport.

Isolation is no longer a problem. During her visits to Leakey, she is inundated with visitors from PhD research students to visitors paying thousands of dollars to join Galdikas at feeding sessions for orangutans that have been reclaimed from captivity and reintroduced into the jungles around the camp.

But despite the increasing demands on her time, her goal remains the preservation of the apes, 240 of which -- some whose association with Camp Leakey dates back to the 1970s -- are currently under the care of the Orangutan Foundation.

"We are going to prevent extinction from happening in Tanjung Puting and so far we've done a very good job."