Seeking the Soul of Taiwan at Ten Thousand Dragons Temple. 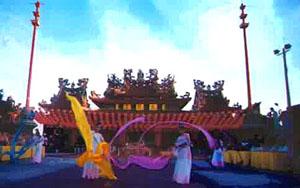 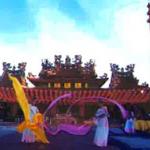 At first glance, Tainan county's Ten Thousand Dragons temple seems to belong to another time. The fixtures of days gone by are present in this Taoist temple. Old men play ancient games of chance in a room to the side, drinking tea and smoking cigarettes. The air is filled with incense as people come through and offer thanks to the gods. However, appearances can be deceiving. Ten Thousand dragons temple is no fading jewel set against the backdrop of modern Taiwan. It is the center of a vibrant community, the focal point for local concerns from unemployment and environmentalism to the planning of cultural events and weddings. More importantly, the temple is the first of what Soong Wei-Ru, the temple's main caretaker and village elder of the town of Ren T'eh Shiang hopes will become an island wide movement: The revitalization of Taiwan's spiritual and social life through the strengthening of local temples.

The day that I arrived was a busy one for the small community on the edge of Tainan city. In addition to the preparations taking place for the upcoming lunar new years celebration, there was also a horticulture competition going on, and the entranceway of the temple was filled with rare and delicate flowers from all over the world, each labeled with the names of the plant in Chinese, English & Latin, as well as the name and the town of the gardener. The foliage was lined 100 ping deep, and a quick glance of the entrants showed me that this was not merely a small town affair.

And indeed, Ten Thousand Dragons is not just another temple. Built in, the late Ch'ing dynasty the temple might be considered a mere relic of old Taiwan. But over the years, through the vision of people like Mr. Soong, the blessings of Tainan County Mayor Chen Tong Shan, and the hard work of the people of the town, the temple has grown to three times its original size. More important than the increase in size is the temple's expanded roles in the affairs of the community. While the Ten Thousand Dragon temple retains its original duties as a spiritual center, it's concerns far outstrip the original intents of its nineteenth century designers. It is, as Mr. Soong pointed out, an example of the power that lies latent in every community, the power to enhance and strengthen itself and the nation through local grassroot action.

The surrounding community seemed to support his outlook, being vibrant and alive, without the feeling of neglect sometimes seen in older villages in Taiwan. Mr. Soong stressed that the impetuous to strengthen the local temple came from all corners of the political spectrum, transcending the usual game of party politics. He showed me some pictures of the politicians visiting the temple, members of political parties that are often in vicious opposition on most issues. "While they are of differing political opinions in other regards, in this issue they agree"

It's easy to become awestruck in a Taiwanese temples, and the 10,000 dragons temple is no exception. A Taoist temple, it has several majestic statues and intricate carvings. But what most impressed me were not these precious works of art. Instead, my eyes were drawn to the walls, where hung some diagrams and pictures charting the deterioration of the local Er Ren river. Mr. Soong explained to me that the people of Ren T'eh Shiang were attempting to make the cleaning of this once beautiful river a priority for both the local and national government.

"Our town sits downstream, so we really cannot do anything with local measures alone." He told me "Most of the older people in town remember when the river was clean enough to swim or fish in, and feel badly that our children cannot do the same."

In addition to activities designed to raise environmental awareness, The temple also hosts a variety of activities for the people of the town. Some of these activities, such as the yearly Lunar new years festival, attract people from all over the island with their extremely varied entertainment. Throughout the year, the temple serves as a place where young people can hang out and take place in various activities, from basketball to art.

"Young people are the future of any community, and a community cannot survive if the next generation wants to, or needs to, move away as soon as they come of age."

Mr. Soong is especially proud of the way in which the temple has served the cause of keeping the community alive, especially with regards to its younger generation. He credits the town's success to the energy and determination of its people. "We didn't want our village to become a ghost town, with all of the young people forced to move to the cities to find work. So we got local people together, and wound up getting some new industries started. Now there are jobs to keep people here."

The Ten Thousand Dragon's temple is also a focal point for traditional Taiwanese cultural events, playing host to traditional dance troupes and musicians from all over Taiwan. A few months back, the temple and the town itself were venue to a bona fide traditional Chinese wedding, the likes of which is not often seen in today's modern Taiwan. "It was completely authentic, down to the last detail" Said Mr. Soong of the affair. "The groom was carried in on horseback, and both the bride and the matchmaker arrived in the traditional "Hwa Jyow" (an intricately carved wooden carriage slung between two poles, carried by the bride's family) For that day, the town was transported centuries back, as a procession wound its way through the streets in full traditional garb, ending up in the courtyard of the temple.

Mr. Soong believes that events like these help to strengthen Taiwan on several levels.

"By learning our culture, we become stronger as a people. By making our temple an integral part of the community, our community becomes stronger, and by having a stronger sense of community, our young people feel more secure in themselves, and less prone to the troubles that plague teenagers in the cities. The local temple is an integral part of Taiwan life, not just a place for matters of the spirit" He stresses "Ours is just one small town, but we hope that temples throughout Taiwan can revitalize and take an active part in the solving of problems that have developed in our rush to develop economically The temple is not just about religion, but about life itself."