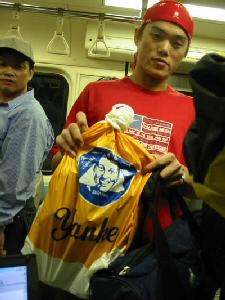 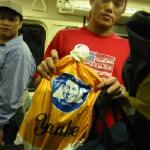 The Shenzhen Metro is a slow and shiny beast, crawling tentatively along its tracks as if still unused to the concept of light rail. This matches the attitude of the Shenzhenese towards the new subway. A year after the line's trouble filled grand opening and even the most worldly of Shenzhenese still ride with great awe, like 19th century European immigrants who've suddenly found themselves in the good section of some classy ocean liner. Stops come and pass slowly, and if you're watching the clock you soon realize that except in the worst traffic - which is downright alacritous compared to even a good day in Beijing or Shanghai - you'd have done better in a taxi. But you've bought your ticket, and now you've got to take the ride, and here's why: The casual commuter's freedom to waver was not high on the list of priorities for the doyens of Shenzhen City's subway planning board.

Getting on the train requires the purchase of a small round chit, and imbedded within that chit's plastic is a code telling the exiting turnstile from whence the traveler has come, and to where the traveler intended to go at the time of purchase. These stations are fixed, and upon purchase from one of the dozen chit-vending machines (only half of which actually work, and this is on a good day) the traveler is making a sacred vow with the Shenzhen Municipal Light Rail Authority: I will travel between these two stations faithfully and with great dogma, and waver neither inch nor station from the stop which I have chosen.

So you ride in the belly of the great iron worm as it leisurely makes its way through the city's shiny new intestines, parked on a seat if you're lucky or quick, but standing and glad just for the ride in any event. Should you follow your original plan and emerge from the station you'd originally selected, all will be well; you'll slide your chit into one of many slots at the exit station, and be rewarded with a pleasant chuff sound as the plastic waist-high gates slide apart, allowing for your egress. Deviation from your original route, however, is discouraged.

Following an afternoon spent in the neighborhood known as Overseas Chinese Town, basking in the edifying shadows of Window on the World's faux-Eiffel tower, Faux Pyramids of Egypt, and a geographically incorrect faux Manhattan island (where the statue of liberty is located somewhere in the Bronx and a faux-world trade center still looks out over a faux battery park), I decided to high-tail it back to Hong Kong via the Lo Wu crossing. Getting on the train at the Wow station (the last on the line), I bought my chit and settled in for a long ride back to Lo Wu (the first, same line).

Something about the ride lulled me into a peculiar feeling of Bonhomie for all things Shenzhen, and what I now see to be an ill-thought out fit of whimsy I decided I'd get off early; one stop early, to be exact, at the Gou Moue station. I figured I'd stop there to do some shopping in one of those shiny new malls where stores selling movies and CDs play mandopop at ear-splitting decibels, and the streets are lined with shoe-shine hucksters who slop oily cream on the passing shoes of unsuspecting foreigners then try to charge a dollar to wipe it off.

Climbing up to just below sub-ground level I stuck my chit in the slot, but the result was not a pleasant chuff, but a dull chink of plastic dropping onto metal. Needless to say, there was no subsequent near silent sliding of gates. I picked the chit from the turnstile maw and tried again, hoping it was some one-time error and hoping to avoid joining the long queue at the station's one open service booth. The result was the same, chink, no chuff, and no open gates.

Five girls just barely out of adolescence were hovering around the service booth, all wearing smocks bearing the Shenzhen Metro logo. I explained my situation as best I could, but something about the air pressure had thickened my tongue. I have never functioned well underground. They refused to open the service gate for me, and instead told me I had to wait for the harried one-man service agent, who was at that moment making change, offering travel advice to a group of women wearing conical straw hats and carrying cardboard suitcases, and listening complaints, of which there were many and would be more to come. When I reached the gate, I again attempted to explain myself "I got off a stop early - you probably owe me a few fen" The agent told me to wait while he slid my chit into a machine, nodding gravely, like a pharmacist faced with a customer trying to buy painkillers on a clearly forged prescription. Five minutes passed. The line behind me grew, and I grew increasingly frustrated, and was considering just skipping over the waist-high gate until I saw two uniformed metro guards were staring at me, probably waiting for me to make just such an ill-advised move.

Finally the agent got back to me. "This ticket is for Lo Wu. You're at the wrong stop." I explained to him again that I was aware of this, that I'd gotten off early, and would gladly forfeit whatever monies were owed me if he'd just open the gate.

"No, this ticket is only good at Lo Wu. You have to get back on the train and get off at the next stop."

"Only if you buy a new ticket. It will cost you five Yuan."

"But it's only one stop away." I argued, feeling my strength draining by the second.

"Yeah, but you got on at Hua Chao Cheng?that's on the other end of the city."

"You have to take the train back to Hua Chao Cheng."

Defeated, I pushed a moldy five Yuan note through the slot. It made no sense whatsoever. And when I paused momentarily on the avenue only to find a man dabbing foam onto my canvas high-tops, I shrugged that off as well. In China, expecting logic can drive you crazy. The only sane thing to do is to keep smiling and roll with everything.