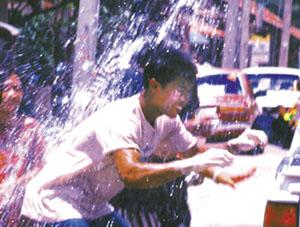 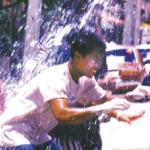 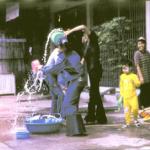 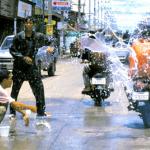 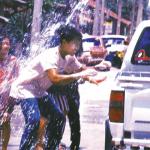 Friday April 13th 2001 has special significance as it is both Good Friday and Songkran Day. The latter is the traditional Thai New Year Festival , which until 1940 used to be the Siamese New Year. The festival is the most important in the Thai Calendar and is traditionally held when the sun moves out of Pisces.

As the nation prepares to party through its third new year in 4 months, Chiang Mai is as ever, dubbed as the center of activity and it is there that the celebrations are most vigorous.

If you're intending to be there at the hub of things, you should be already booked. If not, be quick. The main events take place over three days starting on the 13th.

Firecrackers are let off at dawn on the 13th as people start to spring clean their homes. In the afternoon Buddha images from local temples are paraded through the streets as people toss lustral water (water scented with perfume and flowers) to bathe the images.

Ceremonies are not held on the second day which separates the new year from the old.

The new year begins on the third day but water throwing takes place continuously throughout the festival. Daily drenching begins as early as nine in the morning and goes on till sundown. It continues for at least four days and sometimes longer in the countryside. Drive slowly and beware of water hitting you at high velocity, especially if you're on a motorcycle.

The entire nation arms itself with buckets, squirt guns and anything that can project water - and drench all but monks, the aged and mothers carrying very young children. Wear clothes that you can be wet and happy in. Foreigners are always a welcome target so protect cameras, wallets, etc. in plastic bags.

Of course, the activity is not limited to Chiangmai as the whole country goes water crazy in the hottest month of the year. Perfect.

Bangkok tends to suffer a longer bout of drenching as does Pattaya which virtually sees 2 weeks of revelry with the follow up Pattaya festival immediately after the new year.

For those in less of a party mood, more traditonal style parades etc.. can be seen in Hua Hin, Prachuap Khiri Khan or the northern villages.

However, the watchword is to book early or be disappointed. Hotels book up far in advance and even guest houses are usually at capacity before Songkran day. Rail and bus tickets are impossible to find at festival time as relatives head up country to visit their families. The whole country is in transit for a week.

For 2001, the beach destinations have been fully booked for some time and it is the northern towns, other than Chiangmai and Kanchanaburi province that always show the last of the accommodation availability.

In this respect, that's good value for money as most upcountry destinations do not increase their prices anywhere near the escalated rates of the beach resorts. An unwelcome recent addition is the noticeable "compulsory" Songkran dinner which has started to appear on some hotel reservations

Neighbouring Cambodia, Laos, Myanmar and even Nepal have similar festivals at this time so its perhaps the busiest annual period for the region, not just for the land of smiles. Venturing out of the country either for the holidays or to avoid a drenching can therefore be similarly frustrating when booking accommo-dations and flights. It also makes Malaysia and Indonesia very popular destinations, even allowing for Easter visitors.

For many expatriates it is an ideal opportunity to make headway on the sightseeing within the region that requires those extra few days. Such holidays involve Teman Negara and Mount Kinabalu along with Sandakan Orangutan sanctuary in Malaysia. In China, Yangtze cruises prove more than popular, especially with a Great Wall and Terracotta Warrior excursion thrown in. A visit to Japan prior to the May blossom festival will always be a cheaper(!) treat than a month later. For the Phillipines, Cebu and Boracay seem closer and worthwhile when the extra days are taken into consideration. Sri Lanka, although celebrating the Easter festival is one of those destinations also requiring that little extra time to see enough of it - and Songkran is a perfect time for that.

All in all it's a big break as well as a third new year for all those resident in the kingdom. As ever, the fact of actually being here offers a tremendous choice of how to spend that holiday time.

Personally, I am staying put to take advantage of an empty capitol and to see all of those things I have been unable to reach during those heavy traffic days - Wat Indrawiharn, Kamthieng House, Vimanmek, Suan Pakkard, Muang Boran - as well as also enjoying some non-noise pollution days.

Seriously, Bangkok is a treat at any holiday time, but especially at Songkran when it is the least busy and everything is so attractively accesible. Of course, I will get wet, but not behind the ears. Sawasdee Pimai.