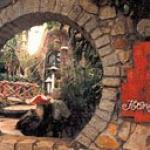 So the bed cover is blood red. Or shocking pink, adorned with bright yellow and aqua phoenixes. A touch of green in their feathers. The drapes? Brown, with massive yellow daisies. The leaves, blue. Ah...well...it's all part of the decor.

You're at the Hang Nga Tree House. Without a doubt, the most original hotel in all of Vietnam. Or the universe. Some say it's tacky and you can't quite disagree. But the cheesy tackiness of it all is also its absolute charm.

Your room is actually in a tree. No, not a real tree. A cement one, and solid. You may feel like a gnome inside a giant mushroom, but it's a better alternative than square holes with square windows and square furniture.

The Hang Nga Tree House hotel, or as it is called in Vietnamese, The Spider Web Chalet, will give you the impression that some wacky architect built this place whilst on a bad acid trip. In fact, it was designed by Dang Viet Nga, best known as the daughter of Truong Chinh, former president of the Socialist Republic of Vietnam. She studied architecture and lived for fourteen years in Moscow.

She came to Dalat to design and build the Youth Culture House, and ended up settling there. She acquired an old French villa and started to build a fantasy garden around it, with sculptures of dwarves and mystical figures. Later she decided to turn it into a hotel, but preferring to build a new structure and using the villa as her own residence and administrative offices.

A classic Vietnamese half-circle stone gate leads to an Eastern garden and a pond. There is a spider web over the pond, made out of tubes and wires. The one spider is of carved wood, or maybe it's a coconut shell. The swans could be of carved wood, or maybe painted cement. A giraffe sculpture in the garden is actually the tea room. Nearby, sad-looking figurines represent Ms. Nga's sorrow when her designs were first rejected by local authorities. Giant vines curl around a tree trunk that grows into a nude maiden. It all sounds strange, but somehow, you will be captured by this fantasyland.

"It's a must," says Nguyen Phuong-Anh, owner of Saigon's Q Bar, who stays at the Hang Nga Tree House "every single time I am in Dalat." The blood-red covers do not bother her. The furniture's comfortable and there are always fresh flowers on the nightstand. The ceilings in many rooms will make you feel like you're in a cave, but the soft-white color, and the imitation rock formations (with light bulbs inside) will take away any claustrophobic feelings. And if you don't like to look at the ceiling, there's always the massive mirror over the bed. (Yikes. It's tilted at an angle to reflect the blood-red cover. Buy yourself a hand-woven cover sold by giggling Cham women near the central square...They are exquisite and will help.) In one room, a tiger is making its way down a column. Not a real tiger. Not paper. Painted cement.

Ms. Nga must have failed geometry in architecture school. No single pointed corner or conventional line anywhere. What looks like a polished-wood spiral staircase is actually a sculpted shelving unit. And the natural pine wood grand piano on the floor, that will be the bed. No two rooms are alike. This hotel is utterly enchanting.

Breakfast is available if ordered in advance, and if you want a drink, the bar's atop the tree, which offers a panoramic view. Sometimes Ms. Nga will cook dinner for the guests herself. Visit her villa. She has retained its old charm, with the whitewashed walls and art nouveau armchairs. Then there are always all those photos to gawk at: Ms. Nga and Ho Chi Minh. Ms. Nga with her father. Her father with Fidel Castro.

Dalat is the destination for Vietnamese honeymooners, and at the Hang Nga you're likely to run into actors and models and the hip and elite of Vietnamese society. It's at 3 Huynh Thuc Khang, near the palace of Emperor Bao Dai, and up the hill are a few Buddhist temples. It's also a convenient three-minute ride to downtown Dalat. The hotel can arrange for videotape and catering services, as well as other standard requests such as tour guides and transportation. If you have a car and driver, she will offer the driver one of the spare rooms of the villa for free. All of this makes hers a popular place, so book in advance when possible. The telephone number is 0163-22070. Rooms are between ten and fifty-five dollars.

By the way, that giant bamboo-looking thing in the middle of your room is made out of cement. Or maybe it's brick. No, clay. It's a closet. Or maybe a fireplace. Either way, a good place to store a bed cover. Blood red.