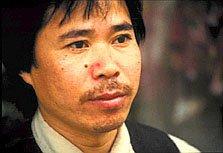 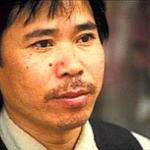 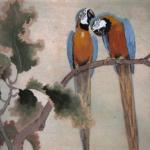 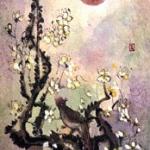 At forty, Le Thanh Minh is already an accomplished painter. After three years of training at the School of Fine Arts in Hanoi, he spent a further five years in Moscow, studying and graduating from its prestigious arts institute. He has had one-man and group exhibitions in Paris (1983), Berlin (1984), St. Petersburg (back in 1987 when it was still called Leningrad), and Moscow (1993).

Le Thanh Minh has also sold his work to collectors from dozens of countries from Poland to Peru, from France and Sweden to Austria, Germany and Turkey. Of course, visitors to Hanoi from nearer countries have also bought many of his paintings. Several Hanoi gallery owners say his paintings are popular with visitors from Korea, Japan, Singapore and Hong Kong.

Le Thanh Minh claims to have been interested in painting as a child. "As an adult," he says, "I am hoping to develop my own voice further."

There is no doubt that he remains among the most unique of painters from Hanoi. He exhibits none of the self-absorption that often colors the paintings of other artists. His oil paintings are classic scenes reminiscent of what was taught under the French in the twenties and thirties at the Ecole des Beaux Arts de L'Indochine. Minh's canvases consist mainly of realistic portraits, groups of women in traditional clothes, and flowers that contain a fluidity dating back to the traditions of the masters of the time.

Le Than Minh's nude paintings earned him the name "Minh Con Gai," "Female Minh," before he took off for Moscow. His nudes are particular for they don't merely represent the classical female human form. Rather, the nudes are often caught in the act of showering or bathing, representing a desire to purify, even when one is already near the apex of beauty.

It isn't a coincidence that he has selected to give his paintings rather common names. There is nothing philosophical or pretentious in names such as The Yellow Squash, Morning Dew and Traditional Wine. Minh says he is concerned with maintaining the beauty of the female form, but at the same time, not glorifying it.

"It is more important to me that the beauty of the women I paint can blend in with the beauty of the surroundings," Minh says, pointing at the subtle colors and details he used for leaves, forests or the reflection of the moon on a river.

It is his paintings on Vietnamese bark paper, giay do, that set him apart. They are pastels of light green and gray, the color of moss conveying an old-world sentiment. They are dotted with delicate flowers, hands and exquisite nudes. Such elements are common in the work of many Vietnamese painters, but Le Thanh Minh paints them with images of the Buddha, and allows them to take part in a clever dialogue about the spiritual and the material world.

"I have been thinking about these themes for a long time," he says. "Three, four years. They may look simple, but there is a lot in them. Most people in Vietnam don't even know what it is I am trying to express."

That is an odd statement, for the expression in Le Thanh Minh's paintings are informed by an Eastern sense of aesthetics. There are large expanses of space in his tableaux, and details are exquisitely rendered in minute dimensions. The Buddhist notions are also very apparent. How does Buddhism deal with the good and evil? In one painting depicting a serene Buddha sitting in front of a spider web, Le Thanh Minh presents us with a choice: A fly is caught in the web. To remove the fly is to save its life. But that also means to destroy the living environment of the spider.Other paintings by Le Thanh Minh further portray Buddhist concerns: birth, childhood, sickness, suffering, aging, death. The paintings may be strange to Vietnamese collectors who normally prefer a purer sense of aesthetics leaving philosophical discourse to other fields than fine arts. But foreigners are drawn to Le Thanh Minh's classical lines and near-perfect renderings of the human forms. His attention to details is also greatly appreciated. His questions about one's proper conduct in life are raised with subtlety.

What is extraordinary about human life is expressed through the use of ordinary objects. And the spacial relationships of all objects take on an unexpected importance. As Minh says, "The images are also the background, the background is also a part of the painting. Everything must be balanced."

Following an exhibition in Moscow in 1993, the critic Nguyen Chi wrote of the artist: "Le Thanh Minh has studied with a serious and respectful attitude the philosophies, aesthetics and fine arts of Asia. He speaks openly, sometimes loudly, but as a writer he would be a poet. As a painter, he has found a bright horizon for himself. His paintings express a serious sense of harmony, his compositions are sure-footed, yet fluid and calming."

Le Thanh Minh knows that some Vietnamese art collectors do not appreciate his work. "For now, I am happy with the foreign collectors," he says. "They are able to discover details in my paintings that normally escape the eyes of casual art buyers."

Le Thanh Minh sees in the increasing number of visitors to Vietnam disadvantages as well as advantages. "Obviously, there is a multi-faceted arts scene in Vietnam now in response to the number of tourists and art collectors from abroad. They are raising the standards of living of the people and the artists. We are able to afford larger canvases, more paints, we don't have to work at other jobs to sustain ourselves."

On the other hand, many people are fooled into buying paintings by mediocre artists. "There is a lot of copying. Gold is mixed with brass, and people without training are turning out work in a mass production method. They are only painting what sells."

In the end, that situation will change, Le Thanh Minh claims. "People will be more selective. The open communications with the world will also bring in new ideas. It is still difficult for Vietnamese artists to go and learn abroad, but we are absorbing quite a lot in the last years. There is a perpetual need for exchanges of ideas."

Le Thanh Minh, who has traveled to several countries in Europe following his years in Moscow, now has a new dream: "It would be great to go to the United States. I paint about the spiritual world. Where else can I go but to a materialistic society?"