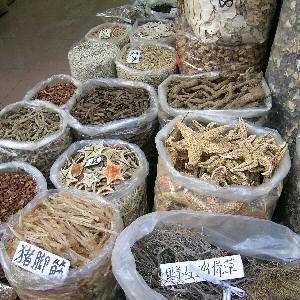 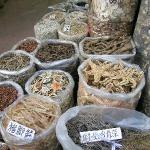 Not long ago Guangzhou's Qingping market was notorious as a place where unmentionable stenches mingled with the cries of chickens, rabbits, owls, rats, civet cats, and other animals in varied stages of slaughter. The sprawling maze of shops, stalls and wet markets that made up the bazaar was someplace from which weak-stomached or animal loving travelers were advised to steer clear. After the outbreak of SARS in 2003 (said by some to have pole-vaulted the interspecies viral chasm by way of civet cat, an animal whose ugliness would, in most cultures, afford it a natural protection from human consumption), the Guangzhou government decided a change was in order. A modern metropolis, after all, is no place for a market with so much illness (not to mention bad publicity) generating potential. So a plan was drawn up to expedite the Qingping market's transformation from a freewheeling anything goes Chinese market to one specializing in Traditional Chinese Medicine.

Three years later, and the transformation is nearly complete. What was once the heart of the old market has been torn down, replaced the new nine-story Traditional Chinese Medical Plaza. It's a clean mall with wide aisles and escalators, and a hundred or so stalls of varying sizes. And as if this writing, it's mostly empty, presumably waiting to be filled with merchants dealing in everything from Acupuncture needles to Zebra testicles.

"We're still selling spaces," Says Li Wei, a sales representative for Hopefluent, the real estate company developing the mall. "This is going to be a very good place not just for locals, but also for tourists, much more suitable than the old Qingping, which really made a lot of people uncomfortable."

Though the new mall may still be in its soft opening phase, in the surrounding alleyways and in the old three story plaza to the west, its business as usual for the purveyors of ingredients used in Traditional Chinese medicine. In the shade of the still vacant new mall, two young women sit displaying their wares in baskets. From a distance it looks as if they'e selling oddly shaped yang rou chuan, the lamb-k-bobs that are ubiquitous in Beijing. Closer inspection reveals a basket filled with dried lizards, splayed and sewn to a stick. At 15 Yuan per stick (with two lizards per), the price seems cheap. But what are they good for?

"They strengthen the immune system," one of the women tells me "o you won't get coughs and colds."

Preparation is simple, just soak in either water or wine.

"The taste is kind of bad, so most people soak them in bai jiu (Chinese white liquor)."

Over on Qingping street, one shop owner says she isn't worried about competition from the new mall. "It'll attract more customers, and they'll shop all around the neighborhood. It's certainly better than the old market."

Mrs. Yang says she's been running her small shop for over a decade, and notes my curiosity at one product, something resembling like long, flat potato chips and shaped like a cow's tongue.

"That's Tian Ma Pian" She tells me. "It's a tuber that grows in Guizhou. It's very popular with students cramming for exams, because it can help improve memory and concentration."

I buy a bundle, and Mrs. Yang instructs me in its preparation. "Take two slices and soak them for a few hours in water, then drink the water."

Mrs. Yang introduces some of her other merchandise, much of which comes from the sea. Dried Puffer fish is sold by the kilogram and can be made into a broth "It's very good for digestion," she says. Dried seahorses, plucked from the seas around Hainan Island, can be ground up and made into a good tonic to strengthen the kidneys. She smiles when I ask her if she has many western customers.

"Not really. I think most westerners don't believe in Chinese medicine."

Not every Qingping market merchant share Mrs. Yang's affability. A few shops have signs reading no photo in English, and shopkeepers clearly uninterested in being chatted up by a pen-and-notepad wielding westerner.

"Go away," one tells me "I'm trying to run a business." As far as I can tell the shop sells only ginseng and dried sea animals, with none of the more egregious ingredients (like bear gall bladder bile, an item in high demand not as aphrodisiac, as many believe, but as a panacea for liver ailments and general pain) on open display.

Other merchants, however, have few qualms about trying to impress an amusingly inquisitive foreigner in their midst. "Here, try this," says one young shopkeeper, handing me a tiny piece of what looks like the thin, white stalk of a mushroom. He watches closely as I chew the stalk. It has the consistency of a stale marshmallow, sans the flavor.

Further down the block on the corner in front of the stairway overpass that leads to Shamian island sits another group, all dressed in traditional Tibetan clothing. Their wares are of a decidedly politically incorrect nature; tiger bone, tiger claw pendants, and whole tiger paws, all spread on blankets while the merchants employ the hard sell approach.

"Real Tiger paw, from Tibet" one yells at me, thrusting a dried paw complete with fur and outstretched claws into my face. After scanning the area for anyone looking like a party member, I mention to the merchant that the Dali Lama had requested that all Tibetans stop dealing in endangered species.

"The Dali Lama said that" he responds, grinning broadly "So does the Chinese government. I'm surprised they agree about anything."

Though aggressive, the middle aged Tibetan-clothed merchant is friendly, and on hearing that I'm researching Traditional Chinese Medicine he tells me his name is Jiashi and expounds further on the efficacy of his product.

"You can shave off little bits of the nail and drink it with hot water. It's good for high blood pressure and cures sinus ailments. It can also strengthen your xiao didi (little brother, or penis)."

Of the paw's authenticity I can't vouch. Jiashi asks 300 Yuan for it, which seems awfully cheap for such a rare commodity. But I have serious doubts about the veracity of the man's claimed lineage. Beside his clearly Han-looking face, his Mandarin is perfect and his accent pure northern China. Looking around, I realize that of the dozen or so claw, bone and assorted jewelry merchants affecting Tibetan garb, only one or two have even remotely Tibetan facial features. But despite his being a charlatan engaged in what's either a genuinely rotten or merely crooked trade, Jiashi is an affable enough sort. At one point, a group of camera-toting foreigners start taking pictures of his goods, and he yells "no picture" in English, but without much enthusiasm. I sense that this is a common occurrence.

"I think they were French." I reply. Jiashi confides to me that westerners rarely buy his goods. "Mostly they just take pictures. I ought to charge them 10 Yuan per shot."

I wish him good luck and move on to the largest remaining part of the old Qingping complex, a three story structure on the West side of the new mall. This complex, too, has been cleared of livestock, and now deals only in Chinese medicines. The market is crowded on a Sunday afternoon, and the most prevalent item being sold in here is ginseng. I buy some, expecting it to be Chinese, only to find out that it comes from Wisconsin (the state is apparently diversifying its investments away from a strictly cheese-based portfolio).

There's are a plethora of animal items for sale in the older market, dried starfish, deer antler, scorpions, and whole snakes (both dried and floating in bottles of liquor). One item on display in many shops dried deer tail, black strips about finger length with the consistency of stone, are sold in abundance. "This comes from Malaysia," a young shopkeeper tells me. "It is soaked it in hot water to make tea, and is said to cure back ailments. One piece last a really long time."

So while the Qingping market may have undergone fairly severe renovations, nobody would say its been entirely gentrified. The civet cats may be gone, and the tiger claws driven onto the sidewalk. But it seems unlikely that post-renovation Qingping will rank highly on PETA's pleasure tour list. And as far as believers in the medicinal value of dried starfish, crushed scorpion and lizard on a stick should be concerned, it's probably a good thing.

This story originally ran in Business Traveler Asia in July, 2006