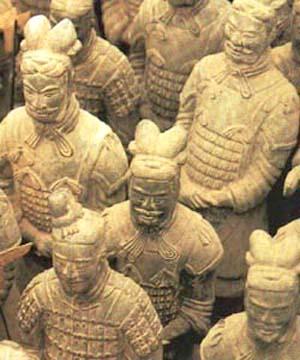 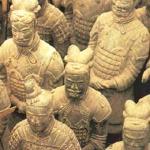 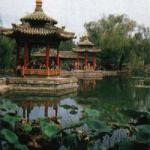 It was a typical day in March in 1974. As usual, Chinese villagers living along the Wei River are experiencing the annual drought despite living so close to the river. People around the entire village of Xiyang, some 1000 kilometers south of Beijing are getting desperate. Soon, every single drop of clean water in the village will be used up. A group of men decided to try digging a well near the foot of Mount Lishan, where the Wei River originates.

The men were digging the well for hours until one of them, Yang Xi Man, struck something. At first, thinking it was merely a hard stone that got into way; he tried getting the other villager's help to remove it. No one expected the "hard stone" to be a terracotta soldier, part of the almost 8000 terracotta figures buried underground in Xiyang for more than 2000 years. The villagers' search for water unveiled something much more important -- the discovery of the terracotta soldiers became one of the greatest archaeological find in this century. In Chinese archaeology, this find is important both for its vast scale and for the realistic detail and aesthetic achievement of the buried sculpture.

These magnificent armies of terracotta soldiers are intricately crafted with fine facial features. All of the soldiers are about 1.8 meters tall and wear helmets and armor. Many speculate that the figures are crafted according to actual soldiers, thus accounting for the different faces. The soldiers also carry battle weapons like swords, crossbows, javelins, bows and arrows. Real-size horses are also contained in the vault, with each chariot drawn by a team of four. These soldiers stand guard outside the tomb of Shih Huang Ti.

Shih Huang Ti, the first emperor of a unified China, was the man who literally united the Great Wall of China -- ordering his subjects to link different parts of the wall originally built by different provinces. After decades of fighting between warlords, attacks between the various clans and other instability around the provinces of China, Shih Huang Ti was powerful enough to realize his "one China" dream. It was he who created the standardized Chinese script, unifying the people with one common language. He introduced the concept of one currency for the entire nation, and indeed, some even say that "China" is named after this great emperor.

Yet, despite all these advances introduced, Shih Huang Ti is also a ruthless ruler. He ordered all books that do not subscribe to his concepts to be burnt. Scholars with different philosophies are also killed to prevent the people from being "corrupted" and start rebelling against his rule. He particularly opposed to Confucious teachings. Confucianism stresses the responsibility of the emperor to the people and teaches that if you tax people too heavily and do not administer by the principle of propriety, your reign will not last and there will be rebellion. Excess was to be avoided. However, Shih Huang Ti revelled in excesses.

According to the Chinese history, Shih Huang Ti ordered the construction of this extraordinary mausoleum when he was only a 13 year old boy emperor. Thirty-six years and 700000 construction workers later, the Terracotta Army of Xian is one of the world's most impressive displays.

During his lifetime, the Great Wall protected him against invaders. In death, his terracotta soldiers symbolically protected him against his enemies. Yet, despite the presence of his artificial soldiers, some people raided his tomb for numerous treasures after his death around 200BC. This caused the entire tomb area to cave in and lay undiscovered until the group of desperate villagers came in search of water.

The discovery of these soldiers propelled the Xian right to the top of the tourist map. Previously an unknown village in the backwaters of the south, in 1980s and 1990s, Xian became a buzzword for many foreign tourists. Travelers, intrigued with the authoritarian rule of Shih Huang Ti, were eager to see these soldiers themselves. However, due to strict controls to maintain the natural conditions on-site, most tourist visits are fleeting at best.

Today, Xian is one of the most attractive and historical of Chinese cities, being geographically the start or end of the Silk Road (depending on how you look at it). Xian is also united China's first capital and has been the capital for many periods after.

The short two days detour from a usual Beijing holiday is not enough to finish visiting all three terracotta soldier chambers, let alone the Muslim areas of Xian, markets, museums and temples spread all around the Wei River. There is also a Neolithic Village further south, described as one the most complete by many archaeologists. The mud-built walls and shelter is considered one of the most advanced of Neolithic settlements discovered.

The part of the Great Wall around Xian was built around 1370 and runs like a rectangle around the Xian Old Town. Parts of this wall are already in ruins, due to years of neglect. The only continuous stretch runs for about 5 kilometers -- good enough for a good walk or even a bicycle ride. Many locals also use the lane along these ruins as a bypass to the new part of Xian city. The wall is almost 20 meters thick and 12 meters high, lighting up at night. In the morning, many locals practice Tai Chi (a form of traditional exercise) near the beginning part of the wall.

This ancient wall is a great navigation point for tourists -- especially those unfamiliar with the local dialects and languages. The Eastern Gate is an area where many families gather during weekends. If you could spare a time, take a short walk at the little park near the Eastern Gate. Here, there is an old Bell Tower built in 1582. The Bell Tower was believed to be a method used to warn the citizens when there are major disasters in the area.

Today, a huge billboard stating the number of road accidents is placed in the park. Despite the high number of road accidents and fatalities, driving in China is not for the faint-hearted. Many drivers seem to revel in driving directly at incoming traffic, and even at pedestrians. Many tourists will find crossing the major roads a rather daredevil of an experience!

A usual trip to Xian will entail a terracotta tour in the morning. On the way to the archaeological site, travelers will be dropped off at the Banpo Museum. Long before Shih Huang Ti's soldiers were discovered, archaeologists found a Neolithic Village here. Visitors can witness a proper agricultural Neolithic settlement here, complete with proper walkways between houses and farms. Banpo had about sixty buildings and, based on archaeological studies, housed over 200 people from two different clans.

The ruins are divided into a residential area, a pottery manufacturing area and a cemetery. Five excavations that were conducted from 1953 to 1957 revealed the remains of 45 houses, 200 storage pits, 6 pottery kilns, 250 tombs, and more than 10,000 stone tools and everyday articles. These articles are most significant because they provide solid evidence of the existence of settled communities in prehistoric China.

One distinguish feature about the village is the fact that all graves in the area contain remains of females, leading to speculation that this Neolithic village might be ruled by females.

After this short tour, it is time to visit the famed terracotta soldiers. The sight of these soldiers is truly a one-of-a-kind experience: in the cold, damp building, thousand of lifelike, life size figures stare at you, eerie and sinister. Each soldier has different facial features and there are rows and rows of them. Those in front have clear facial features, having been restored by professionals.

The ones behind have been left as it was found in March 1974 -- some as jumbles of arms and legs. Although there are actually three chambers housing the terracotta soldiers, the original hut shelter which covers the pit found by Yang Xi Man is still the most important. There are two other excavation sites, but they don't contain anything like this spectacular display. Officially, no photographs are allowed. However, most of us managed to sneak a photo or two when the guards are looking away. Apparently, this is due to the problem the government had with camera flash, but if you're using high ISO speed and no flash, then it is okay.

At the moment, Shih Huang Ti's tomb itself remains closed. According to historical sources the tomb is very special and very rich. It is liken to one of the Egyptian Tombs in an Indiana Jones movie. It is said that the emperor's coffin is standing on a platform of copper and that it beneath it is a river of mercury. Chinese legend claims that everyone working with the tomb was killed after completing the work to prevent them to tell anyone about the secrets that lie within. Apparently, many traps are built to prevent unauthorized entry into the tomb. Whether this is merely folklore or the truth, we will not know until the tomb is finally excavated.

After a short while in the cool chamber housing the Terracotta soldiers, it is time to bid the soldiers farewell. Outside the chambers, many miniature replicas of the terracotta soldiers are sold. Somehow, after seeing the brilliant works of art, carting one (or several) of those replicas home becomes an irresistible lure. Despite the weight, almost every visitor decides to purchase at least a soldier as a memento.