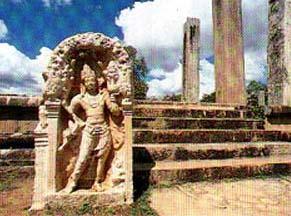 Some of the old carved statues in Anuradhapura. 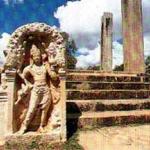 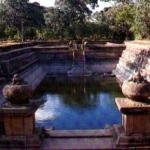 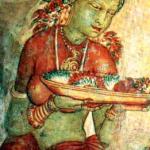 According to recorded history, in the fifth century before Christ, Sri Lanka was already a land of well-ordered civilization. A North India group of people, believed to be Aryans, settled in the north-east of the island. Here, they raised farms with an irrigation system that rivaled those belonging to later human civilizations all over Europe. The Aryans also founded a system of government that lasted for well over two thousand years. In its heydays, palaces, parks, temples and monasteries are built, laying foundation for the culture and philosophy of the modern Sri Lanka.

Later, in the third century BC, the ancient capital of Anuradhapura under the Sinhala Kings was known as a main trading port. This town was even mentioned in the records of the Roman and Chinese empire. In 247 BC, the people of Sri Lanka, due to the influence of Emperor Asoka's son, Mahinda, converted to Buddhism. Despite the Dravidian invasion later on, which introduced much Hindu culture to the country, Sri Lanka remained firmly a Buddhist country till today.

For the modern day travelers, vestiges of the ancient civilization are still abundantly extant all over the island, and are easily accessible by road from Sri Lanka's capital city of Colombo. After many years of civil war between the central government and the Tamil Tiger rebels for the past 19 years, leaving more than 65000 people dead and displaced more than 1.6 million people, things are getting more settled. Currently, both parties are negotiating for rehabilitating many areas in Sri Lanka ravaged by the war between the majority-Sinhalese and the minority Tamils, who are mainly migrants from South India.

Facilities near most of the ancient ruins are quite tourist friendly. Travelers can choose to stay at colonial-styled bungalows or in resort-styled hotels around the ruins. After a good night's rest, travelers can take a drive through the flourishing paddy fields and through jungle reserves (where elephants and leopards still roam freely!) to get to the ancient cities.

Located about two and a half hours drive from Colombo is Anuradhapura, the main trading post of ancient Sri Lanka. According to a Sinhala Buddhist chronicle, the ancient town is well planned: different precincts are set-up for huntsmen, religious people and foreign traders. Hospitals, hostels and even reservoirs are constructed to ensure continuous water supply. The caste system is evident in this society, separate cemeteries are built for people of different castes -- evident by the jewels the dead are buried with.

Among the Buddhist monuments found here are four great stupors, solid domes of earth and brick built over a Buddhist relic, with height reaching over 80 meters. Another must-see is the Sri Maha Bodhi, a Bo tree grown from a sapling of the original tree which Buddha gained enlightenment in India. This small tree with slender limbs is the oldest authenticated tree in the world today. The tree is so important that it has been guarded 24 hours a day for the past 2000 years by its hereditary attendants!

Despite the lack of large scale conservation efforts, the ruins of Anuradhapura are surprisingly well-preserved. Abandoned since a major invasion in 993 AD and hidden away in the thick foliage of jungle for a long time after, the splendid UNESCO Heritage Site, complete with is palaces and monuments are once again accessible to travelers. Since the ruins are spread out, travelers are advised to either hire a car or a bicycle. Mihintale, a rock located on top of a mountain regarded by many as the cradle of Buddhism, is located seven miles east of Anuradhapura. Buddhist shrines are built all around Mihintale. In the center, a grand stairway with 1840 steps leads to the peak of the rock. Many tourists climb up here to get a panoramic view of Anuradhapura and the surrounding areas.

Deciding which of the UNESCO site, Anuradhapura of Polonnaruwa, is more impressive is rather difficult. While Anuradhapura is much older and larger, Polonnaruwa built in the 13th and 15th century is better preserved. When the Chola Kings from South India invaded Sri Lanka, they moved the capital to Polonnaruwa, which is easier to defend from the traditional Sinhalese kings, whose base was in Ruhuna. However, the Sinhala ruler, King Vijayabahu 1 managed to evict the Cholas, but continue to use Polonnaruwa as the capital.

This medieval capital of Sri Lanka is located two hours south east from Anuradhapura. Its ruins are surrounded by a huge irrigation complex called the Sea of Parakrama, built during by the golden reign of King Parak Ramabahu I. Within the city walls, various shrines and temples are built. Of the once impressive Royal Palace, only the massive 3 meter thick walls survive.

Further northwest is a complex known simply as the Quadrangle, which many claim to contain the richest collection of ancient ruins in Sri Lanka. Thuparama, an ancient Theravada-styled temple, is still standing. The 9 meter Gal Pota (Stone Book), used to record Buddhist texts and genealogies, can also be seen.

North to the ancient palace, near the road leading to Dambulla, there are other historical relics. Some relics excavated from here, including the stone lion that once guarded the palace of King Nissanka Malla and other Hindu statues are now kept in museum nearby.

Since the Polonnaruwa ruins are less spread out, cycling is completely unnecessary. Taking a slow walk around the various buildings is the best way to explore the area. Revel in the lush green countryside the tumbled ruins of monuments, reservoirs and palaces that bring back the culture of a long-departed people, unforgettably hewn from living rock.

At the height of its glory, Sigiriya was a royal citadel for more than 18 years. Known as a city of legends, there are many stories about the love and betrayal the royal family endured in Sigiriya. Many plays and films in Sri Lanka today feature the founder of Sigiriya, King Kasyapa (477 to 495 AD), a son of King Dathusena by a palace consort.

According to historical scriptures, soon after Kasyapa cunningly took over the throne upon his father's death (the true regent is Moggallan), he left Anuradhapura. As he knew he was the cause of King Datusena's death, he decided to build a palace modeled after the mythical abode of Kuvera, the God of Wealth, and dedicate it to his father. Over the next ten years, he built many grand buildings in Sigiriya. As the place became more prosperous, Kasyapa was challenged by his half-brother, Moggallan, Datusena's son whose mother is queen. As he rode out to battle against Moggallan's tropes on his elephant, the animal got stuck in mud. Kasyapa's soldiers, thinking he was retreating, abandoned him. Because of this, King Kasyapa slew himself with a dagger. (Read a translated Sri Lanka text on the life and death of Kasyapa here: http://www.lankalibrary.com/heritage/sigiriya.html)

After Kasyapa's rule, the capital of Sri Lanka was shifted back to Anuradhapura. Sigiriya became a monastery, but soon became less important. The previously grand monuments fell into disrepair.

Till today, Kasyapa's heritage remains in Sigiriya. In a sheltered area on the western side of the Sigiriya rock, there are many famous frescoes. On the north side, there is a nine-foot wall that was so highly polished that till today, after fifteen centuries of damage by sun and rain, the wall can still reflect one's image. Thus, it is known as the "Mirror Wall".

On the north end of Sigiriya, there is a rock (the Lion Rock), from which Sigiriya was named after. A long time ago, a gigantic stone lion sat here, and to enter Sigiriya, one had to walk between the lion's paws and into its mouth. However, the lion's face has faded away over the years, leaving only the paws and some steps behind.

A short drive away from Sigiriya will bring you to Dambulla, where the famous rock temple dating to first century BC. According to Sri Lankans, the caves in Dambulla protected the King during his 14 years of exile from Anuradhapura. It was here that he plotted to overthrow the invaders.

When he successfully regained the throne, the King built a magnificent rock temple here. Five caves in Dambulla have been turned into shrines. In the first cave, there is a 47-feet long image of Buddha, entirely carved from rock. In the second cave, the largest of all the caves, there are about 150 life-sized statues of the various Buddhist gods and deities. The ceiling is covered with frescoes detailing the life of Buddha and the origins of the Sri Lanka Sinhala people.

Reminders: As many areas in Sri Lanka are still new to the tourism industry, travelers are reminded to respect the island's traditional customs. For instance, visitors to the ancient cities should be dressed appropriately as such areas are regarded as sacred by the locals. Knee length dresses, long pants and shirts with sleeves are acceptable attire. Please remember to remove any hats or caps and footwear before venturing into a Buddhist or Hindu shrine. Please note that posing alongside or with religious statues are not encouraged as it is against the local customs. To avoid getting ripped off, use official guides with licenses issued by the Ceylon Tourist Board. Further information on Sri Lanka can be obtained from the Ceylon Tourist Board at 80, Galle Road, Colombo 03, Sri Lanka. Telephone: 437059 or log-on to http://www.lanka.net/ctb

Making for the Hills