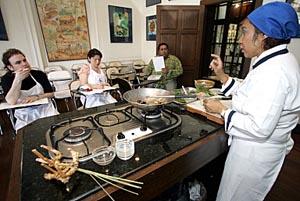 A class at the Blue Elephant cooking school in Bangkok, Thailand. 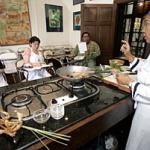 BANGKOK, June 20, 2005 - The maze of stalls at the Bangrak morning market stock a bewildering range of flavors in their neat piles of colorful spices, tropical fruits, fresh fish and fiery chillies.

But more tourists are learning to navigate the tastes of Thai cuisine with help from chefs who offer increasingly popular cooking holidays for everyone from backpackers to jet setters.

At the top end are luxury getaways like the Four Seasons Resort in the mountains outside Chiang Mai, where a six-day stay at a custom-built palace to the palate, designed in medieval Lanna style, can run over 3,000 dollars.

At the other extreme are countless home-style courses, sometimes conducted in the chef's own kitchen, that include a trip through the neighborhood market for as little as 10 dollars.

Somewhere in between is the Blue Elephant, an elegant restaurant that began in an old home in Bangkok and helped pioneer the cooking holiday idea.

Chef Nooror Somany-Steppe guides students twice a day through four Thai dishes in her gourmet kitchen, set in Bangkok's typically incongruous way amid sparkling high-rises, next to the mass transit SkyTrain, and across from a construction project abandoned after the 1997 financial crisis.

It's also just a few minutes from one of the oldest markets in Bangkok near the Chao Phraya River, the Bangrak morning market, where catfish flip in tubs hoping to escape the filet knife and coconut vendors grind their fruits and separate the cream from the meat.

The market sits next to a modern, air-conditioned grocery store, but the produce that lines the narrow, open-air paths was delivered fresh before dawn and is far superior, said Nooror's assistant, who goes by the name Breeze.

It turns out the shopping trip was purely educational. The actual ingredients have already been bought, washed and set out for the students in Nooror's teaching kitchen.

Many of the ingredients, like the three kinds of basil or the galanga, are widely available in the region, but she said most Asian grocers in countries further afield will stock them. And if not, no problem.

"Cooking, you have to be creative, like art," she said. "I teach you flexibility, so if you don't have something, you can still make it." Can't find palm sugar? Use brown sugar instead. No pomelo for a Thai salad? Try green beans, artichoke hearts or endives instead -- but add a tablespoon of coconut cream to the dressing, she advised.

"My spirit is more modern," she said, encouraging experimentation with ingredients.

Her spirit is not so thoroughly modern, however, that she would use a blender to show how to make the paste that is the base of Thailand's famous curries.

For that, chillies, coriander root and seeds, garlic, and cumin seeds went into the formidable granite mortar and pestle, where she pounded away until the mixture is a deep red paste.

That quickly became a roasted duck curry, with cherry tomatoes, pineapple and grapes. After each dish, the students headed across the corridor to the restaurant's big kitchen, where they recreated each delicacy with help from Nooror and her professional sous-chefs.

In one morning, she showed her class how to make Thailand's spicy shrimp soup, tom yum goong; pomelo salad; beef with oyster sauce and a spicy chicken soup.

The school attracts people who are both professional and home gourmets.

Paul Murphy said he heard about the course from workmates at home in Edinburgh, Scotland, and just wanted to learn to cook something different.

"Thai food is different from English food because it's fresh, with fresh herb and spices," the 29-year-old said.

Lee Kin-kong said he wanted to incorporate Thai cooking into his classes at a hotel and tourism training school in Hong Kong, but also hoped to dazzle his friends with his new-found skills.

"My purpose in learning Thai cooking is to teach my students," he said. "But I like Thai food, especially tom yum goong, and I'm always cooking Thai dishes for friends for dinner at home."

Bangkok has different options for different tastes. Kuppa Cafe has opened a cooking school to teach how it blends Asian elements into more international dishes, with results like hoisin duck pizza.

The Samui Institute of Thai Culinary Arts offers classes in traditional Thai food near the beach on one of Thailand's famous islands.

And the northern city of Chiang Mai is brimming with cooking schools, from the new Mandarin Oriental Dhara Dhevi -- where guests can stay in a villa with a private pool for 1,500 dollars a night -- to Baan Thai, whose name means "Thai home" and where classes are held in a home for about 15 dollars.