Thai Massage: It Hurts So Good 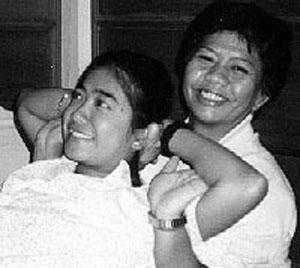 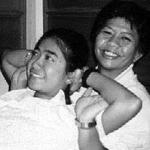 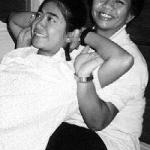 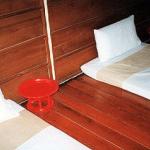 It was a defining moment. A sign outside a YMCA in the US read: Massage. $40/hour.

Grimacing, I thought, "Forty dollars?" In Thailand, a one-hour massage can be had for a twentieth of the cost. Should I march on the YMCA and cry "extortion"? More to the point, was there something wrong with me that I cared how much a massage cost?

There was something wrong with me: I'd become addicted. Dtit jai, as the Thais say: "stuck heart". Heart-stuck to the long line of Thai masseuses that had made it hurt so good.

I like to think of massage as "yoga for lazy people". In yoga there is a position called "the corpse", which entails lying on your back and breathing. This position - if you can call it that -- tended to be my favorite. As a renowned, sedentary educator once said: 'Whenever I feel like exercising, I lie down until the feeling goes away.'

So what could be better than lying down and exercising? Or being exercised, rather?

Novices beware: in Thailand, a massage parlor can simply be a front for a brothel. The massage bit is just foreplay for the other bit. And then there are a number of different kinds of massage, varying in the body parts targeted and the unguents employed: massage for face or feet, using oils, herbs, or camphor. The "safest" sort is usually called "traditional" and is simply a matter of refashioning oneself as meat to be tenderized. The most "dangerous" is sometimes called "special", which treads or crosses the fuzzy line separating physical therapy from "sex work", the now-fashionable term for prostitution.

A typical session in Thai traditional massage goes something like this. You enter a room where are a number of thin mattresses, between which are tokes, or small tables. On the tables are cups of steaming Chinese tea. (The tea is for afterwards: it's a good idea to keep your stomach and bladder empty before the session, as they will get squeezed.) On the mattresses are sets of cotton pajamas for you to wear.

Your masseuse is likely to be a middle-aged woman of some heft, with hands like vises. Overwhelmingly, Thai clients are male, so if you are a non-Thai woman do not be surprised if your masseuses fancy you a bit odd.

If it's a good parlor, the rooms will be air-conditioned and shielded from the noise of the street, so even before the massage commences you'll begin to relax. The masseuse usually starts by washing your feet with a cloth soaked in warm water. This washing will probably include the sensitive spaces between your toes. If you want to show off, the Thai word for 'ticklish' is chuck-uh-chee.

At this point, you may want to make a humble appraisal of your flexibility and general health. Thai massage, like certain forms of yoga, is always challenging, often painful - occasionally crippling. (A friend of mine once took part in a school meeting while lying in bed because a masseuse had wrecked her back.) If you want your masseuse to go easy on you, say bao noi. The word for pain, if it comes to that, is jep.

It is difficult to summarize in a few words the techniques of Thai massage. One would do better to consult one of the many thorough, well-illustrated books on the subject, like Maria Mercati's Thai Massage or Maxine M. Shapiro's The Dancing Meditation of Thai Traditional Massage. But a few highlights bear mentioning. The first is that a Thai masseuse uses many different and often the hardest parts of her body: legs, fingertips, elbows, knees, and arms. Often these are used in combination, so the massage can be a very contorting and entangling affair.

While undergoing Thai massage, it's best to regard your body as a limp puppet or a lump of clay. You will lie supine and prostrate, sit cross-legged, find your legs up in the air, or your heel dangerously close to your groin. The masseuse will crack the knuckles of your toes and fingers. She will bend your spine forward and backward, twist it clockwise and counter-clockwise until you hear a satisfying (or terrifying) crack. She will lean on pressure points until you can feel the blood pumping under your skin. Thai massage is far from painless, but the temporary pain gives rise to a long-lasting agility, a newfound respect for your body, and even mental serenity.

The serenity comes because your mind is in a fairly meditative state. Your eyes are closed; your breath is soft, and all you hear is the gentle banter of the masseuses. While they fold you like taffy, your mind empties out. After two hours of this (two hours is the standard length of a session), your vision will feel clearer, your mind more focused, your nerves calmed.

Like Thailand's food, its massage is so beloved by visitors that courses are offered in its techniques. And it is so beloved by Thais themselves that most towns will have at least one parlor. Far from being the province of a few loopy New-Agers or stressed-out jet setters, massage is an important part of Thai culture. Parents "do massage" for their children, and thus pass the skills down through the generations.

I, for one, would like Thai massage to catch on in the West to the extent that yoga has. On the other hand, if Hollywood starlets become as enthusiastic about Thai massage as they are about Pilates (or whatever it's called), forty dollars an hour at the YMCA will be a bargain.