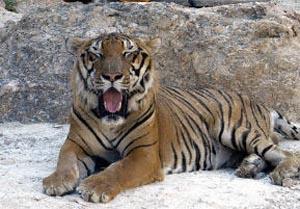 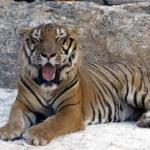 KANCHANABURI, Thailand, May 10, 2004 - Walking fully grown tigers on a leash is all part of a day's work for a group of Buddhist monks who have taken on the task of protecting the endangered animals by offering them a home within the walls of their temple.

The sanctuary is run by head monk Phusit Khantidharo, who insists all 10 tigers living at the Pha Luang Ba Tua temple in western Kanchanaburi province have adopted peaceful Buddhist ways. "We are a big family here and we live together, not just with the tigers but many animals," said Phusit, sitting cross-legged on a rock surrounded by five large tigers who take turns to affectionately nuzzle up to their saffron-robed master.

The tigers, with names like Storm, Lightning and Great Sky, live among monkeys, horses, deer, peacocks, geese and wild pigs in a scenic gully where they are free to roam and feed during the day. Visitors to the remote temple, about 200 kilometers (125 miles) west of Bangkok, are invariably stunned by the sight of the monks frolicking with tigers as if they were ordinary domestic cats.

One monk, who weighed less than half his furry companion, was bold enough to crouch down and mock fight with the big tiger, which gently lunged back with its deadly claws retracted. The monks have documented the personalities of all the big cats in a booklet with profiles varying from "likes to be a star and loves showing off" to "pretends to be tame and gentle but will bite."

The tigers, say the monks, are at their most frisky around dinner time when tourists are allowed to enter the gully to watch them eat. "We are Buddhist monks so we can't kill to provide them with food and so we give them dog food paid for by donations to the temple -- they enjoy the dog food," Phusit said.

The first tiger was brought to the temple in 1998 after being injured by a hunter, but died within days. Soon after, two very ill cubs arrived with large knife wounds in their stomachs. Inexperienced hunters had tried to cut them open and inject them with the preserving agent formalin in a bungled attempt to stuff them for a collector. Miraculously, they survived, and the temple quickly earned a reputation as a tiger haven. "When the villagers saw how we tended to the first tigers they brought others. Some were injured by hunters who had a change of heart, others by people who did not want the tiger near their village but also did not want to see it die," he said.

"The last cub to arrive had no hair as it had only just been born when its mother was killed," he said, adding that the monks had named the tiny cub Sengtawa (Sunshine). Despite the head monk's assurances that the tigers have chosen the path of non-violence, some devotees living at the temple bear scars that look suspiciously like the work of the big cats, and locals living near the temple say there have been a handful of maulings.

Sitting with his tigers, and three handlers who keep an eye on the beasts just in case they get excited by the visiting strangers, Abbot Phusit conceded that the temple grounds were a less than ideal home for his striped guests. "We have started building an area in which they can roam, of about 30 rai (12 acres), and eventually we want to send them back to the forest once they are ready to return," he said.

To return to the wild, the tigers would not have far to go. The temple sits on a small plain surrounded by jagged rocky outcrops about 40 kilometers beyond Kanchanaburis fabled World War II-era Bridge on the River Kwai. Smugglers still ply this thinly populated area close to the Myanmar border, where armed patrols on both sides keep watch on rebel armies and ancient contraband routes. But despite the remoteness of the region, the tigers are still far from safe.

The World Wildlife Fund (WWF) believes the rare tigers and the animals they feed on are still widely hunted in Thailand to maintain a steady supply of illegal tiger and other animal products. "We don't have an exact number for Thailand of how many tigers are left in the wild, but it varies somewhere between 150 up to a maximum estimate of about 500," said Robert Mather, who heads WWF's Thai operations, adding that the lower estimate was likely to be the most accurate figure. "But direct hunting here is not as big a problem as it is in Myanmar which still has more forest and so probably more tigers, with the bones going straight up to China (for traditional Chinese medicine)," he said.

Phusit said many of the temple tigers were wounded cats brought in from across or near the Myanmar border, and the flow of cats to the temple, as well as the cubs being born there, showed no sign of slowing. "Once we have built the enclosure we can keep about 30 tigers here, but we can only build it as fast as we raise funds, we have another pregnant tiger here and yes, I worry."