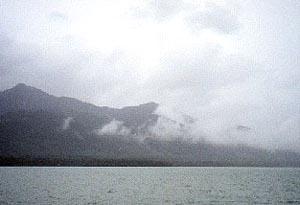 Ko Chang In the Mist. 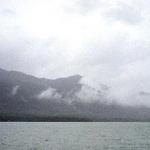 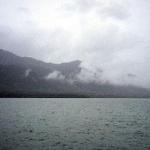 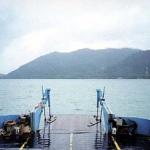 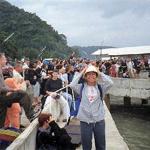 The first Thai island I ever visited was not known even to locals living a short distance away, and it does not appear on any map I have seen. This is not terribly surprising, in that the entire perimeter of the island of Ko Boo Boo can be traversed in about 15 minutes. The island is reached, moreover, by a death-defying ride on a thin skiff over choppy seas, which the boatsmen themselves are not particularly eager to ply. I was lucky to have seen Boo Boo and not the bottom of the ocean or the fins of circling sharks. In any case, I and all of my belongings arrived at Boo Boo a bit waterlogged.

When our party of six set foot on Boo Boo, we more than doubled the island's population. Staying there were only two German tourists, the owner and skeleton-crew staff of the bungalows and restaurant, and a cheerful boatman, who did precious little else all day except smile while lounging on a long bench.

We paddled canoes to a nearby island, reputedly owned by a Thai millionaire. Before the Asian financial collapse of 1997, he was building an enormous compound on the island for his retirement. Now the compound was no longer being built. In fact, it was already starting to fall apart, and the jungle had begun to reclaim it. A few of the millionaire's employees remained on the island to guard the compound from thieves.

On Boo Boo I first witnessed the phenomenon of phosphorescent algae (duly celebrated in the film The Beach), and first felt that profound tranquillity called ataraxia by the ancient Epicureans.

Probably Thailand's most famous and notorious islands are those of the Samui Archipelago - Samui, Tao, and Pha Ngan**. Indeed, the leap-frog ruination of these islands by tourism forms part of the motivation of that culture-bearing book, The Beach. Says the protagonist Richard:

"Before I'd been looking at [Pha Ngan's main beach] Hat Rin with a detached curiosity, and now I was looking at it with hatred.... Most of all, I could pick up the sense of decay. It hung over Hat Rin like the sandflies that hung over the sunbathers, zoning in on the smell of sweat and sweet tanning lotion. The serious travellers had already moved on to the next island in the chain, the intermediate travellers were wondering where all the life had gone, and the tourist hordes were ready to descend on their freshly beaten track."

I did not bother to confirm this "decay" in the case of Samui - I had seen enough signs and brochures for posh resorts, and heard enough stories from the international travel-set. (Samui has its own airport now, and is a stop on the route of a luxury cruise liner). But Pha Ngan disturbed me as much as it did Richard, even though the island is still not as developed as Samui.

Why, I wondered, would Westerners go to such lengths, and travel such distances, merely for the sake of a dance party? Especially when the rubbish this party generated was beyond measure appalling: empty beer and water bottles bobbing on the edge of the sea, lining the roads. In the minds of the locals, perhaps the revenue generated was fair compensation. Still, it was hard not to wonder how much choice they had in the matter.

Even the ferry rides between the islands were marked by this prodigal festivity. Once, in one of the ferry's empty cargo holds, Englishmen and Australians played football, while on deck someone played a pipe and others sang "What A Wonderful World It Would Be." Beer bottles and soda cans rolled back and forth in rhythm with the ferry's rocking.

Despite this, Pha Ngan still offers places beyond the corrupting reach of the tourist throng, e.g. the hill near Hat Rin. Here a friend of mine rented a bungalow for about $25 a month. The view it offered of Hat Rin and the topography of the island was captivating. And at night, while the full moon beamed through holes in the thatch, the dtoom-dtoom-dtoom of the party's open-air disco seemed as natural and eternal as the sound of waves breaking on the shore.

I had been to Boo Boo during the hot season, Pha Ngan during the cold. Thus there only remained one more season to experience on a Thai island, and that was the rainy season. Only after embarking on my journey to Ko Chang did I learn that the rains make the islands quite dismal, and often inaccessible. Many tourist establishments on the coast and on the islands close up shop.

To get to Ko Chang, one travels south from Bangkok on Route 3, through the city of Trat to the coastal town of Laem Ngop. The ferries embark from a nearby quay. As my minivan started down it, people were running rather hysterically toward the shore or jumping into their cars, while the noodle-shop owners quickly secured loose objects and unfurled tarpaulins. A wall of rain was pushing across the ocean. Halfway down the dock, we got pounded. The rain did not abate. The ferry was going nowhere.

We, the passengers of the van, decided to return to Trat, where we spent the night in various hotels. The rain continued through the night and into the next day. But it had lessened somewhat, so we made the crossing to Ko Chang. The ferry was almost completely empty. The tile floor was wet, and one could slide back and forth on it. The concessionaires turned on some ear-splittingly loud Isan music, and proceeded to dance and sing in the Isan style.

The ferry ride took about 40 minutes, and we were dropped at Ao Supparot, or Gulf Pineapple. Making the same landing onto Pha Ngan, one is quickly assailed by tsong-tao drivers, who bark like querulous dogs the question, 'Hat Rin? Hat Rin? Hat Rin?' Aside from a couple of food vendors, Gulf Pineapple was deserted, nary a vehicle in sight. As we soon found out, transportation on Ko Chang is a matter of hitchhiking in the backs of pickup trucks.

Unfortunately, pickup trucks lack the roofs of tsong-taos. We were well up into the island's hills - and about halfway to our destination - when the rains came down with a vengeance. After a while, this gentle humiliation at the hands of Mother Nature becomes tolerable, and then it becomes enjoyable. Not so enjoyable is the nasty must that hangs about one's clothes, after days of being unable to dry them; nor the increased threat of malaria.

Most of my time was spent inside of a restaurant, hiding from the chilly downpours. Every few hours the waitstaff ran to close the sliding glass doors so that the water would not splash inside. In spite of the rain, many people swam, myself included. But the current of Ko Chang's waters is not to be trifled with. One of the restaurant owners reported that, just the day before, a 15-year-old Thai boy had been swept away to his apparent doom. Swimming parallel to the coastline, I too found myself being pulled out into the ocean, and swam like a loon to get back to safety.

To pass the soggy time, a group of workers from the restaurants started a pickup football match on the beach. The game continued until the incoming tide had submerged a quarter of the pitch. At night, at the beachfront Sabay bar, the waitstaff put on a fire show, replete with flaming batons and slings. Obviously, it had been staged for the benefit of the tourists. But the showmen frequently dropped or somehow managed to extinguish their flaming implements, so the intended effect of amazing native dexterity was rather diminished.

The rain continued for two days. The sun came out on the morning we departed.

The almost heroically prolific American writer William Vollmann has traveled extensively in Southeast Asia, and written about his experiences in the books The Butterfly Stories and The Atlas. In an interview, Vollmann was asked, Do you ever not write? (This is no joke: his current projects include a 3000-page essay on violence and a multiple-book cycle fictionalizing the European conquest of the Americas). Vollmann said that sometimes he could stand on a beach in Southeast Asia and be able to say, Yes. This is enough. I do not need to write about this.