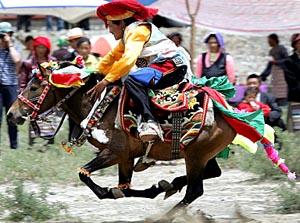 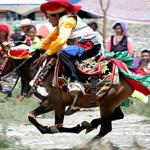 TSARA TOWNSHIP, Tibet, Aug 8, 2005 - The muffled thud of hooves on thick grass provided an echo of Tibet's distant warrior past.

For a few hours, as the people of Tsara on Sunday gathered for their annual horse racing festival, the traditional image of Tibetans as peace-loving Buddhists was put to the test.

Eleven horse riders, each representing one of the township's villages, participated in a fiercely contested race which showed that for some Tibetans, a horse is as natural a means of transport as a bicycle in other nations.

"Everyone here knows how to ride a horse," said Dzuqi, a Tsara resident, who was wearing the uniform of a civilian security unit.

The 11 horse riders, dressed in starkly colored black, white and red costumes, strode confidently among the spectators as they prepared for the event, posing proudly for photos.

When they mounted their horses, their dexterity was a reminder that the Tibetans were fierce warriors feared by their neighbors until they devoted themselves to the peaceful pursuit of Buddhism in the 9th century.

Even today, the best of Tibet's horse riders are celebrated as local heroes, much like football or baseball stars in the West. As the day's program culminated, each of the contestants took turns galloping at great speed down a 200-meter (660-feet) track, picking up long pieces of white linen, known as khatags, which were scattered along the way.

Khatags, also frequently referred to as "friendship scarves" by the Tibetans, have deep symbolic meaning here.

"Khatags are for good fortune, for all good things," said a woman from the Tibetan capital Lhasa 70 kilometers (43 miles) away, who was watching the event with the detached interest of a field anthropologist among alien tribes.

The Horse Racing Festival, originally an ancient Tibetan harvest festival, is celebrated in large parts of the Himalayan region, showing that despite 50 years of Chinese rule parts of Tibet's cultural identity remain.

For communities like Tsara township, it is the second-most important event of the calendar after the New Year.

A festive, carnival-like atmosphere reigned as a humming crowd gathered along the track, displaying a variety of headgear from American-style cowboy hats to traditional red tassels tied into the hair.

Vendors had set up shops selling everything from beer and cigarettes to children's toys.

The lengthy breaks in between the main events were greeted with great patience by the audience, although a mood of anticipation could be clearly discerned.

"We haven't got the results yet," said Tsamla, a 24-year-old peasant woman from Dyigye village, hugging her 18-month-old son. "Of course, I hope my village will come out on top."

There was more than just local pride involved for the spectators, many of whom had traveled for hours to attend the festival.

The horse riders received two yuan (24 cents) for each khatag they picked up, but they had to hand over the prizes to their village heads, who in turn were expected to distribute the money to the local communities.