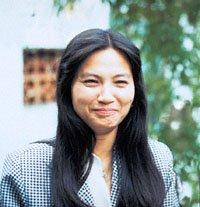 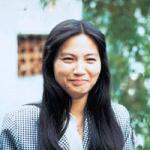 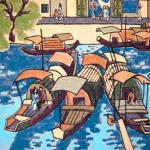 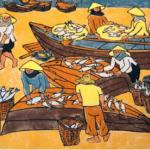 Tran Tuyet-Mai must be one of the most self-effacing artists in Hanoi. While many cannot stop boasting about their work, she doesn't even show her work that often. She lives quietly in a small flat on the grounds of the School of Fine Arts, where she is a professor. It is there that she is passing on to a younger generation the craft, and love, of Vietnamese traditional woodcut.

The Vietnamese woodblock craft is not as developed as Japanese or Western printmaking. But what it lacks in sophistication of design and techniques, it makes up amply with texture and a raw simplicity that can be exciting. Traditional woodcut prints are readily available in many galleries in Vietnam, depicting animals such as roosters, dragons, and pigs and rendered in broad strokes and bold colors.

Tran Tuyet-Mai has been able to retain in her prints old-style characteristics: thick lines, textures and bright colors. But what she has also achieved is the modernization of the images. Hers are more delicate, more detailed than the traditional Vietnamese prints, and the charm that she is able to convey is undeniable.

If you get to visit Tuyet-Mai, the quiet thirty-seven-year-old artist will usually arrange for her husband, Le Van, to be there, and he will do most of the talking. He is an accomplished painter of modern abstract designs, and has spent many years in Italy and other parts of Europe honing his skills. He, too, teaches at the School of Fine Arts and will delight you with views about the current arts scene in Vietnam. But if you're looking for something traditionally Vietnamese, stick with Tran Tuyet-Mai.

A graduate of the School of Fine Arts herself, Tran Tuyet-Mai has had her paintings and woodcuts exhibited in France, Italy, Japan and Sweden. Her prints are also in the permanent collection of Vietnam's Fine Arts Museum. She was the second-prize winner at the National Exhibition of Ten Years of Arts (1975-1985), and was honored again during Hanoi's The Fine Arts of The Capital exhibition in 1992.

Even though she lives and works in Hanoi, Tran Tuyet-Mai often draws on village life for inspiration. She travels when she can with her husband to sketch scenes of peasants replanting rice or going to the markets. Tuyet-Mai is also a master at depicting scenes on the water, as proven by her well-known print of the Gia-Hoi dock in Hue: sampans are moored serenely, but there is also a lively atmosphere, conveyed through the way Tuyet-Mai draws water and the tree in the background.

There are ten people in the print, and they are very small. Look carefully and you will see that they are all women. Indeed, Tuyet-Mai often includes only women in her prints, whether working the fields or going to the market. In the Gia Hoi print, a couple of older women in the Vietnamese traditional tunic are walking children to school. On one boat, a woman is cooking; on a neighboring boat another woman appears to have an intimate conversation with a grown daughter. It is astonishing that Tuyet-Mai can suggest such scenes in the woodcuts, which normally don't allow for terribly sophisticated details. But that is Tuyet-Mai's strength.

Tuyet-Mai's images stand out because of their delicate tone. Her classical training gives her an edge when she draws the human figures. But rather than a Western perspective, she uses stylized lines that evoke older Vietnamese designs. Her people appear short and even rotund, but without being stocky or comical.

Her prints are often full of movement and touching actions. She frequently uses pastel colors such as light blue and pale yellow, but she juxtaposes them well with other bolder colors so that her prints don't become overly precious.

Tuyet-Mai makes her prints on Vietnam's famous bark paper, giay do. Yearly, the printmaker makes pilgrimages to the village of Dong Ho where the paper originates. "Vietnamese woodblock printing is currently getting less attention than other art forms," she says, concerned that not enough people are studying the art of woodcut.

Tuyet-Mai fears also that without the necessary financial means, the School of Fine Arts cannot adequately teach the students. "Sometimes we don't have enough experts, and students and artists often depart from established rules."

Tuyet-Mai naturally would like woodblock printing to become better appreciated. But she is concerned about the commercial nature of the art market in Hanoi and elsewhere in Vietnam, which is why she rarely holds exhibits.

"Good arts and their true value can easily get lost in the current arts scene," she says. "We all must survive. But good artists must be willing to wait."