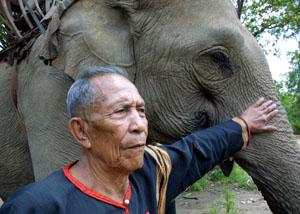 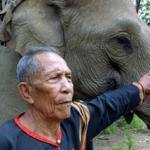 Buon Don, Vietnam - They call him the "elephant man", but it has nothing to do with his powerful, calloused hands, leathery skin and huge ears. Yprong Eban, 88, is Vietnam's greatest living elephant hunter. Since the age of 13, Eban has been hunting wild elephants in the remote forests near the Cambodian border in the Central Highlands, following in the footsteps of his father and grandfather before him. After capturing 298 elephants during his long career, he finally hung up his buffalo-hide lasso in 1996, choosing instead to spend more time with his 22 children and scores of grandchildren.

"Hunting an elephant is like fighting a battle. It involves human beings pitting their wits against these intelligent animals," he said. Caught not for their meat, hide or tusks, the elephants were kept for domestic use or exchanged with traders in Laos and Cambodia for buffalos, rice and other essential goods. "My grandfather, who was known as king of the elephant hunters, once caught a rare albino elephant and he presented it to the king of Thailand as a gift," he said.

A member of the Mnong ethnic minority, Eban spent his childhood years riding on the back of elephants. At the age of 17 he was officially recognised as a mahout -- a skilled elephant handler -- and quickly gathered a reputation for his hunting prowess and bravery. "Many people are frightened when they come face-to-face with angry elephants but you cannot be frightened otherwise you will fail. I thank my God that I am brave," he said.

Contrary to their docile cousins in zoos and circuses, wild elephants, particularly males on heat, can be extremely aggressive and are capable of inflicting serious injuries, sometimes fatal. Eban, clad only in a loin cloth and a traditional Mnong black tunic, has the scars to prove it. His right leg was nearly severed when a young elephant gouged him with his tusk. "I was fortunate that it was only a child. Had it been the leader of the herd I would be dead. I have seen four hunters killed by elephants during my time."

But elephants themselves are not the only dangers. His former hunting ground, now part of the Yok Don National Park in the central province of Dak Lak, is also home to tigers, one of 28 endangered mammal species in the 115,545-hectare (285,400-acre) reserve. "Once we were out hunting and a tiger pounced on our group and tore apart three of my companions. We could do nothing about it," Eban said.

Between 10 and 30 people would take part in each hunt, riding two abreast on an elephant. The length of each foray into the forests depended on their success in tracking and capturing the herds. "Sometimes we would go weeks without capturing an elephant," Eban said. "The shortest hunt I went on lasted three days. The longest was 48 days and during that time we caught seven."

Before setting out, he and his fellow mahouts would perform an elaborate, traditional ceremony to bring good fortune and keep them safe in the forests. Pigs and a buffalo would be slaughtered, copious amounts of potent rice wine drunk and the domesticated elephants taking part in the hunt paraded in front of the villagers.

The men refrained from having sex for a week beforehand. "I was able to touch my wife's hand but not to sleep in her bed," Eban said, a broad grin stretching across his weather-beaten face.

Given the extraordinary hearing ability of elephants, communication between the mahouts was restricted to sounds made by blowing through hollowed-out buffalo horns. Smoking was also prohibited in the forest. Once a herd was located, the mahouts would isolate one elephant and try to lasso one of its back feet. With the other end of the rope secured to a tree, the animal would then be lured into walking around in circles until it became ensnared.

After being left for a day with nothing to eat, the domestication process would begin and the elephant given food. The captured tusker would then be led home, coralled by other domesticated elephants. Besides the trauma of capture, Eban said the elephants suffered no physical harm. "But for some really enraged ones we would have to put a rope necklace with thorns around their necks to keep them from thrashing around." Depending on the animal's temperament, the domestication process could take anything from three weeks to six months.

"Elephants are very intelligent and a love soon grows between them and humans. In fact the bond between a mahout and his elephants is like that of a father and his children," Eban said.

Although his hunting days are now behind him, he has not abandoned his daily contact with the giant mammals, spending most of his time at the national park headquarters, advising the younger mahouts. "The park authorities have taken me in to preserve me," he said in jest. "But now I am also concentrating on being a father again." His third wife, a 32-year-old, is pregnant.