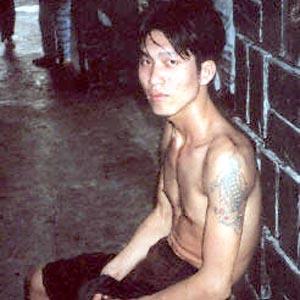 A young man with tattoos sits in the corner of a street in downtown Ho Chi Minh. 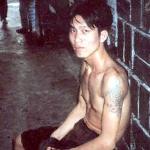 Tattoos, once reviled in Vietnam as the preserve of prisoners, gangsters and common foot soldiers, are becoming increasingly popular among the country's emerging 'MTV generation'.

In step with the international trend for tattoos as promoted by the likes of David Beckham and Angelina Jolie, increasing numbers of urban Vietnamese twenty-somethings are using permanent body art to express themselves. Young women with swirly designs on their lower backs and men with barbed wire designs or other patterns round their biceps or shoulders have become a familiar sight in Ho Chi Minh City's nightclubs and bars.

And the yet the concept of tattoos as a form of artistic expression is new to Vietnam, a country where tattoo parlours are illegal and where permanent body art is usually taken as a sign of criminal connections.

But Linh, a stunning 22-year-old with long painted finger nails, wavy brown hair and large sunglasses, says times are changing. "We think of tattoos as an art form now. They are beautiful, and that's why I got my tattoo," she says, referring to the 20-centimetre wide swirly design on her lower back. Linh and three friends marked themselves out as unapologetic members of Vietnam's new, and often highly privileged leisure generation, when they hired a tattoo artist to decorate their lower backs in a hotel room two years ago.

Her mother did not share Linh's taste in artistic expression and took a broom to her daughter after discovering the tattoo. "Most Vietnamese still think anyone with a tattoo is bad, but things are changing and young people have been getting tattoos as a fashion statement for a while now," says Linh.

But the underworld links remain. When Ha, 24, took her friend to the tattoo artist who decorated her back three years ago, she found he was in prison. "I don't know what his job was. He wasn't a full-time tattoo artist anyway. I think he might have been involved with the mafia," she says.

Those with highly noticeable, aggressive, tattoos are often returning American-Vietnamese or ex-refugees from camps in Hong Kong. Vietnamese gangs have become an established phenomenon in the United States since the fall of Saigon in 1975, with the gang members and prisoners often tattooing themselves. Pioneering the crime of home invasions and carrying out other crimes that focus mainly on members of their own communities, Vietnamese gangsters have developed a ruthless reputation there.

Present in their greatest numbers in Orange County, California, but also active in places such as Houston and Chicago, the Vietnamese have gangs with names like Wolf Boys, Black Widows, Local Boys (Chicago) and BTK (nationwide). Sergeant Ken Whitley, writing for the 'Convicts and Cops' website, says more and more Vietnamese parolees are getting 'inked'.

"They seem to like tats that show their birthplace, like maps of Vietnam on the back. 'Vietnamese Pride' under the neck, and dots or T's," he writes. The four T's, usually written in a Gothic style script, stand for Tinh (love), Tien (money), Tu (prison) and Toi (crime).

The initials 'NCA' are also popular among Vietnamese-American gang members, the letters standing for 'Ninja Clan Assassin'. Dots made by cigarette burns are also used to designate gang membership, with three burns in a triangle meaning 'toi khong can gi ca' (I don't need anything) and five meaning 'tu hai giai huynh de' (all men are brothers).

Giang, a small, hard-faced and plainly dressed 32-year-old from near Haiphong, is not the kind of Vietnamese woman you would expect to have a tattoo. And yet not only does Giang have a crown on the back of her neck, she makes her living by tattooing, either in her incognito parlour or at clients' homes. "There are two kinds of tattoos in Vietnam: the ones people used to get, which mostly indicated a link with crime or intimidation, and tattoos for art or beauty. People have only been getting the arty ones for about two years now," she says.

"Most of the tattoos I do now are the sexy ones. Men make up the majority of my customers and they tend to get tattooed on their arms. But I get a lot of women too. Some of them are prostitutes, but a lot of them are ordinary women," she explains.

Giang does most of her tattoos at clients' homes because most Vietnamese don't want to be seen going in or out of a tattoo parlour, even one which is not marked as such. "I'd like tattooing to be seen as an art form like in other countries and not as something that is bad and illegal," she comments.

But one form of tattooing enjoys legitimacy in Vietnam. Tattooed eyebrows are a popular method of corrective surgery in Vietnam, and women seeking the perfect arch can check into hospitals as well as self-trained beauty specialists to have the operation done.