An Abolitionist for Elephants 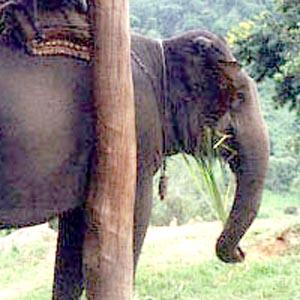 An elephant, near Mae Rim, Thailand. 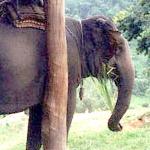 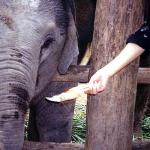 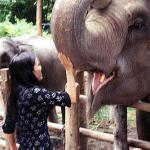 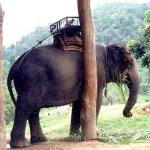 Lek, director of Chiang Mai's Elephant Nature Park and a National Geographic "Heroine for the Planet", is going to be a mother - of sorts. One of her elephants is pregnant, and she is as nervous and excited as a mother-to-be. "Normally," she says, "I'm very tired. Today I can smile because I heard the news that my grandmother will have a baby."

Lek's "grandmother" is 87 years old. For elephants, pregnancies usually become impossible after age 45. "It's amazing," Lek says. "She will be the only one in the world to have a baby at that age."

The pregnancy alone is good news, because so much of Lek's news about the elephants is bad: sickness, cruelty, poaching, death. Thailand's elephants are disappearing. Lek and her volunteers are among a few people who care. I didn't care until I met Lek.

Lek is a busy lady. She is in and out of her office, up and down in her chair. When I showed up for our appointment, two filmmakers had beaten me to her. Ringing telephones bewildered the office staff. Often Lek had to interrupt herself, switching quickly from English to northern Thai in order to give instructions. Volunteers showed up out of the blue to say goodbye, give a hug, hand off some photos. Lek is a little lady, schoolgirl size. She has the wide shoulders, thin hips, and square face often characterizing the Hill Tribes, Thailand's indigenous quasi-citizens. Lek is shy to admit her origins. "Khamu tribe," she says, under her breath. There is only one Khamu village remaining in Thailand, she explains, and the Khamu have traditionally been slaves.

Lek is anything but slavish. A few days after my interview with her, she was headed to Bangkok to speak before the (male-dominated, Kafkaesque) Thai Parliament in defense of a piece of legislation. The "Elephant Charter" is intended to protect elephants from cruelty. The two filmmakers intended to follow her.

The filmmakers are making a documentary. Its purpose is to show that humans are swiftly losing the emotional benefits of interacting with animals. Lek, who admits to spending more time with elephants than with her husband, would probably agree. When Lek was young, her family had an elephant at home. "The elephant was like a member of the family," she says.

But she is much more concerned about elephants than humans. "Sometimes I think humans are hard to understand," she says. "A human sees something and says, 'Oh, this is nice.' But elephants have more than that. They have sincerity, and they love with their whole heart. I get into trouble with humans because they don't keep their word."

Her case for distrusting humans is extensive. As a tour guide, she visited elephant shows and would explain to the tourists how the elephant tricks -- standing on hind legs, playing basketball -- were unnatural and cruel. Tourists, she complains, "are interested in elephants only as entertainment." The show directors often banished her.

Meanwhile, potential financial donors often only want to use the elephants for personal profit. Even some so-called volunteers have mercenary or ulterior motives. "I had one volunteer from Britain. He came and did fundraising - for his own pocket. Some volunteers came for a long time but didn't care. They just used my place to go and smoke marijuana."

Long-term volunteers can also be a bane, because the elephants become attached to them. When the volunteers leave, the elephants become heartsick, and sometimes mortally ill. Lek tells me about a volunteer named Maria and the baby elephant under her care. "When Maria left," she says, "the baby elephant got very sick. He didn't survive. He died after that. That's why I don't want volunteers to stay for a long time. We could not explain the baby's death. Suddenly he refused food. He became very weak. We tried a lot of things. But we couldn't help him."

So Lek does much of her work alone. Unfortunately, the cost of caring for elephants is extremely high. One animal requires some 300 kilograms of food every day. They need land, medical care, round-the-clock attention. As we are talking, Lek plunks a repulsively organic, soft-ball-sized pellet onto the table. Elephant herbal medicine, she says, smiling and tossing the pellet up and down.

Formerly, elephants were an integral part of the Thai life and economy. They served as transportation and as part of the logging industry. But automobiles have replaced beasts of burden for transport, and the Thai government banned logging in 1989 in order to slow or reverse Thailand's catastrophic deforestation. Ironically, this well-intentioned attempt to save the country's trees displaced the country's elephants.

"The situation became very bad," says Lek. "Elephants had no job, so they suffered and their mahouts suffered. The elephants had no food because the mahouts had no food for their own families. So when the owner of family had no income, they would sell the elephant. I followed the sales case by case. A month after the sale I would find the next owner and learn what happened to the elephants. Some died. Some were sick." Mahouts lead their elephants through the congested and polluted streets of Thailand's metropolises. To prevent cars from smashing into the lumbering beasts, the mahouts attach blinking red lights to the elephants' tails. The mahouts sell food to passersby, who in turn feed it to the elephants. But it is seldom enough.

The day after the interview I am in a minivan with the filmmakers, Lek, and a few of Lek's volunteers. We are headed north from Chiang Mai to the Elephant Nature Park, somewhere near Mae Rim. On the way, we stop at two markets so that Lek can buy fruit and vegetables for the elephants - watermelons, pineapples, cobs of corn. "All the money goes into the elephants' stomachs," laughs Lek. "Big savings accounts!" The camera crew follows Lek through the crowded markets, while the locals look on curiously at Lek's western entourage.

Once at the Park, Lek spends a good few hours feeding the elephants, which line up like pigs at a trough. She notices that one of the creatures has a stab wound on its snout. The veterinarian applies iodine to the wound and stitches it up.

As I watch the animals, I try to sympathize with Lek's idea that they might be more enlightened than human beings, more noble. There certainly is something about their eyes, something pensive and sad, as if they know their own fate as a species. Many of them are chained at the foot, and must lean their weight on their free feet to reach the food.

"My dream," said Lek the day before, "is a big home: a thick forest with a green grass field. I see the elephants released with no locks, no chains.... You don't know what it is like when they stay with me in the jungle. They are the most beautiful animals when they are in their own place. They are not the same in the camp. Because they have to obey the humans." I could have been listening to Rousseau: "Man is born free; and everywhere he is in chains."

The writer Milan Kundera has suggested, in The Unbearable Lightness of Being, that the final judgment of mankind's morality will derive from its treatment of animals. You cannot say that a person is kind if they treat you kindly, because they may only be expecting something in return - favors, allegiance. Animals, he says, lack such guile. If we treat them well, we are genuinely good. If cruelly, cruel. Because we get nothing substantial from them.

Yet the Darwinist stance is so hard to refute: the elephants are merely casualties of natural selection. They are too big, too slow, too dumb. While I am watching one elephant, an enormous cataract of urine gushes out of its bladder and pools around its feet. It eats on, oblivious. Surely, I think, there is something ignoble in that?

When the feeding has finished, it is mating time. It is rare for elephants to mate during the daytime, in full view of people. But one male apparently had eyes for a female, and to make the spectacle all the more charged with pathos, the female happened to be blind. The mahouts led the males, one by one, to this blind, old, chained female, and one by one the males probed her with their trunks and then walked away, uninterested.

It is quite miraculous that elephants can mate at all. The male must first coax the female's backside down with his head. Then he stands on his hind legs at about a 45-degree angle to the ground. His pillar-like front legs go on the female's back. To compensate for this awkward, nearly life-threatening position, nature endowed the male with a prehensile penis. That's right: prehensile. It moves as voluntarily and as dexterously as an elephant's trunk, and is as big as a baseball bat. Finally, one male gave it a go, but seemed to succeed only in squirting his sperm all over the female's wrinkled and dusty skin. And then something really terrible happened. The male somehow got the female pointed toward the sloping bank of a nearby stream. In his determination to bring the act to a successful close, he pushed the old, blind, much-jilted and sperm-smeared female to the top of the bank, until her legs buckled and she slid down, disappearing from view. The male gazed stupidly down at her. Most of us didn't know whether to laugh or cry.

"He has been here three years," says Lek, translating the words of one of her Thai volunteers, "and he has never seen elephants mate." I am lucky to have seen it, though it had been a total disaster. (Well, not a total disaster: the female came out unscathed, physically if not emotionally.) We are back in the minivan. The day has been a long one for everybody, but Lek is still cheerful. Except when she hands me a couple of flyers she is planning to distribute to tourists in Chiang Mai. One flyer details the cruelties involved in making elephants do tricks; the other discourages feeding street elephants. "Suppose," I say to Lek, "someone were to say, 'If we do not feed these elephants, nobody else will'? What would you say to them?" If people want to help elephants, she says, they should give directly to organizations that support them. Elephants are not supposed to be walking around in cities. They are supposed to be living in forests.

This is Lek's dream, to give the elephants their own forest from which humanity is barred. I wish I could believe that it will happen. But something Lek and the filmmakers said sticks in my mind. Korean men, believing that eating elephant meat gives them sexual potency, buy this meat illegally. The stupidity of humans seems to know no bounds. Except when it comes to making guns, which know no barriers.

Lek can be reached at lek@thaifocus.com.