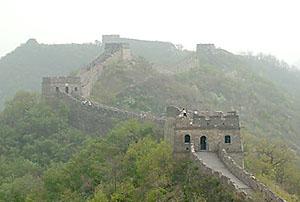 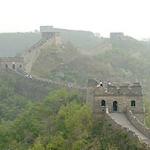 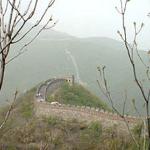 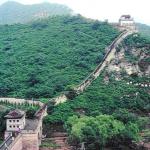 As we take the highway to the Great Wall, it is obvious that my friends and I are not the only ones who have decided to see the wall during the May Day holiday. Most of China seems to be with us here on the highway to Mutianyu, one of the prime places for tourists to see the restored wall. Mutianyu is only about fifty miles northeast of Beijing, yet with all the traffic it still takes over two hours to get there.

Badaling, a viewing spot closer to Beijing, is supposed to be much more crowded than Mutianyu, but that's hard to believe when I see all the people at the base of Mutianyu. Just to get to the cable car that will bring us up to the wall, we must wade through vast throngs of people - many of whom are desperately trying to sell us something.

They sell the same types of souvenirs that I am used to by now - countless t-shirts, Buddhas, scrolls, and other "traditional" Chinese items. Water sales are also brisk, and we wisely stock up on some bottles. It doesn't yet seem very hot, but it will when we start climbing. Unfortunately, as on most days here, the weather is quite hazy. I had hoped it would be clear for once, but even here, away from the city, pollution obscures the view.

To be honest, the wall is not as tall as I had expected, but it's much more beautiful - especially against the lush, green backdrop of the hills around it. In fact, the hills are so impressive that they may have been even more imposing than the wall itself. Then again, to invaders, the wall must have seemed like a slap in the face. After climbing all that way, who wants a wall to climb over?

As we step off the cable car and start to walk on the wall, the haze that disappointed me earlier now just makes the place seem all the more mystical. I can't see too far down the hills, but the haze produces a real calm. Luckily, while the base is crowded, there actually aren't that many tourists here on the wall itself.

My friends Peace and Bai Li have both walked the wall before. Neither is interested in doing it again, and so their plan is to sit on the wall and chat while I climb the tough part. Peace has even taken her binoculars with her. "We'll watch you as you walk up," she tells me as I merrily start on my way. I think that she is joking, but little do I know that she is actually telling the truth. I later learn that they follow me all the way. Every time I stop - and admittedly I take many breaks - one of them will shriek, "Oh, no, why's he stopping now?"

The answer? Because I'm out of shape. There is nothing quite like a giant wall built over two thousand years ago to remind you that your workout regiment is sorely lacking - with particular emphasis today on the word sorely.

At first, I walk too quickly, but I'm excited. I feel as if I want to walk the entire wall. Gradually, though, reality sets in. From a distance, it doesn't really look that steep, but all the little peaks and valleys take their toll. And then there's the heat. While earlier it had seemed cool, now it is sweltering. I make a mental note to stop guzzling all my water.

There is water on sale up here, but it's wise not to drink it. Often, I will walk past men standing against the edge with a few bottles of ice water at their feet. Peace calls this "fake water." No doubt, it was simply bottled from a tap down below.

Eventually, I do make it to the top, even if my friends must be growing impatient with my frequent breaks. I suppose I don't officially go all the way to the top, but I do reach the end of the restored wall. A sign there reads, "No Passing. Path Unavailable," though a few hearty souls have kept climbing. It's not like there's anyone here to enforce the rule, but past this point it's mostly rock climbing.

I consider joining them. Another thirty minutes and I could reach the top of the hill and look down on the other side. But I'm tired and out of shape. And my rock climbing skills are non-existent. Besides, there is no shame in stopping now where everyone else is stopping. With a shrug, I turn around. I never do find out whether Peace and Bai Li are disappointed.

I walk down to the base, and after a quick meal we are back on the road. I nestle into my seat, prepared to stare at traffic for two hours, but our taxi driver has other ideas. Since we have him for the whole day, he decides to take the long way back.

He drives us west behind the hills and then turns south. Something miraculous occurs. The smog and clouds that have engulfed Beijing for my entire trip disappear, and I see blue sky for the first time since my arrival. He drives us over plush hills and valleys that look like they belong in Ireland. Everything is so green, and the sky is so clear. We drive past several small villages. Except for the occasional satellite dish, the villages look poor and desolate, yet also peaceful. We seem far removed from the bustle of Beijing, even if we are only about fifty miles away.

Our driver is quite friendly. Whenever I want to take a picture, he pulls to the side of the road so that I can get out. Once, he pulls over for no apparent reason and climbs a hill next to the road. A few minutes later, he comes back with dozens of small, green apricots and hands some to us. "In the city, they charge money for these, but here you can just pick them off the trees," he gushes to Peace in Chinese.

I pop a few in my mouth, and they are the most God-awful apricots I have ever had. Well, they might be nice in a few days when they are ripe, but for now they are so sour that I can't taste one without cringing. I try to be polite. I smile as I eat them and give a thumbs-up sign, as I try my best not to grimace from the taste. With a smile, he keeps handing me the damn things, and I keep tossing them down my throat, trying not to gag on the sourness. He was only gone a few minutes, but somehow he has an endless supply of these apricots.

Finally, through Peace, I tell him that I'm full, but thank him again for the wonderful fruit. I then lean back in my seat and watch the beautiful hills and the clear, sunny skies. After days of urban sprawl, it's a real treat.