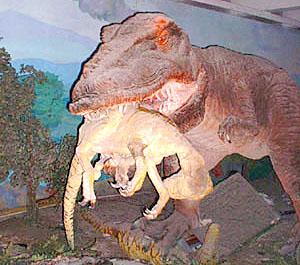 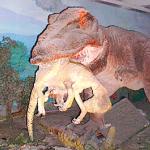 Tiananmen Square, the Forbidden City, the Great Wall - these are some of the best-known sites around Beijing. Come back from Beijing without visiting them, and people will look at you as if you are crazy. But, sometimes, the less popular sites are the most revealing - like, for example, Beijing's Natural History Museum.

My friends and I have come here by accident. It just happens to be near Tiantan Park which we are visiting later, but it's such a silly and tacky museum that it's well worth the trip. Name another science museum where Godzilla action figures are the most prominent item for sale in the gift shop.

We start by strolling through a large section devoted to the sea - where too many fish swim in tanks too small with almost no vegetation. As I wander through, I feel terribly sorry for the fish. The concrete on the walls of the fish tanks is so chipped that the poor fish might as well be swimming in a pool at some abandoned motor lodge. A few rooms have been renovated slightly, but for the most part this is essentially the ghetto of the aquarium world.

We then go upstairs to see the dinosaurs. Like any natural history museum, the dinosaurs dominate here. There are about a dozen giant dinosaur models spread about the museum, though the exhibits would probably look more impressive if the dinosaurs weren't bumping their heads against the exposed pipes on the ceiling.

After a few minutes, there is a blackout. Emergency lights go on, but all the visitors continue to tour the museum as if nothing happened. I'm told that blackouts like this are common in Beijing. To me, however, walking through a museum of dinosaurs with only emergency lights to guide you seems anything but common.

We reach one particularly dark room, and it feels as if we are entering a fun house. Dimly lit fake dinosaurs peer out at us, and we all jump when suddenly the electricity comes back on. That's because these aren't just rubber dinosaurs; these are mechanical rubber dinosaurs. The dinosaurs have stirred to life in a flash, and for a moment, I feel that I am about to be dinosaur dinner.

The dinosaurs move up and down with various loud sound effects, thanks to a woman in the corner who operates the controls. One particularly peckish dinosaur even has a giant rubber carcass of a smaller dinosaur in his mouth, as the woman makes his head bob up and down.

These are not the life-like dinosaurs of Jurassic Park, however. They lumber up and down with slow staggered movements, looking obviously robotic. The sound effects, meanwhile, seem to have come straight out of a cartoon. It's the silliest science museum I have ever visited. I'm so glad we came.

It gets even sillier when we leave the dinosaur section and stumble upon a Poll Position video game from the 1980s. After all, what natural history museum is complete without Poll Position? My friend Brian takes a moment to relive his youth, and then we head outside to the adjacent building that holds the exhibit dedicated to humans.

Inside this building is a series of disgusting yet oddly fascinating displays. This is like no museum exhibit I have ever seen. Near the front is a real cadaver in a vat of formaldehyde. It's split down the middle so that we can see all the intestines up close. Next to that are all sorts of body parts floating in jars of formaldehyde. I feel as though I'm inspecting Jeffrey Dahmer's fridge.

The walls here are covered with various medical oddities. There is one picture of a hermaphrodite. Another picture is of a topless woman with enormous breasts; it appears to have been taken on the set of an American daytime talk show. In the corner, there's even a fetus in a jar.

A guard glares at me when I take out my camera. Apparently, no pictures are allowed. Perhaps that is a good thing. These pictures would certainly not belong in any vacation scrapbook.

My friend Peace leaves after just a few seconds. "I am not looking at pickled people!" she announces firmly as she walks outside. Meanwhile, Brian and I decide that lunch after the museum visit might not be such a great idea. Neither of us has an appetite left.

Luckily, it's only a small room. The museum is being renovated, and I get the feeling that some of the other exhibits are in storage somewhere. For that, I'm thankful. By now, I have no desire to see any more cadavers. I'm more than happy to leave the pickled people behind and go play with the rubber dinosaurs.