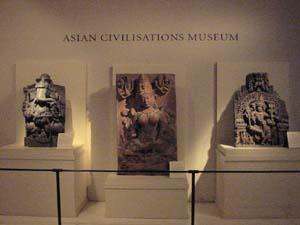 The Asian Civilization Museum on Armenian Street re-enacts the different stages of human culture in Asia. 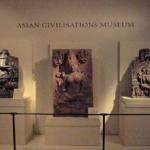 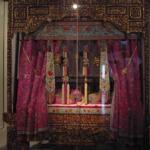 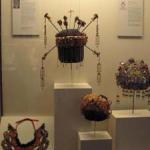 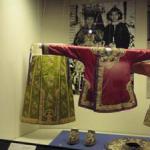 
From the earliest inhabitants that roam the Malay Peninsula during the Mesolithic Days to immigrants from China, the Middle East and India who eventually made South East Asia their home; each has contributed to the rich multi-ethnic heritage of South East Asia. The Asia Civilization Museum, the youngest among the three National Heritage Museums in Singapore, traces the cultural history of South East Asia in general and Singapore specifically. Items on display centre on the material cultures of the various ethnic groups that make up the Singaporean society today. Located along Armenian Street and surrounded by numerous colonial styled buildings, the Tao Nan Building which houses the museum itself is a cultural relic in its own right. This building, a neo-classical structure dating from 1910 was previously a school established by the Singapore Hokien Huay Kuan. The Tao Nan School is the first modern Chinese school in Singapore to introduce Mandarin as the medium of instruction and accept students from different dialect groups. One of its 110 founding members was philanthropist Tan Kah Kee, who donated generously to the school. Philanthropist Lee Kong Chian was educated here. Designed in the style of the late period of the Renaissance in France, it is the only structure in Singapore sharing two hexagonal side wings similar to the ones at Raffles Hotel. Among the many galleries on display at Tao Nan Building's Asia Civilization Museum are an entire host of Chinese culture items, including Chinese literati, paintings and even a replica of the Terracotta soldiers from Xian! These soldiers, life-sized statues made from terracotta are believed to be built during the reign of Emperor Shih Huang Ti. When he passed away, the terracotta soldiers are buried around his tomb -- signifying that he is protected even in death.

"The Four Treasures" of a Chinese Scholar


At the Chinese literati section, a life-size Chinese scholar desk, complete with the scholar's objects is placed at the entrance. The Four Treasures of a Scholar is the writing brush, ink, ink stone and paper. These treasures are highly prized because it is an indication that the owner is educated. At the gallery, different types of seals are on display. Such seals bear the names of its owners and are used in the olden days as signets attesting the identity of the calligraphers or painters. In all ancient Chinese writings or paintings, the seal marks denote connoisseurship and authenticity of the respective work. Such seals are made of a wide range of materials -- jade, stone, copper and porcelain. Another striking scholar object that demonstrates the high-quality craftsmanship of old Chinese sculptors is paper weights. These paper weights are most popular among scholars during the late Ming period (sixteenth to seventeenth century). The paper weights are used to keep paper in place and maintain it flat and smooth. It is usually made of materials such as copper, iron, jade, porcelain or redwood. The bronze paper weight on display at the Asia Civilization Museum is crafted in the shape of a reclining lion with a half-asleep expression. The lion's features are firm and precise -- a marvel considering ancient craftsmen only use very basic instruments to carve such brilliant works of art.


At the other end of the Chinese collection, there is a large ancestral altar. Here, visitors can see and read about the traditional Taoist or Buddhist altar, a common feature in traditional Chinese homes. A small section is dedicated to items from the Laiyantang Collection. This mini exhibit features almost 100 gold and silver objects from the collection of Mr. and Mrs. Mason Wong of Hong Kong. Highlights include ritual and burial objects in animal and human shapes, gold and silver inlaid vessels and belt hooks from the Han Dynasty period as well as silver vessels from the Tang Dynasty era.

Baba and Nyonya: Unique to Malaya


Another distinctive culture that is peculiar to Malaya (now Malaysia and Singapore) is the Peranakan (Baba and Nyonya) culture. Here, visitors can understand more about this unique blend of Chinese, Malay and European Legacy at the Peranakan gallery. Proud of their historical links with China, many of the Chinese ceremonies and traditional practices of ancestor worship are practiced, albeit with some changes here and there. From as far as the fourteenth century, Chinese traders who settled in Malacca and later Penang and Singapore have adopted many local customs. Although they consider themselves Chinese and follow many Chinese traditions to the hilt, the Peranakans have added a distinctive local touch to such practices. Many of the traders also marry the local Malays, resulting in many mix-marriages children who could not speak a word of Chinese by the nineteenth and twentieth century. Besides formal traditions, the Peranakans also tend to commission work from Indian, Chinese, European and Malay craftsmen, resulting in a hybrid mixture of cultural material in their homes. Many habits and practices are also acquired from the locals. One of the best examples is the sireh-chewing (betel-nut chewing) culture learned from the Indians and Malays. This trait of chewing sireh sets the Peranakan apart from the other Chinese immigrants that make their way to Nanyang (the Chinese name for Singapore) in the late nineteenth century. On display at the Asia Civilization Museum are sireh sets made out of silverware that contain all necessary ingredients and implements for betel-nut chewing.


Elaborate wedding practices are another exclusive feature of the Peranakan community. An intricate wedding bed -- complete with well-crafted poles as well as carefully embroidered bedcovers and pillow cases are on display. A Nyonya bride is also adorned in an elaborate costume and decked in fine jewelry on her wedding day. On her head is a decorative headgear made of gold or silver, huge earrings, a completely embroidered baju kebaya and with expensive brocade shoes completing the attire. No wonder then a typical Nyonya wedding takes at least six months from the initial agreement between the families to the Big Day. According to Peranakan customs, the bride-to-be has to personally embroider her wedding costume. A young Nyonya's worth as a bride is judged by her skills in beading and embroidery -- something akin to demonstrating her patience and proper upbringing as a classy Nyonya lady. The embroidery designs are usually drawn from symbolic Chinese sources, while the materials and thread used are as diverse as expensive Chinese silk, European velvet and the local batik material. Visitor curious about the Peranakan cuisine can log-in to the electrical terminals located outside the Peranakan gallery. Here, easy-to-prepare Nyonya food as well as a brief history behind each dish is explained. After selecting the recipes, simply e-mail it to yourself and to your friends to try out at home.

Spirit of a Community: Mosques in Singapore


"O ye who believe!
When the call is proclaimed
To prayer on Friday,
Hasten earnestly to the
Remembrance of Allah"
Surat al-Jumu'ah (Friday), Verse 9


This simple call for prayers greets visitors upon arrival at the Mosques of Singapore display on the third floor of the Asia Civilization Museum. At noon on Fridays, Muslim men all over the world, Singapore included, will throng the mosques to fulfill their religious rites. Why is Friday a holy day and what do Muslims do in the mosque on that day? Visitors can understand such Muslim practices better via the virtual walk-through at the Asia Civilization Museum. Non Muslims will understand a mosque is more than just a place for prayers -- it is the centre of the Muslim community. For instance, babies will first have their heads shaved by an imam (holy man) in a special blessing ceremony. School going children will attend religious classes at the mosques to learn more about their religion. Besides that, a mosque also serves as a community center where Muslims gather in traditional villages. Other highlights of this exhibition are the photographs of mosque architecture and even the opportunity to explore the interior of a mosque close-up through a Virtual Reality Tour via the electronic kiosks.


For those interested in the Asian culture, there are even more attractions to come. The museum is currently undergoing development and a second phase of the museum will be housed at the Empress Place Building, a short walk away from its current location. Upon its completion by the end of 2002, th new building will become the main Asia Civilisation Museum, whilst the existing Tao Nan Building will focus on the Peranakan Culture. To be spread over three levels and covering over 14000 square metres of floor space, the new museum will be divided into its own thematic galleries. If funds permit, the National Heritage Board intends to include state-of-art displays and interactive technologies to revamp the entire museum concept. This new emphasis of people friendly museum is part of the public outreach project to encourage wider interest among society on culture and history. Film screenings, evening talks and evening as well as outdoor performances will be held to complement the exhibitions. A more recent attraction is the unveiling of various statues placed within the Asia Civilisation Museum and on the walk-way right up to the Singapore river. These statues depicts today's Singapore society: with statues of people of all ages and racial backgrounds.

The Asian Civilisation Museum is currently located at 39 Armenian Street, Singapore 179941. Opening hours are 9am till 6pm on Tuesdays to Sundays. The museum opens until 9pm on Fridays and is closed on Mondays. Guided tours are available twice daily. Besides numerous buses, the museum is a ten minute walk from the City Hall and Dhoby Ghaut MRT Stations. Tickets are priced at SGD3 per adult, and SGD1.50 for students and senior citizens.