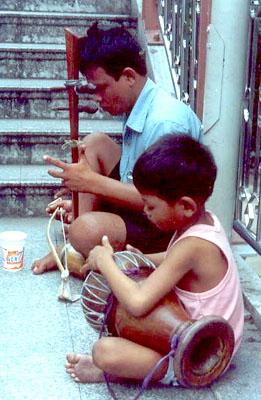 A boy beats on a drum while his father plays a Thai saw. 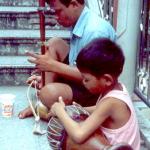 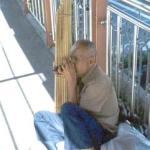 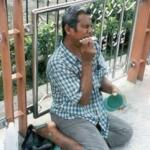 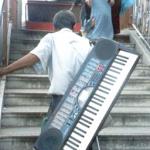 You won't notice it right away. If you are like most pedestrians in Bangkok, you're more concerned with avoiding the ridiculous mishmash of vendors, motorcycles, fruit carts and sleeping dogs that riddle the city footpaths than with listening to the symphony of sounds that surround you. Sure, most of it is nothing but sheer noise - a deafening clatter of revved-up vehicles and whistle-tooting security guards - but not all of it is painful to the ear. Stop, look and yes, listen: there seems to be a melodic tune floating around somewhere above Bangkok's omnipresent layer of carbon monoxide.

No, you're not imagining it; the pleasant sounds you hear are wafting from nearby street musicians. Although they don't qualify as traditional street buskers, the musicians you find strewn about Bangkok's great outdoors are no less committed to plying their craft. At first appearance, these street musicians appear to be no different than the other beggars with whom they share sidewalk space. They aren't exactly dressed for success nor do they look to be in the best of health. But unlike the common variety beggars that camp out on the pavement and obnoxiously shake Big Gulp cups at passing pedestrians, the musical beggars supply a melodic outdoor soundtrack while remaining politely unobtrusive.

First time visitors to Bangkok are usually shocked by the amount of beggars they see camped around the city. Sitting on footbridges or crouched on sidewalks, the beggars are usually missing limbs, blind, handicapped or just plain dirty and pathetic. Desperate looking women clutch half-naked children in one hand and shake cups full of change in the other, as if taunting you to give them some money. Other beggars, worn out by the heat and urban stress, lay sprawled on the pavement, sleeping soundly, as pedestrians carefully step around them. Most of these street beggars, however, aren't the stereotypical homeless wanderers found in western big cities. It's generally acknowledged that Bangkok's legion of beggars, both musically gifted and otherwise, are controlled by a mafia-like syndicate. The mafia assigns the beggars a specific district in which to work and even goes so far as to pick them up and deliver them to their begging grounds each day by van. Whether this explanation is Thai urban legend or not, it's certainly unlikely that just any enterprising soul could go out, pick out a nice street corner spot and start playing for tips. If a foreign musician tried to do so, they would most likely be politely asked to leave or carted away by force.

Whatever the true story is, the presence of the musical beggars certainly adds color and a harmonious touch to the otherwise drab Bangkok cityscape. While the guitar may be the choice of most buskers worldwide, the musical bunch scattered around Bangkok's footpaths and pedestrian bridges opts for more traditionally Thai instruments. The most interesting of the lot is the kaen, a woodwind instrument that resembles a narrow bamboo raft. Dubbed by one writer as "the great granddaddy of the harmonica and the accordion," the kaen is formed by two rows of long bamboo pipes that are staggered in staircase-like fashion. Fitted inside each pipe are special brass reeds, usually made from hand-hammered copper or steel. There are several types of kaen, differing according to height and number of pipes. The number of pipe formations can range from six up to eighteen, though fourteen and sixteen are the most common configurations. Though the kaen is quite popular throughout Thailand, it actually originates from Laos where it was used for performances of Royal Court music hundreds of years ago.

Another popular fixture on the street is the saw. No, this isn't that sharp-toothed tool favored by Canadian lumberjacks, this saw is a fiddle-like stringed instrument that is played with a bow and produces a low, somewhat sad sound. Many of these handmade instruments use a gourd as its base. The klui, which resembles a flute, is also quite common among the street brigade, as are harmonica, tambourine, bongos and every once in a rare while, our old friend the guitar. Still others improvise by beating on the pavement with plastic water bottles or sticks and singing off-key at the top of their lungs (or what's left of their lungs after a day spent in Bangkok's polluted air).

Even more bizarre is the appearance of electric instruments. I'm still not sure how they manage to plug in, but sometimes you will find a whole family of musicians - usually blind ones - set up alongside the road, playing up a storm with keyboards and other instruments, all plugged in to amplifiers that loudly blare their concert. These colorful ensembles resemble hillbilly jug bands; so much so that at least one member always seems to be either asleep or too drunk to function. These bands are also certain to feature a vocalist that can't carry a tune, but that's beside the point. Their mere presence assures passing pedestrians that the streets of Bangkok will remain pulsating with the magical sounds of live music.

Although the number of musical beggars seems to be increasing in Bangkok, don't expect to arrive in town and find them on just any old street corner. Unlike those annoying security guards with whistles (sewn to their lips, perhaps?), the musical beggars are a bit harder to spot. The best places to find them are around shopping centers and popular tourist attractions. Which isn't so surprising: since the beggars play for tips they tend to gravitate to those places where people with money congregate. Usually - weather permitting - you can find beggars playing around Siam Square, World Trade Center, Sukhumvit Road, Silom Road and the area around Victory Monument (a particular goldmine of tuneful activity). Surprisingly, however, you never see law enforcement officers chase them away. This only reinforces the notion that someone's palm is being greased for this activity to be allowed.

The musicians seem oblivious to the scorching heat and visual distractions around them, and play for hours, caught up in the hypnotic joy that one gets from playing an instrument. It can be an entertaining activity just to spend an afternoon walking around and soaking up this special brand of street magic. Mafia or no Mafia, those are good vibes out there.