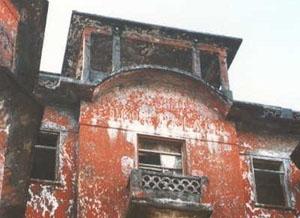 The front entrance of the old Bokor Palace Hotel in the Bokor National Park, Cambodia. 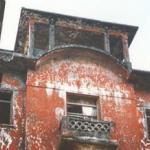 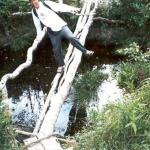 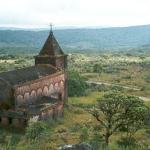 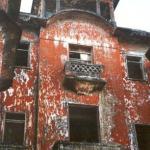 It's late morning on top of Bokor and the clouds are rolling in, ready to encase the craggy mountaintop and tropical rainforest in its daily shroud of mist. Even though it is hot and toasty in nearby Kampot, the temperature on top of the 1,000-meter peak is bordering on being chilly. Where's that parka when you need it?

The arrival of the dark clouds and whistling gusts of wind only adds to the eerie vibe encountered at Bokor Mountain. Up until 1975 Bokor was the site of a resort hotel complex, complete with casino, villas and even a Catholic church. Opened in 1922 by the French community that was headquartered in Phnom Penh, about 200 kilometers to the north, Bokor was quite the posh weekend destination for expats and the wealthy Khmer upper crust.

This swank getaway in the clouds thrived until the mid 1970s when the destructive swathe of the Khmer Rouge came along. The notorious group of soldiers commandeered the resort, using the mountain as an operations base, and Bokor was never the same again. Most buildings on the mountaintop plateau were destroyed, gutted by fire or abandoned. Even after the Khmer Rouge had scattered and fled the scene, the forces of nature continued the destruction, slowly eroding away the once splendid architecture.

At the remains of the Bokor Palace Hotel, a thick coast of rusty fungus-like lichen covers the bullet-pockmarked concrete walls, shards of dirty glass poking out of window frames. Newly arrived visitors are left on their own to wander around the eerily quiet complex.

Inside the hotel, you find a deserted ballroom, a fireplace - used only to hold garbage nowadays - framing one end of the spacious room. Elsewhere, down the narrow corridors of the hotel, broken floor tiles and cracked banisters hint at the opulence that once existed here. The work of renegade graffiti artists, in a variety of languages, decorates the interiors of the rooms. A few kilometers away, on a separate cliff looking out over the sea, lies a private villa that once belonged to King Sihanouk. It, too has been gutted by vandals and now sports an obscene collection of colorful graffiti.

These days Bokor is gradually showing signs of life once again, mainly due to the trickle of curious foreign tourists that come to visit, along with the occasional group of locals that use the area as a picnic spot. From atop the peak, part of the Elephant Mountain range, and just under the lip of gray cloud cover, visitors can gaze at the vast aqua panorama of the Gulf of Thailand.

The sea lies surprisingly close to Bokor, just beyond a steep cliff a few meters from the back door of the old hotel. In the distance is a patchwork of small islands, some belonging to Vietnam. Besides the ghost town-like collection of decaying buildings that are strewn around the peak, Bokor - now a full-fledged national park - provides plenty of natural attractions for visitors to enjoy.

Amidst the thick expanse of forest there are several rapids and waterfalls, the most notable of which is Popokvil Falls. Getting to the falls requires a scenic half-hour walk through rice fields, woods and shallow streams. Once you have passed an area of craggy rocks and shallow rapids, you will literally stumble upon the top of the actual falls. Disappointingly, there is yet no safe vantage point to view the falls from the bottom.

Getting to Bokor, even nowadays, is no easy matter. Although it is located only about 30 kilometers from the heart of Kampot, the narrow gravel road leading to the top of the mountain is in such rough shape that it takes even a sturdy vehicle about two hours to make the ascent. I did the journey both up and down the mountain on the back of a motorcycle and I do believe my posterior and spine will never be the same again.

During the height of rainy season, when the road becomes a treacherous muddy slide, park officials prohibit any vehicle from attempting the trip. For those that don't relish a back-to-back four-hour assault on your spinal cord, and would like to spend more time exploring the park, there is now a guesthouse facility on the mountain with rooms starting at only $5 a night. The downside is that there is no restaurant or any food service in operation.

Entrance fee for foreigners visiting Bokor National Park is 20,000 riel, or five dollars, whichever denomination you happen to have on you. The park opens daily at 6:00 am.