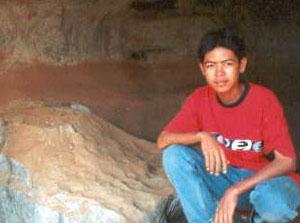 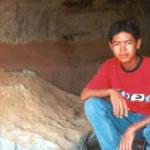 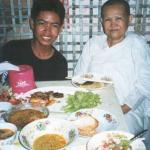 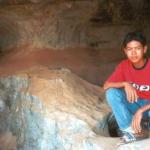 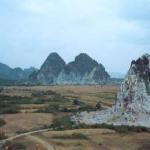 My mid-January arrival in Phnom Penh was greeted by enthusiastic shouts and singing. Fleets of vehicles honked their horns and puttered slowly down the dusty potholed avenues of the city, a celebratory spirit filled the air. Bunches of pretty young maidens stood in the back of flatbed trucks and waved their hands with beauty queen abandon, grinning like it was the happiest day of their life. All this commotion and I had forgotten to shave.

But then again, this greeting wasn't intended for me at all. No, dream as I might, rather than a personal VIP welcome, the loud celebrations in Phnom Penh this day were only the signal for the start of the national communal elections campaign. This was proving to be a big deal since it would be the first time since the Khmer Rouge era of the mid 1970s that an election such as this had been allowed in Cambodia. Throughout the city an endless parade of ugly flatbed trucks rumbled through the streets, the passengers - mostly young women and kids, but could any of them have been actual candidates? - shouting amplified party slogans and waving to whoever paid attention to them. Meanwhile, I had more pressing things to worry about, specifically my upcoming dinner date with the Buddhist nun. What would I wear? How should I act? Would my gift of dried mangoes be appropriate for such an occasion?

The invite had come out of the blue. My regular Phnom Penh newspaper vendor, a teenage boy named Dee, had extended the invitation to have dinner at his home. It was his way of thanking me for paying his language school tuition. I had known Dee for over a year and whenever I dropped into town - which was every three months - I always bought papers from him alone. Even from the first day I met him, I could tell that not only was Dee was a very personable kid, he was sincere about bettering his lot in life. Nevertheless, when he finally broached the subject of taking English classes, I smelled a scam. I had seen what Dee did in his spare time and it usually consisted of playing cards with the moto drivers on the corner. He must have sensed my skepticism, for the next day he personally escorted me down to the school whereupon a friendly young receptionist explained the range of classes offered, showed me the textbook and outlined the payment process. I kept waiting for the bomb to drop, expecting an exorbitant fee or outrageous demand for money. I may be gullible but thanks to my network of oddball friends and colleagues, I've heard all the tall tales ("Our water buffalo is in the hospital and the family needs $500") and hardship stories ("I have to work three jobs to help my family and it costs $200 a month to go to school") so I was prepared for anything. However, no such creative neediness ever surfaced. I was pleasantly surprised when the receptionist said that it would cost only seven dollars a month for Dee to take Monday through Friday classes. As a special "New Year" bonus, you could sign up for three months and get the fourth month free. A full color textbook it would cost an extra four bucks, but only two if you'd settle for a photocopy. What a deal! I went and splurged for the full set including the color textbook. You're obligated now, I told Dee - and no more gambling with those moto drivers on the corner! He smiled sheepishly, promising that his card playing days were over, and that he would diligently study every day.

While I had gotten to know Dee fairly well over the course of a year, I knew almost nothing about his family or where he came from. Before the big night, he briefed me on all the family details. Dee was born in Phnom Penh, the first of two children, but his mother had died when he was only five. His father had run off with another woman shortly afterwards, leaving Dee and a younger brother for his grandmother to raise. After digesting some more background information, I surmised that this grandmother was a Buddhist nun and that an uncle and a younger cousin also lived in the house with him.

While I was somewhat nervous about my appearance before the nun and fearful of making some social faux paux, Dee was beside himself with excitement. He met me at my hotel and we shared a moto back to his apartment building, located only a few blocks from Phnom Penh's huge Central Market. The apartment was an old, small narrow affair, but very clean and tidy. The surroundings were far from plush but neither did they resemble ghetto-like squalor. After introducing me to his Grandmother, cousin (a cute 10-year-old girl named Hian) and a neighbor lady that was helping prepare the meal, Dee meticulously set the table, placing each plate and bowl of food in a carefully selected position. The five of us sat down at the table and started the meal in the absence of the two missing family members. The younger brother was off running wild with friends somewhere ("He's a bad boy sometimes," sighed Dee) and the uncle was at work. The meal itself was pretty much a feast. Even Dee seemed in awe of the incredible spread of steamed crab, shrimp, grilled beef, chicken soup, tomatoes and cucumbers. I attempted to chat with the Grandmother, but with my limited Khmer and her non-existent English, we didn't make too much progress. Thankfully, Dee was there to translate and keep the conversation going.

I had only a few days to spend in Cambodia before I had to be back to work in Bangkok, so I couldn't make my usual trek up to Siem Reap. Instead, I had planned on returning to Kampot, a province about three hours south of Phnom Penh. I had visited Kampot the previous year and was charmed by the magnificent tapestry of rivers, mountains, caves and waterfalls. I had intended on making my return visit alone, but I had noticed Dee pay more than casual interest in my photos of Kampot, so I asked him if he wanted to tag along. After discussing the idea with his grandmother, and getting permission from his boss at the newspaper stand, he eagerly accepted the offer.

While I had not hesitated in inviting Dee along, that didn't mean I was entirely optimistic that the trip would go smoothly. I had never traveled around Cambodia with anyone in tow, much less an 18-year-old newsboy. Would we travel well together, or would having him along cramp my personal style, slow down my pace and generally drive me nuts?

Luckily, all my misgivings turned out to be for naught. Dee proved to be a very compatible and tolerant travel mate, making the trip far more interesting. Perhaps the most gratifying aspect was seeing how much fun he was having. At least it appeared that he was enjoying himself - Dee must have thanked me a dozen times - but more than anything else I got the sense that he was dazzled by the experience. During our two days in the Kampot and Kampong Trach area we explored countless caves and visited waterfalls, rapids, mountains and a zoo - all of which was new to Dee. At the coastal town of Kep we swam in the clean ocean water and ate fresh delicious seafood until our bellies were about to burst. Everywhere we went Dee seemed in awe of the beautiful natural surroundings. He was especially enamored with the caves we explored; the kid seemed a natural born spelunker! Each time, before entering one of the dark cave entrances, Dee would stop and gaze into the darkness, put his hands together and chant some sort of Buddhist prayer.

Back in Phnom Penh, on my last day before leaving, Dee took me to see a soccer match between Vietnam and Cambodia at the Old Stadium. Tons of people were on hand, making the process of buying a ticket and finding a seat - or simply a place to stand - even more chaotic. The whole time I was there, I paid more attention looking out for pickpockets than I did in following the game, which Vietnam won handily.

On the morning of my departure I woke up early, just before six. I had two shots left on the roll of film in my camera, so I decided to take a walk down to the river, a place that is always brimming with some sort of photogenic activity. A comforting breeze was blowing off the river, doing its best to stave off the onset of the day's inevitable onslaught of humidity. After snapping a few photos of the riverfront, I started walking back towards my hotel when I spotted Dee, his head bobbing in a happy-go-lucky rhythm and his left arm clutching a stack of Cambodia Daily newspapers. I checked my watch, only a quarter till seven. I had never realized that Dee started his day so early. Seeing me, he flashed a big grin, waved with his one free hand and walked over to greet me. After a short conversation I fished out some extra money that I had saved for him. He thanked me and reiterated his pledge to study every day.

I wouldn't have blamed Dee if he had slept in that day. Let someone else beat the pavement all day long and try to make a few meager dollars. But no, he wasn't resting. Not content to take the money I had given him and take the day off or shirk his obligations. The kid has gumption. Drive. Dreams. He's one that will make it.