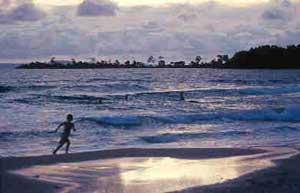 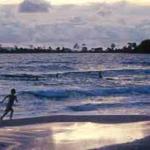 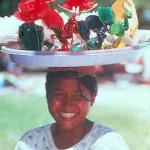 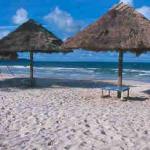 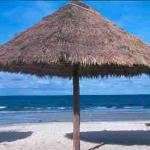 Back in the early nineties, when Ray Zepp in his trailblazing book The Cambodia less travelled suggested that the Cambodian countryside was worthy of exploration, people thought he was crazy. At that time, venturing off the beaten track in Cambodia was a strict no-no. "If the Khmer Rouge don't get you", went the saying, "the landmines surely will".

Thirty years previously (in the 1960s), the sleepy provincial town of Sihanoukville, on Cambodia's south coast, was poised to become the sand-'n-sun capital of South East Asia. Then came the Vietnam War and US bombing raids over Cambodia, and then the final horror - the genocidal reign of Pol Pot. During the Khmer Rouge period, many fine hotels and villas that had sprung up along the beachfronts were razed to the ground.

Today, things are radically different. The roads are safe, and the whole coastline around Sihanoukville is poised to take off like a skyrocket with rabies.

Getting to Sihanoukville is now a breeze, thanks to the efficient, five-times-a-day aircon bus services run by the Malaysian-owned bus company Ho Wah Genting (see Fact File). With Cambodia's new "open skies" policy, direct flights from Singapore and Bangkok to Sihanoukville should soon be a reality.

Sihanoukville's beaches stretch like a string of pearls along the coast to the south-west and south-east of the city, from Victory Beach through to Ochheuteal Beach. The further east you go, the finer the beaches become, with Sokha and Ochheuteal being probably the pick of what is on offer.

Finding a relaxing hotel in Sihanoukville is not so easy, as properties have over the last decade tended to be located in town rather than on the beachfront. But this is rapidly changing, as locals start to "wise up" to what foreigners are looking for.

The top hotels, including the pagoda-style Seaview, front onto Ochheuteal Beach. Further along Ochheuteal some of the most laidback and friendly places in Sihanoukville can be found. Susaday Guest-House sits right opposite the beach, just a minute's walk from the surfline. On a weekday, you can have the whole beach yourself, undisturbed by the young snack-sellers who back towards the town are peskier than sand-flies. A block back from the beach, the Orchidée Guest-House is set in lush orchid gardens.

Dang Seng came to Sihanoukville from Battembang (Cambodia's second city) in 1982. His wife and daughter had been killed by the Khmer Rouge, and he wanted to start a new life. As a teacher of French, he bemoans the fact that all the young people today are learning English or Thai instead. "It's sad", he says. "The French way of life is part of our culture, yet our kids get carried away by American dreams".

For Dang Seng and many others, a popular Francophone hangout in Sihanoukville is Les Feuilles, a boule's throw from the beach at Ochheuteal. Géralde and his Khmer wife Tschantal have created a home-away-from-home not only for homesick French but also for hordes of other visitors who come to enjoy fine food, good cold Angkor beer and great music. Les Feuilles also has rooms to let, at French minimalist prices.

At the entrance to town stands the Catholic Church of St Michael, a simple but elegant concrete structure. Father René, now in his 80s, has been priest here for nearly fifty years, weathering the murderous Pol Pot era. During that time the church was used as a prison and later as a storehouse, before re-opening in 1993. Today, the original paintings (mainly crucifixion scenes depicting the principal characters in Khmer costume) line the church walls.

Victory Beach, near Sihanoukville Port, is far from the best of Sihanoukville's beaches - but it's where all the action is happening. Across from the Beach, the huge Holiday Palace Casino Hotel offers blackjack, roulette and baccarat (plus the ubiquitous slots), 24 hours a day. Right next door, an equally large hotel is under construction. But the beachfront itself is as bucolic as in a silk-screen painting, set in landscaped gardens with a shrine to the Lady Buddha set under a superb banyan tree.

Weather Station Hill, behind Victory Beach, is where the backpackers hang out in Third World conditions (or maybe Fourth World) - but then, have you ever heard people describe themselves as "Second World"?) At the Melting Pot Guest House, Serena from Ireland describes how, by saving five dollars a day on accommodation, she can prolong her stay here by three weeks. If duration of stay could be translated to quality of experience, this could be a fair comment.

One popular mixing place on Weather Tree Hill is Chuck's Place, a delightfully tumbledown wooden shack featuring CNN and huge fish meals. Chuck's is where a lot of the expat bar owners hang out - including Lenny and Siobhan from Scotland, who own the new Bedrock Café (a great spot from which to watch the sunset) just down the road.

Getting around Sihanoukville and its environs is relatively easy, thanks to the ubiquitous "motodops", pillion motor-cycles offering highly negotiable fares. You can even take a motodop out of town - or better still hire your own motorcycle. One suggested trip is to the Ream National Park, a 21,000 hectare sanctuary of wetlands, undiscovered beaches and mangrove-fringed rivers. Out of the rain paddies encircling the Park, forested limestone cliffs soar like petrified dragons, while within the Park boundaries you can take riverboat trips by arrangement with Park headquaters.

The whole of the Sihanoukville region is worthy of prolonged exploration. The Kbal Chhay waterfalls are just a short trip out of town, and the old French colonial town of Kampot is about an hour away via a very scenic ocean road. Just one thing - save plenty of time for relaxing on the beach!

Highly recommended is the Susaday Guest-House, on Ochheuteal Beach (tel +855 34 320156). Good bar and restaurant, however, the rooms are fairly small, with fan and cold water only. $US10 a night.

Another top establishment (a little way from Long Beach, between Sokha and Ochheuteal beaches), is the brand new Golden Castle Casino and Hotel (tel +855 34 933919, fax 933918), already up-and-running but due to officially open in August 2000.

Also, try the excellent French-Khmer food (including the house specialty Lac-loc) at Les Feuilles (+855 34 320 156), a block from Ochheuteal Beach).

The usually excellent Lonely Planet and Passport series are sadly lacking on this occasion. Both publishers issued a new Cambodia guide in early 2000, but in each case the Sihanoukville information is woefully inaccurate. The only decent guide is the free Sihanoukville Visitors' Guide, available at the Ho Wah Genting bus station in Phnom Penh and widely distributed in Sihanoukville. The Guide can also be found online at: http://www.canbypublications.com