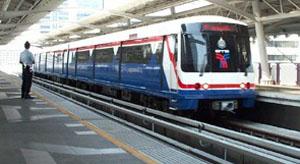 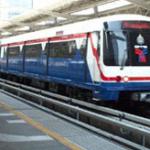 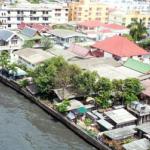 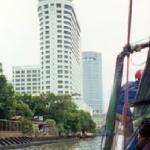 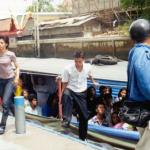 The first thing that most newcomers to Bangkok notice about the city - other than the poor quality of the air - is the traffic. Nasty bumper-to-bumper mayhem spreads its tentacles across the city and holds commuters captive virtually around the clock. There seems to be no escape from the terminal gridlock and the ensuing toxic fumes.

The tuk-tuk, in case you haven't had the 'pleasure' of riding in one, is an odd three-wheeled contraption that closely resembles a flatulent golf cart on amphetamines. Most tourists fawn over how cute they are, snap a few photos and eagerly climb in, anxious to take a ride in the unique vehicle. After that initial transport experience, most vow never to do it again. Tuk-tuks are tolerable for short journeys but for distances of more than two blocks they can be quite annoying. Once a tuk-tuk gets stuck in traffic - which is often - their open-air design (that's right, no doors or windows!) leaves passengers vulnerable to exhaust fumes, deafening noises and the sweltering Bangkok heat. Unlike most of the city's taxicabs, tuk-tuks don't have a meter so you have to negotiate the fare before your adventure begins or risk being overcharged by some glue-sniffing hillbilly that just learned how to drive last week.

For those people that can afford its relatively steep fares, the new BTS (Bangkok Transport System) Skytrain is a fabulous way to get around the congested city. For frustrated commuters it has certainly been a godsend. Trips across town that used to take an hour or more can now be completed in mere minutes. The Skytrain's biggest handicap is that it covers a fairly limited route. It doesn't extend into the suburbs nor does it go to the airport or the popular Grand Palace area. Still, where it does take you, it gets you there quickly and in air-conditioned comfort. As lovely as it is, though, the Skytrain is not without its handicaps. If you're changing trains, particularly at the busy Siam station, prepare to do battle with hordes of teenagers and aggressive women toting shopping bags and cell phones. They will blatantly cut the line and charge past you, intent on claiming the first available seat. Getting to the train itself is also bit on an ordeal. Even though BTS has finally installed escalators at all the stations, those pleasant people movers are found at only one of the several street entrances, leaving most commuters the tiring task of climbing the equivalent of four flights of stairs to reach their train. You want a good workout? Forget the gym and take the Skytrain!

Boat travel on the klong, however, is not everyone's idea of a great experience. The biggest complaint is the nasty water itself. To put it bluntly: it stinks. Getting some of that toxic liquid splashed on you first thing in the morning is not the ideal way to start your day. Taking a dip in the klong would be akin to bathing in battery acid. Many passengers carry a newspaper with them and hold it over their face to ward off errant splashes until safely on dry land. The boats are also very loud and the closer you sit (or stand, in the case of a packed vessel) to the engine, the more deafening it gets. Earplugs? Yes! Safety is also a major concern. Getting on and off the boat can be tricky, especially for those with physical handicaps or that aren't very agile. Like the city buses, the boats don't always come to a full stop before allowing passengers to disembark. Sometimes, and only sometimes, will the boat stop at the pier (usually this only occurs when attractive young females are disembarking) to allow passengers to board or get off. Normally the boats slow down just enough for you to climb out onto a narrow wooden deck - feels a bit like walking the plank - and grab a thick dirty rope (that runs the length of the boat) before determining when it's safe to jump. No, safety is not a pressing concern. Seeing people slip and fall in the black, murky water is not an uncommon sight.