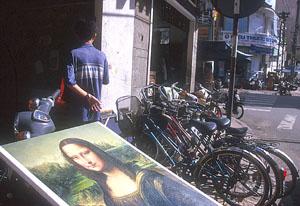 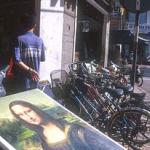 The smirking canvas of the Mona Lisa rides pillion on Tran Minh Tam's motorcycle, as he roars through the streets of Ho Chi Minh city. It's strapped on with a rough elastic cord, and in the dust and fumes of Vietnam's capital city, isn't even wrapped in plastic.

Tran manoeuvres his way through the transportation melee as if by instinct. He narrowly misses an old man selling cigarettes, and avoids the balloon seller whose wares float like grossly stuffed toys above the crush of cyclos, bright red taxis and tangle of a million bicycles. He scoots past the glorious architectural relics of French occupation, past contemporary shops in ancient buildings, past restaurants occupied by beer drinking tourists until he screeches to a stop in the gutter outside his own shop in the 1st district.

Mona Lisa is yanked off the pillion, and given to Tran's assistant who quickly wraps it up in brown paper. The waiting American tourist hands over the cash, and Mona Lisa disappears into the streets of Ho Chi Minh city, her international destination unknown.

Tran smiles. He's happy. It's been a busy day. Earlier he'd given rides to a Matisse, a Dali and a Gaugin. He doesn't mind losing the Mona Lisa - there are plenty more where she came from. For stacked up against the walls of Tran's small shop are canvasses of Rembrandt, Kahlo, Modigliani, Picasso, Botero, Renoir, da Vinci; classic dense rich oils of the 15th century, images of religious and abstract, cubist, surrealist and impressionist movements. You don't need to suffer the queues at the Louvre - in Tran's shop is every painting you'll ever wish to see.

And if Tran doesn't have that particular Bonnard you're after, he'll have it for you in a fortnight. All he has to do is give a small photograph of your heart's desire to one of his painters, and in the time it takes for the oil to dry, your painting will be hanging on your wall at home. You won't get the original, but the works are so close to the real thing that the untrained eye would scarcely know the difference.

Tran isn't a thief, or a forger. He, and the forty artists who work for him at any one time, who labour twelve hours a day on small stools in front of stretched canvasses, are master copiers.

Many would say that what they are doing is not art. Tran disagrees. He believes copying works of famous painters is an excellent way to learn about line, form and colour, and his team do this for four years. He says it's more difficult to paint an exact copy than the original, for there is no room for error. In order to be an artist, Tran insists, one must first be a technician. Besides, copies of famous works sell more quickly than Vietnamese originals.

Formal art education is not a prerequisite. One painter, busy with a Fernando Botero, was a signwriter who used to work across the street. Now instead of a spraygun and a stencil, he works with some precious brushes, a tiny photograph and a palette of vivid colours. Ho Chi Minh city is a giant pavement artgallery. Years of repression and trauma have not dimmed the talent of the Vietnamese, neither has it lessened their patience for crafts that have been handed down for generations.

Besides the bright canvasses hanging in profusion in the small shops that line the side streets, where barefoot cyclo riders sleep off the heat of the day under leafy trees, there are women creating their own artform in needlework so minute it is executed with the dexterity of a brain surgeon. Lacquerware, obviously made for the Western tourist market, gleams like treasure in their Aladdin's cave shops. Mother of pearl chopsticks and boxes, tortoiseshell combs, silk paintings, marble and bone carvings, bamboo and wickerware, celadon pottery, jade, silk, wool and brocade are all available at bargain prices.

Ho Chi Minh City - Saigon - was built on the site of an ancient Khmer city. It was a thinly populated area of forests, swamps and lakes until the 17th century, but by the 18th century it had become an important trading centre that continued to prosper despite constant fighting between the Vietnamese and Cambodians.

After French and Spanish ships penetrated Saigon in 1859, the French conquered the country, and Saigon became the capital of the French colony of Cochinchina. Modernisation followed colonisation. The ancient canals were filled, the marshlands drained, roads were built, streets and quarters were laid out and many trees were planted. The city quickly developed the character of a French provincial town.

Saigon was renamed Ho Chi Minh city when it fell to the communists in 1975,but its 4 1/2 million inhabitants still call it Saigon. Most of those inhabitants ride bicycles and motorcycles, as cars are expensive and getting a licence means months of study.

Crossing the street is a nerve rattling experience. Go with the flow has more meaning here than anywhere else: it seems the easiest way to avoid getting run down by the hoardes of cyclos, motorbikes, trucks, buses, taxis, scooters is to walk straight into the melee and the traffic will part, although it's the pedestrian's responsibility to avoid getting knocked down, not the drivers.

As fast as the French and later the Americans were establishing their Western culture, the Vietnamese were retaliating with their pagodas, shrines, intricately carved houses, Buddhist, Indian and Chinese temples. The streets are awash with enterprising vendors peddling everything from vegetables to incense and second hand watches, from footwear to artificial flowers and face masks to protect the lungs from fumes, from spare bicycle parts to small quantities of petrol. Barbers wield the old strap and razor, close enough to the road's edge to get a close shave from a car, and the waft of spices and cooking is ever present.

Vendors stand around the gardens of the Town Hall, under the looming shadow of Ho Chi Minh, selling balloons, while cyclo drivers tout for sightseeing trips to point out the sights of the city. A drink on the roof garden of the adjacent stately Rex Hotel will blow a hole in anyone's budget, but the architecture of Saigon's icon is worth experiencing. The contemporary Caravelle Hotel has a trendy rooftop bar with good music and great views to the city.

Cholon (Big Market), in the 5th district, is Saigon's Chinatown. Half a million people live here, spilling with every conceivable kind of ware onto the streets which are jampacked with noisy activity. The Ben Thanh Market, established in 1914, is where you can get a pedicure while eating a bowl of noodle soup, buy a frog for the soup pot, some pigs ears for a special occasion or transistor radios, refrigerators, televisions, spices, dried seafood, lotus flowers and unusual blends of tea.

Every back street tells its own tale. Just wander into Tran's, or any other shop, and the history of the world will unravel.