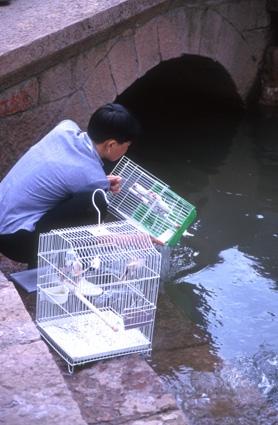 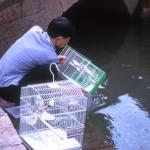 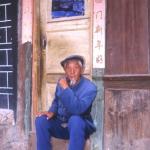 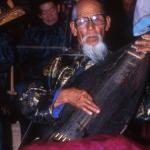 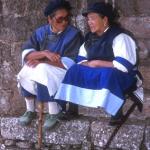 Chinese of all ages and stature are coming from the cobbled, ancient Chinese village of Dayan, to hear a handful of musicians so old they walked across Mongolia before most of us were born. They're coming again to hang over the rafters of the little wooden musical hall in Mishi Lane, to be enraptured by this music of the gods in a place where there is serenity, eternal peace and harmony.

They're coming to listen to instruments that were hidden during the hated Cultural Revolution, played by the musicians taught by the descendents of those who learned under the patronage of Kublai Kahn in the 13th century.

Dayan is over 800 years old.  It's in the precinct of Lijiang, known as the pearl in China's Yunnan province. It's a largely Naxi settlement built during the Southern Song Dynasty eight centuries ago. In 1986, the State Council designated Dayan as a famous ancient historical and cultural city of national calibre. In 1997, the UNESCO put Lijiang on a list of the world's major cultural heritages.

In the shadow of the awesome Jade Dragon Snow Mountain and close to Tiger Leaping Gorge, Lijiang is thankfully not yet the domain of tourists and souvenir seekers. Regarded by scholars and occasional visitors as the Shangri-La dreamed of in fable and myth, Lijiang is unchanged from when it was first established all those centuries ago.

Lijiang is a gathering place of rugged mountain people from various ethnic groups - the Lisu, Pumi and Nuosu Yi, but most are the Naxi who believe they came from Tabu, a common ancestor who helped them hatch from magic eggs. Their creation myth is depicted pictorially in booklets made of resilient, insect-proof bark dating from the 10th century.   Dongbas or shamans were the only people who could read and write the unique Naxi picture scripts but as the centuries passed, the dongbas vanished.  Now scholars the world over are attempting to preserve their wisdom and lore.

Sifang Street is the town's core, from which a labyrinth of flagged streets and alleyways branch out and crisscross in all directions.  Numerous limpid streams, arising from Black Dragon Pool, divide the ancient city into several sections, which are linked by many plain wooden bridges and buildings that cross these streams, making it "a city upon the water". Dayan still retains its original layout and traditional architectural style of brick and tile dwellings with carved doors and painted windows.

Time in Dayan has a different value. It is a gentle friend and a trusted teacher, a place where elders are revered and the young respected.  Time is always too short, spent as it is in quiet communication.  There is always time to look up at a flight of cranes or admire some sculptured clouds.

Across bridges and under eaves so antiquated they allowed the passage of the Imperial troops of the Yuan Dynasty in the thirteenth century, the men, women and children have come to hear the music.  They are flatfooted and slippered and dressed in the traditional blue and black pajamas of Imperial China.

They pass a woman squatting on ancient cobbles who dunks her two birdcages in the water, washing them in the ways of her ancestors. Gathering a friend here or a grandmother there, they pass through the village square of Sifang Street, crowded with a hundred stalls where traders noisily exchange exquisite Ming porcelain for the thrill of enough money to buy a plastic bucket imported from the West.

They nod in greeting to the young man down a side alley, a bandanna emblazoned with an anti cultural revolution slogan on his forehead, who spends his days blistering his fingers as he carves Chinese symbols into a stick of jade to be used as a signature stamp on artwork and calligraphy.

They ask politely of a young boy's health, and offer their services to an older person in need. Some interrupt their bargaining to admire a clump of roses or peer for a minute into the clear depths of a stream. They pass the restaurants that spill onto wooden decks where dirty dishes are dipped into the fast running water beneath them to be washed, where people upstream cleansed and abluted themselves earlier in the day.  Inside, where entire extended families gather for the evening meal, the habit of spitting pre-chewed food to the floor is in full swing.

Exchanging pleasantries with the calligrapher, the stone mason, the wood carver and the scribe, the philosopher and the medicine man, the villagers make the traditional Chinese greeting - "have you eaten yet?" much as they have done for the last 800 years.

In this ancient scholarly city of poets, painters and writers, it is the unique Naxi music that calls people from all domestic corners. Zealously transmitted from father to son, this musical tradition was one of the most cherished among the Naxi. Amongst the well-to-do, knowledge of this ancient music was the mark of a real gentleman, in much the same way as being a fully-fledged Chinese scholar was.

The music and its tradition have not changed for almost eight centuries, in spite of the Cultural Revolution.  Since its demise the instruments, and the musicians, have come out of hiding. Every night, in the wooden, ancient auditorium, the musicians gather, with some young, sweet-faced musical prodigies, to let the rafters ring with twenty two of the original compositions that remain in their collective memory.  Gathering too, are the locals, who fill the rafters to bursting, who hang eagerly onto every note, every musical nuance, every uptake of an ancient bow.

The old instruments are thrilling to see:  a weathered, transverse flute, a copper gong-frame, Chinese lutes, three-stringed 'banjos', enormous cymbals, a wooden fish-shaped drum.  Perched on a flower decorated podium under the austere portrait gazes of other musicians, and dressed in the splendor of black, gold and red silken robes, the musicians pluck and blow and strum and bow tunes that wail of the indignities of the last centuries.

The Water Dragon is Singing, Ten Gifts from God, Wind from the River, Song of the Bound Feet, The Sheep on the Hill: these melodies transport the listener to an era long forgotten.  The vocal notes are high and sharp, like water trickling over stones; the instruments imply women weeping or trees bending under the weight of snow.  When the gong is struck, the whole house seems to vibrate with its velvety waves.

The audience is spellbound.  The musicians stand for their accolades and enthusiastic applause. Their collective age would total a millennium.  Some need to be helped up, others must be nudged awake.  Most stare out to the audience through eyes that have seen more in a lifetime than anyone can comprehend.

The show is over.  The crowd shuffles out, into the dark, kerosene lit alleys, to walk again the cobbles and the bridges of a town older than the history books.

As their feet ring across the stones, and the water splashes through sluices and canals, as the people chatter and the hammers crack, Lijiang's own music plays on, as it has done for centuries.

May the world stay forever out.