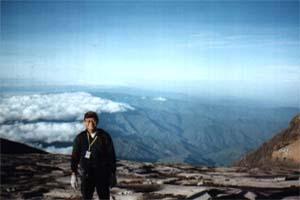 On Top of The World on Mount Kinabalu. 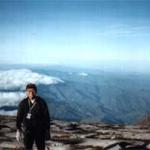 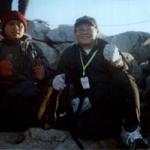 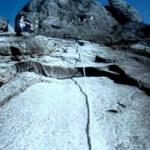 The mountain is one of the easiest to conquer as there are a number of fairly well-marked trails all the way to the summit. The tamest trail is the Summit Trail, also known as the South Ridge Route which is the standard climbing route. One does not need to attain the fitness level of a triathlon athlete to successfully climb up the summit. However it is not a cake-walk either. What is needed is a reasonable level of fitness, mental discipline and physical endurance by regular brisk walking or jogging. Walking up flights of steps with a back-pack containing a few kilograms of load would further strengthened one's leg muscles and improve stamina. No special equipment is required apart from a sturdy pair of walking/hiking shoes with good treads. Do bring along "Deep Heat" ointment in case of muscular cramps and headache and diarrhea pills. To escape hunger pangs it is advisable to bring along high energy foodstuffs such as muesli and chocolate bars and hard-boiled eggs.

The Summit Trail measures a distance of 8.85 kilometers (5.5 miles). The starting point of the climb is at Timpohon Gate (1866 meters/6122 feet), located 5.5 kilometers (3 miles) from the Park Headquarters entrance. The Summit climb usually takes two days. Most climbers register at the Park Headquarters in the morning and many of them (except those from Kota Kinabalu or nearby) would have stayed the night before at the Park Headquarters. Most climbers after the first day's trek would put up for the night at Panar Laban (3270 meters/10728 feet) staying either at the 54-bed Laban Rata Resthouse equipped with heating, hot water shower and a restaurant or the 12-bed Waras and Panar Laban huts or the 44-bed Gunting Lagadan hut. Between the starting point and Panar Laban there are six rest areas or shelters (pondok in local parlance).

At each pondok there are toilet facilities and a water tank with piped drinking water which however are not chlorinated. The average time taken to reach Panar Laban is about four and a half to five and a half hours although photographers, botanists, birdwatchers would be expected to take a bit longer. Because of the rarified atmosphere the trick to overcome breathing problems, dizziness, nausea or headache is to make the ascent gradually so that one would be better acclimatized to the lack of oxygen.

The trail to Panar Laban is interesting in view that one would traverse through the different vegetation zones and enjoy a cacophony of sounds of the wild from the chirping of crickets, screeching of insects and whooping of the geckos. Besides, one would be dazzled by the colorful flowers and the rich diversity of plants. A greater part of the trail comprise a well trodden path strewn with peddles and boulders. Where the gradient is a bit steep steps would be cut from the ground and strips of planks would be anchored to the ledges. Where the gradient is even steeper there would be handrails and wooden steps built along the trail.

Most climbers should arrive at Panar Laban by 6.00pm by which time dusk would take over and it would be quite misty and chilly in that part of Mount Kinabalu. Climbers are advised at take a rest after dinner and to wake up just after midnight for a light meal before making the final 3-kilometer (1.9 mile) assault to the summit starting from about 3.00am. The first quarter journey is rather arduous as the gradient is steep. At certain stretches one would have to climb up long ladder-like structures (cum with handrails) resting against the escarpment. The next quarter part of the trek involved ascending up the crest of the mountain. As this stretch is above the tree line climbers would have to cling onto the fixed ropes when making the ascent.

Finally the last half of the journey entailed trekking up the gradually inclined plateau along a trail with a smooth granite surface. The upper summit area is both heavily cairned and strung with ropes to guide climbers so that they would not loose their way during foul weather or when the mists envelope the air. Under such daunting circumstances it is important for climbers to keep close to the guide ropes and cairn markers. In August 2001, two British teenage siblings strayed away from their parents on their way down the summit and they lost their way. The boy was soon found but Ellie James' body was found five days later. She was believed to have died from hypothermia and hunger.

Just after the break of dawn, I reached the crest of the summit zone after a leisurely three-hour walk from the resthouse. To reach Low's Peak one would have to gingerly clamber up a steep 20 meter (66 feet)-high peak made up at least on the surface of loose rocks and boulders. Standing on Low's Peak gave me a top-of-the world feeling. I felt a sense of achievement running through my spines. In quiet solitude I spent half an hour at the peak to marvel at the sun emerging from the darkness. On the way down I gazed in wonderment at the beautifully sculptured peaks bathed by the brilliant sunlight. Not even Michelangelo could do a better job than Mother Nature. By 3.00pm I found myself relaxing at the Park Headquarters after much punishing of my knees as I bumped down the trail. The homage paid to the majestic mountain was, to me, an awesome and exhilarating experience.

For proper appreciation of the Park it is essential to spend one or two nights there. A variety of comfortable and clean accommodation is available at the Park Headquarters as follows:-

The cheapest places are the 46-bed Medang Hotel and 54-bed Menggilan Hostel. A dormitory-styled bed costs Ringgit 12 (USUSD3.16) per person. The priciest accommodation costs Ringgit 1150 (USD302.63) per night for 10 persons for the Rajah Lodge.

There are two restaurants, the Kinabalu Balsam which offer basic but decent dishes at reasonable prices and the Liwagu Restaurant which is slightly more expensive.

One can never feel bored in Kinabalu Park as there are a variety of activities to take part. They include:-

Nine trails radiate from the Park Headquarters of which 7 are ridgetop trails and 2 are streamside trails. They all take less than half a day to complete. It is worth a visit to the Mountain Garden a showcase of the myriad plants of Kinabalu. Situated at the Park headquarters it is a repository of Kinabalu plants grown in a natural environment. The Park is frequented by bird watchers from all over the world. They can be easily be identified as they invariably would have a pair of binoculars slung on their neck and holding a notebook with pen in hand and with B.E. Smythies' "The Birds of Borneo" or G.W.H. Davison's "The Birds of Mount Kinabalu" clutched beneath their armpits. Since 1987 the Mount Kinabalu International Climbathon has been an annual event in September/October. Visitors would be amazed by the feats of the strongest runners who could run up to the summit and return to the Park Headquarters in a mere 2 hours and 41 minutes and taking a grueling 21-kilometer (13-mile) route.

Kinabalu Park is one of the few places in the world which is so easily accessible. It only takes less than two hours to reach the Park Headquarters with tarred roads all the way from the city of Kota Kinabalu or its international airport. Here one can experience the rich diversity of flora and fauna in a pristine and undisturbed natural environment. Kinabalu Park truly deserves the recognition given by UNESCO which accorded it the status as a natural World Heritage Site. It is a priceless gift to Man for today and the future.

The Birds of Borneo by B.E. Smythies.

The Birds of Mount Kinabalu by G.W.H. Davison.