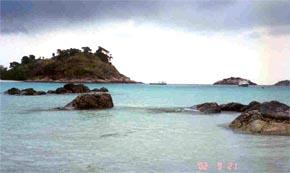 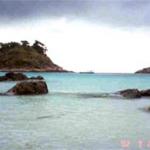 'Yes, I love it. The sea is everything. It covers seven-tenths of the terrestrial globe.Its breath is pure and healthy. It is an immense dessert where man is never alone for he feels life, quivering around him on every side..
Ah, sir, live in the bosom of the waters! There alone is independence.There I recognize no masters! There I am free.' - Jules Verne

The threat of pollution, tourism, over-fishing and global warming is the major threat for our islands and its diverse marine life. On 21st September every year, PADI has been practicing its International Cleanup Day to protect and preserve the islands environment for a sustainable future and freedom...

A.B with his avid smile greeted us as soon as we walked down the small pier of Redang Kalong Resort. The dive master friendly smile gave me a tinge of immediate belonging among the unknown faces of volunteers for the 17th Annual International Cleanup Day. Total strangers converged, with only one mission to accomplish. Beach goers, scuba divers and water lover of all ages sign up to do their part to combat one of the aquatic environment most pervasive problem: the debris. A reason, simple enough to lure me there.

Redang Island, located at 45km offshore of Terengganu is reachable via speedboat in a half hour from the Kuala Terengganu jetty. Its archipelago comprises of 9 islands, the Lima Island, Paku Besar Island, Paku Kecil Island, Kerrengga Besar Island, Kerengga Kecil Island, Ekor Tebu Island, Ling Island, Pinang Island and Redang Island. Among the attractions at the twenty over diving spots are the Mini Mount situated between Kerengga Besar Island and Kerengga Kecil Island, and the shipwrecks at the vicinity of Pinang Island where the H.M.S Prince of Wales and H.M.S Repulse were sunk during the World War II.

Redang Island has since been moving slowly towards a commercialized island with the existence of a number of resorts built meant for holiday seekers searching for a paradise escape. Beautiful and delicate as she is with her surrounding turquoise water bordering her white powdery sand, she can't twist away from the dreadful debris harm whether on land or underwater. The number of human debris collected - E.g: beverage containers, glass pieces, wrappers, plastic bottles and ropes were a sore to any human eyes. The worst offender of the aquatic debris I found out was smoker! Hundreds of cigarette butts were collected according to our compiled data at the end of the cleanup along the Redang Kalong Beach.

Soon the time came for the buoyancy performance dive, meters away from the beach, to check on our skills for the underwater cleanup the day after. Some divers have logged more than 100 dives while some as few as four dives. Number four was pretty good for me, the exact number of dives that I've logged since my last dive in Tioman Island, off Mersing. A mix emotion of excitement, thrill and yet nervous engulfed me as I tried my best to remember how to install myself with the diving gadgets! It doesn't help much with the cameraman shooting our stunts underwater - dragging the hula-hoop with our oxygen tanks rather than dive through it. It was hilarious to watch in the big screen at night, as A.B pointed out our mistakes in between his chuckles.

The next day promised 2 more dives, a leisure dive at Lima Island and checking out the dive site we will be cleaning. Lima Island is on the northern end of the island, beautified by its prolific coral shelf that slopes gently to a depth of 24 meters. Many species of Indo Pacific tropical fish and invertebrate presented this place with grace. Residents here include parrot fish, puffers and anemone fish in many varieties which happened to be my personal favourite glances. Cute and tiny they are, hiding in between the soft swinging anemone as if they were inviting me for a hide and seek game. Colorful nudibranches forage the reef there, completing a happy underwater family.

The sea becomes choppy when we checked out the fishing net that got tangled on the corals, challenging our buoyancy skill. Mother nature wins in all game I learnt when A.B called it off 15 minutes later before we start banging and scraping off the corals instead.

Fueled and geared up for the underwater cleanup on 21st Sept, we dived in as a team to cut the net strangling the corals and passed it to the snorkellers at the surface. Divers with better buoyancy control cut the net gently to avoid destroying the delicate corals while the rest help to toss it inside the net. It was all so exciting! The end result was rewarding - a clean breathing corals. How proud I was to be part of the enthusiastic team. I had somehow done my bit with total pleasure.

With a wide grin the next day, A.B gave us a reward as a token of appreciation for our fruitful effort. Not a reward of cash or a reward of any material elements, but a reward of admiring the heaven of the underwater realm. A leisure dive, at the Garden of Eden! Otherwise known as the Black Coral Garden filled with Antipathes sp, corals or more commonly referred to as black corals. Interesting sights of white sea fans (looking much like a white Christmas tree), sea whips, sponges, blue-eye moray eel and a kaleidoscope of fish seems surreal before my eyes.