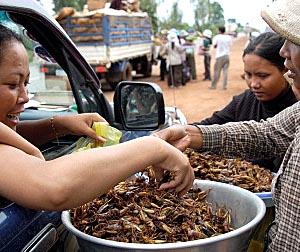 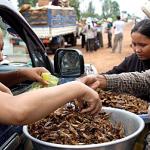 But this year, huge numbers of Cambodians in central Kampong Thom province have jumped in on the business as demand has spiked, leading to innovative ways of catching the critters and sparking interest from the agricultural ministry.

Roadside at the village of Thun Mong, 40-year-old Soun Sang smokes a cigarette in the violet light cast by some of his lamps, awaiting the night's haul with some trepidation as an unusual drizzle sets in. "Some nights only a few come, so it's really not reliable. But when there are a lot, there might be 3,000 kilograms (6,600 pounds) collected in this area," he says, gesturing to the horizon, where blue lights zig zag as far as the eye can see.

Like many in this village, Soun Sang started catching crickets this year when he noticed his neighbours setting up newfangled traps and doing well. They earn 2,000 to 5,000 riel (50 cents to 1.25 dollars) per kilogram.

The traps devised only a season or two ago consist of a rectangular bamboo frame hung with a sheet of plastic, topped by a blue fluorescent tube to attrack the insects powered by a car battery or diesel generator. A pond is dug to catch the crickets after they hit the plastic and hurtle to the ground.

They seem simple but still cost about 170,000 riel to put together, a serious investment in impoverished Cambodia, where more than a third of the population gets by on under a dollar a day.

Soun Sang recalls how he began eating crickets in desperation during the 1975-79 ultra-Maoist Khmer Rouge regime, which oversaw the deaths of up to two million Cambodians, many from starvation.

"We started eating them during Pol Pot's regime, but back then we caught the crickets by digging holes. We didn't have these lamps," he says.

"We had to play hide and seek (to avoid capture and punishment) and at that time we toasted them over a fire. Now we can fry them up in oil and they have a better taste. And now I'm not worried at all about being caught."

The former medical officer, who treated government soldiers fighting Khmer Rouge guerillas in the 1980s as the conflict rumbled on, lost an arm and several fingers when he stepped on a landmine in 1988.

"If the crickets come, I can make a really good profit. Some nights I collect up to 30 kilograms," the father-of-two says.

Study to see if population declining

While the crickets have come for years, Soun Sang says middlemen seeking to buy them turned up only recently. He grumbles that they have the edge, with mobile phones to call each other and estimate the night's haul before setting a price.

"We don't have telephones so sometimes they cheat us and say a lot came elsewhere so we don't get a good price," he complains. A few kilometres away, middleman and catcher Nong Sovann has 42 lamps ringing his rice paddies like sapphire necklaces. This is his second year in the business and he says demand is skyrocketing.

"This year is much better than last year," he says, estimating that he netted a tonne a day last month. "If we collect a tonne, then we go to the Thai border."

At Arunras Restaurant -- considered the best in Kampong Thom city -- manager Nari, who declines to give her surname, demonstrates how to consume them, selecting from a tray of crickets fried with green onions, garlic and salt.

She sells about 20 kilograms a day but first offered the insects, until recently seen as unsophisticated street food in Cambodia, only a month ago as her customers started demanding them.

The 45-year-old's ruby-polished nails pluck a dewinged and gutted carcass off the pile and she snaps off and discards two thick hind legs before biting into the head with a crunch. A plate of about 50 costs 5,000 riel.

"People eat them with beer or just about anything at all. This morning someone ordered them for the first time with rice on the side," she says, popping the rest of the insect into her lipsticked mouth.

Ou Bossphoan, director of the provincial department of agriculture, takes the upsurge in demand seriously, and says the seasons seem to run roughly from May to July and December to January but are not fully predictable.

"People need extra income and this provides Kampong Thom people with a new income," he says in his office, a stone's throw from the market where sellers are now offloading last night's disappointing haul. "Our experts are going to study whether this mass catching will affect the numbers" of crickets in the wild, he says.

He says that generators to power large numbers of lamps have been used for the first time this year and that the ministry of agriculture has asked his department to investigate the source of the crickets. Even farming is an idea being tossed around, but he fears the market prefers "wild" crickets.

Numbers are difficult to estimate, but Ou Bossphoan believes about half of the insects not eaten in Kampong Thom end up in Phnom Penh, half in Thailand.

The crickets also flock to neighbouring Kampong Cham and Siem Reap provinces, but in smaller numbers, and people say the Kampong Thom crickets are the most delicious, he claims.

And the senior official confirms the cricket obsession is going upmarket.

"Our officials here in the past were not interested in crickets but this year, we are eating a lot. When I go to a restaurant, I too order crickets."