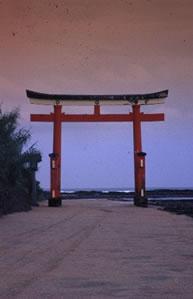 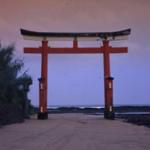 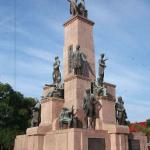 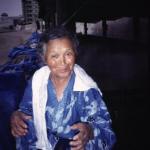 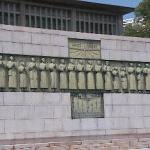 It's Japan's southernmost main island, the "Hawaii" of the country. Cruising Kyushu takes you way off the beaten track, away from the tourist crowds of Nara and Kyoto, and to a place that the Japanese themselves regard as relaxed and laid-back.

Kyushu is also the most "Westernised" of Japan's islands, if such a thing be possible. From the early 16th Century, the port of Nagasaki in western Kysushu was Japan's sole link to the outside world, during a period of more than 260 years of official national isolation under the Edo dynasty.

Our exploration of Kyushu starts on Sakurajima Island, just offshore from Kagoshima City in the "deep south" of the island. I didn't get erupted upon while on Sakurajima Island. Maybe this is because it was a Sunday, or maybe the goddess Tsukiyomi was in a benevolent mood.

Sakurajima Island is home to one of the world's most active volcanic peaks, Minami-Dake, connected by a low saddle to two other still higher peaks. Minami-Dake most recently erupted in 1986, and still almost daily spews forth ash, or at the very least copious quantities of smoke and steam.

Sakurajima Island can be reached by ferry from Kagoshima, just 10 minutes and ¥150. Provided you don't get covered in lava during the trip, you can just relax and enjoy the fine views of the volcano, with its bamboo-swathed fore-hills. From Sakurajima Boat Terminal, just a short walk brings you to the Sakurajima Visitors' Centre, with its amazing high-tech simulation of a volcanic eruption.

The JR (Japan Rail) Red Bus circles the island (a round trip of 36 km), a trip that's free to holders of the JR Rail Pass. The bus climbs slowly along a winding road, while alongside the road, steam rises from a thousand hidden crevices. The route takes you past a lunar landscape of jagged lava-boulders, with gingko trees and pines struggling to re-generate themselves.

A good spot to alight is at the Furusato Hot Springs, just below the elegant Furusanto Kanko Hotel. Here, for a total of ¥ 895 (about $NZ 13) you can bathe in a totally relaxing warm-spring pool right on the oceanfront. This pool also serves as a shrine, with statues of local deities placed gracefully among the rocks.

I was delighted when the charming young assistant to the manager insisted on driving me back to the boat terminal. Her act of simple kindness was disarming and genuine. This seems to be "par for the course" in Japan, where hospitality to strangers is an art form.

Back on the mainland, Kagoshima has plenty to keep the visitor both amazed and amused. A star attraction is the new Kagoshima City Aquarium, right at the Sakurajima Ferry Terminal, which just opened on 31 May 1997.

The station precinct also has an outstanding Museum of the Meiji Restoration, together with displays commemorating Okubo Toshimichi, one of the leading lights who helped end Japan's isolation in the Restoration of the late 1860s.

From Kagoshima, all roads lead east, past the awesome Kirishima National Park, to the "sun-coast" of Japan, the Nishiren district.

Aoshima is about half-an-hour by train south of the prefectural capital, Miyazaki, along the Nishiren coast. Warm ocean currents make the climate here the warmest in mainland Japan - only if you go another thousand km to the south (to Okinawa) will you encounter similar weather.

Aoshima Island, now connected to the mainland by a footbridge, is the main attraction of Aoshima. In the middle of the island is a shrine, and on the southern side a graceful Torii gateway looks out to sea.

From a shop-front in the middle of Aoshima town, an old woman stares at me in amazement.

"What", she must be thinking, "is a hairy gaijin doing in a place like this?"

She has a point. I was wondering the same thing myself.

Aoshima Island is surrounded by wavelike rocks, believed to be (only) 15 to 30 million years old, known as "Oni-no-Sentakuita", or The Devil's Wash-board. This formation was declared a "Precious National Monument" in 1934, long before such appellations became fashionable.

North of the attractive city of Miyazaki, there are not many places of note on the east coast of Kyushu, until you get to the spa city of Beppu, with its hot-spring baths, monkey park and sex museum.

Beppu is bigger than you'd think. It's surrounded by lush mountain-slopes, dotted with the houses of the rich and infamous, towering into the sky and mitigating somewhat the tawdry image of the City.

Fukuoka (othwise known as Hakata) is about the same size as Honolulu, and is the biggest city in Kyushu. It's mainly of interest as a jumping-off point for the western peninsula, including the now lively and scenic waterfront city of Nagasaki, with its grippingly sad atomic bomb history.

Nagasaki, as we all know, was the site of the second and by far the biggest A-bomb blast of World War II. But if this place evokes only sad images of one of the cruelest acts ever perpetrated, be prepared to be surprised - Nagasaki offers a great deal more than just war memories.

This beautiful seafront city, rising out of the water like a Japanese version of Rio, today wears an easygoing aura of harmony and prosperity. The most "European" city in Japan, Nagasaki has for centuries been a gateway to the outside world.

Nagasaki's links with the West began in the mid-16th Century. The daimyo (warlord) Omura Sumitada converted to Christianity in 1563, and with the help of Portuguese traders established the port of Nagasaki on its superb natural harbour site. The name Nagasaki, which literally means "long cape", is derived from the promontory around which the city expanded and prospered.

Surrounded on three sides by Mt Kompira and the ranges of Mounts Hikosan and Inasa, Nagasaki was in part chosen by the Portuguese (or Nambanjin - "Southern Barbarians") as a site easy to defend. It's the very same geographical features that make so the city so attractive today.

Nagasaki's "Memorial to the 26 Christian Martyrs" commemorates the crucifixion, in 1612, of 26 Spanish and Japanese Christian believers, an act that was followed by the official banning of Christianity in Japan from 1614 right up to 1873.

It's hard today to understand why Christianity was prohibited. The Japanese are noted for their religious tolerance, and the persecution was probably occasioned by political rather than purely religious factors.

You can still see the remains of some buildings on Dejima Island today. Best of all, there's a large-scale model of the original settlement, showing how Dejima will look once the settlement is fully. This restoration is scheduled for completion by the year 2010.

Today, Nagasaki is still defiantly European. The Dutch heritage of Nagasaki has given birth to several nearby attractions. The first was Holland Village, an amusement park designed to replicate 17th Century Holland. But the biggest and best of them all would have to be Huis ten Bosch.

Huis ten Bosch, a Dutch-theme park the size of Monaco, lies on the tranquil shores of Omura Bay, just 80 minutes by train from Nagasaki.

Among the four million visitors that Huis ten Bosch draws each year, reactions vary widely. Opinions range from "it's well-done" (from a Dutchman who is visiting from Leiden) to "it's too artificial" (from a lady teaching Japanese to Westerners in Tokyo).

But overall, Huis ten Bosch is well worth a visit, if only for the amazing sound-and-light spectacle that floods the harbour each night.

There's plenty else to see in Kyushu, if you have the time. For nature lovers, Aso National Park, just east of Kumamoto City, lies in the world's largest volcanic crater, over 120 km in circumference. Within this crater, over 100,000 people live and work, under constant threat of further eruptions.

Sadly, this trip is about to end, just south of where it began. Ibusuki is a neat little resort town on a peninsula, a little over an hour by train from Kagoshima. This time of year (Early June) it's out-of-season and quiet, but along the palm-treed esplanade, kimono-dressed vacationers are strolling lazily.

Maybe their restful state is due to the famous hot-sand "baths" of Ibusuki. Here, masochistic visitors are immersed to their necks in hot-spring fed black sand. It's said to be a cure for which there is no known disease.

Just possibly, you could say the same thing about the rest of Japan, too.

Acknowledgments: The author gratefully acknowledges the assistance of Ansett Australia, Finnair and the Japan National Tourist Board in facilitating this trip.

Getting around:
People in the know swear at Japanese rail prices, but swear by the JR Rail Pass. With one of these passes, you can recoup your expenditure in one single trip.

The JR Pass also takes you right around Kyushu, with the night train from Miyazaki being an additional option. This train, the Dream Nichiren, departs Hakata 2250 and arrives Miyazaki 0648, with the return train leaving Miyazaki at 2330 and arriving Hakata 0657.

With the Pass, you can also cruise Sakurajima Island by red bus, getting on or off at will.

Finally, the excellent night train Akatsuki has a state-of-the-art non-sleeper carriage with near full-bed recliners, a good buffet and a cosy lounge. This non-sleeper part of this train is also included in the JR Pass. The Akatsuki leaves Nagasaki at 1944, arriving Shin Osaka around 0700 and Kyoto 0754. In the other direction, the Akatsuki leaves Kyoto 2032 and arrives Nagasaki 0847.

From Nagasaki it's about 40 minutes by local train to Huis ten Bosch.

Admission to Huis ten Bosch:
A two-day free pass covering admission to all attractions costs ¥ 6,800. This is good value, covering also admission to Holland Village and cruises on the Amelia. But have a big breakfast before you come - food is very expensive here.

Guide-Books:
Lonely Planet's Japan, a Travel Survival Kit is unsurpassed. Of complementary value are Jim Rickman's Japan for the Impoverished (Borgnan Corporation), excellent for advice on cheap rail travel, but not much else; and Gateway to Japan, by June Kinoshita and Nicholas Palevsky, superb in detail but super-confusing in layout.