Death of a Beijing Flea Market 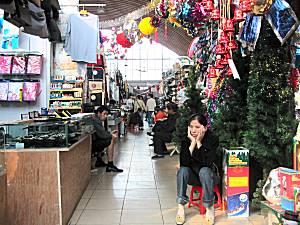 The day before the wrecking ball... 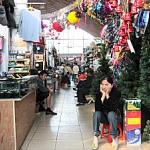 As the year 2002 draws to a close in Beijing, I find myself reflecting on how much change just one year has wrought. While much has fallen to the tender mercies of the wrecking ball, the place I'll probably miss the most is the New Yabao Lu flea market, knocked down on Halloween Day. Some mourned its passing; those who were never fans of the crowded wheel-and-deal atmosphere under the market's tin domes were less sentimental. Most agreed that, with land values inside of the Chaoyang district skyrocketing with no ceiling in sight, there is little room for single story, sprawling flea markets so close to Beijing's big money. All agreed that it was bound to happen sooner or later. The market stood in strange contrast to its nearest neighbor, the-ultra modern Full Link Plaza; kind of like a sprawling trailer park dropped outside of Buckingham Palace.

I often shopped at Yabaolu. I liked the market's collective everything under one roof philosophy, and more than once found myself trolling through narrow aisles peering into the stalls trying to fill an eclectic shopping list - socks, pickled garlic, battery charger, incense burner. But this variety could also be a curse, especially when pressed for time or short on cash. More than once, I found myself leaving the market in a strange daze, clutching packages filled with unintended purchases hours after popping in for a roll of scotch tape or a pot of yogurt. The unwavering sales pressure of some of the merchants could also get on my nerves. "Look-a, look-a" from a saleslady who'd seen me twenty times before. "Peng-yo, buy some fruit" from a guy selling what had to be Beijing's most overpriced (and often sour) pomegranates. The fruit section was best avoided entirely, actually, and will not be missed by this writer.

As I walked through the market just a few short weeks ahead of the wrecking ball, I sensed a palatable heaviness in the air. I stopped to chat with some of the merchants who would about to pull up stakes and move. Some told me that they'd be moving over to a similar market in Sanlitun. Others said that they'd rented stalls over in the smaller markets in the vicinity of the old Yabaolu market. There was some talk of a new market somewhere, but Mr. Ho, who sold incense and religious icons in the alley between buildings one and two told me that rent would be too steep for a businesses like his in any new buildings. The sister - brother team who sold yogurt and beverages by the East entrance hadn't figured out where they'd go. As for the customers I spoke to that day, all expressed sadness at the immanent demise of their bazaar of choice. "It's not the prettiest place, but it's a great place for bargain hunting" An American shopping for winter coats told me.

What I already miss is having been a part of the mixture of nationalities roaming the aisles. It's proximity to the embassy district made Yabaolu to become a cultural nexus of commerce like no other. Women in chadors fingered lace tablecloths a few stalls down from European backpackers looking for replacement tent spikes. Nubian princesses with corn-rolled hair turned up their noses at less-than-perfect quilted bedspreads as a Russian leather merchant haggled for a bulk discount on coats with his Chinese counterpart just a couple of aisles over. From north to south, east to west, Yabaolu played host to individuals of every nationality. The new buildings that will spring up where Yabaolu once stood may well service a higher income bracket, and will undoubtedly have cleaner toilets. And there are certainly still plenty of places to bargain shop in Beijing. But no combination of restaurants, fashion outlets from around the globe or internationally-staffed offices will be able to recreate what has been lost. Like whatever bazaar might have sprung up around the Tower of Babel's construction site, the cultural mélange of Yabaolu is gone, demolished by the relentless plow of progress and slated to fade from Beijing's collective consciousness entirely.