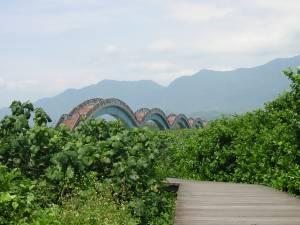 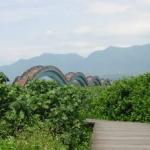 Part Three - Surfing Taiwan or Not

I woke that morning at the crack of dawn, trying to piece together the events that had reduced me to sleeping on a picnic table on a beach somewhere on Taiwan's east coast. It was all coming back to me now - the rat in my hair, the terrified screams, fleeing out into the cool night. Still, it was a lovely morning, and the picnic table wasn't too uncomfortable, as picnic tables go. I took a few shots of the sun rising over the beach, and wondered how many hours it would be before the snack shop opened. Cars were starting to drive by, and sensing that it was only a matter of time before somebody came by expecting to eat their breakfast on my bed, I rolled up my sleeping bag and headed back to Pete's house.

He was still asleep when I got there, as were two other surfers who'd come by a few hours after I'd left.

"Flat" I answered. I knew that much.

"Yeah, we figure we'll get up around noon, after the tide's gone out." He replied, and promptly fell back asleep. I wondered if they knew about the rats.

I was wide awake and surprisingly refreshed, so I decided to head north and have a look at some of the lovely tourist traps on the road that stretches from Taitung to Hualien. It was still pretty early, and the nearby "aboriginal culture center" hadn't opened up yet. The aboriginal culture center is one of Taiwan's more famous, and cheesier, tourist traps, built to look like a genuine Ami village, complete with thrice-daily genuine Ami folk dancing, a genuine Ami gift shop, and a genuine Ami parking lot to accommodate tourists who see no irony in visiting a phony "aboriginal folk center" located dead-smack in the center of actual aboriginal culture. But what the hell, it probably creates much-needed employment for the locals.

The tourist trap I really wanted to experience were the Eight Fairies Bridge; eight graceful arches that form a bridge leading to a beautiful little park filled with lizards, tourists and fishermen. Despite the carnival atmosphere in front of the park - overpriced stalls hawking food, t-shirts and postcards, the island itself is pretty peaceful, and walking over the eight arches is pretty cool. Rollerblading on them would have been cooler, but I'd neglected to pack my skates.

Even further up north was the "Cave of the Eight Immortals," an ancient series of caves that once held stone artifacts and other evidence of ancient civilization, now turned into shrines filled with beautiful Buddha statues. While I wanted to see the caves, a quick look at the sea told me that the surf was starting to brew, and I'd better get back to home base if I had any chance of catching my long-anticipated surfing lesson.

My relationship with the sea has always been tenuous. While the rest of the crew gleefully paddled out past the break zone (the point where the waves break), I kind of just hung there getting pummeled. Just getting that far was a chore, with the ocean rejecting me like a bad organ transplant, pushing me back a yard for every two I managed to take forward. After a half an hour of this, my chest and upper arm muscles were screaming, and I was nauseous from having swallowed so much water. Having completely failed to catch even one decent wave, I dragged myself and the board back onto the beach, one particular Tom Waits song going through my sun stroked brain: "The ocean doesn't want me today..."

The rest of the surfing crew were having a great time, and from the looks of the waves, they'd be at it for hours. I decided to head back to Taitung city and see what there was to see before the sun went down, so I packed up my trusty rental scooter and headed into town. I got myself some cold noodles and ate them at the Dragon - Phoenix temple, then headed over to the newly built park by the waterfront, a place that boasts wooden boardwalk-style bicycling trails and some strange, quasi-aboriginal sculptures.

Later on, I headed back to Gringo and secured my room. After spending the night on a picnic table, I liked the idea of sleeping in a nice hostel-type bunk bed in a rat-free room. After a short nap to recharge a bit, I went out to explore the town. The night was still young. I hung out for a while at a place called "Kasa", a mellow little restaurant / coffee shop run by Dave, a fellow expatriate and all around stand-up guy. There are very few places to get a decent pizza in Taitung, and fewer still where you can find a bagel. Kasa seems to be the "in" spot for Taitung's young, hip crowd, and as imitation is the sincerest form of flattery, its worth noting that another place calling itself "Kasa" has already opened up not too far away. The two are easy to tell apart, however; If you find yourself in a glitzy looking Taiwanese restaurant, you're in the wrong place. The original Kasa looks more like a restaurant you're likely to find on "Gilligan's Island."

My rent at Gringo's entitled me to a free pass at Amigo, one of (and possibly the only) the bright spots in Taitung's night life. I headed over there around midnight, and chatted with John, the owner of both Gringo and Amigo (hence the cross-promotion), who told me that Amigo was the first real youth scene oriented club in Taitung, offered a lively place for travelers to spend their nights, and was definitely not just a cheap clip-joint for picking up tarts. He didn't actually use those words, but I'm pretty sure that's what he meant. Amigo is actually a nice little club featuring a live DJ, and occasionally, live bands. "Things can get pretty swinging around here," John told me "Last year, some people passing through on their way to Spring Scream (an annual Taiwan alternative music festival) didn't even make it out the bar."

Despite the bounty of lovelies that were hanging around in Amigo, I decided to head back to my room and turn in reasonably early so I could get an early start hitchhiking back up the coast. People in Taiwan have an unusual reaction when you tell them that you plan to hitchhike. Why would you hitchhike, they'll ask, when buses and trains run pretty much anywhere that you want to go? Few people in Taiwan understand the attraction of being able to just stop and get out wherever you want, checking out anything that happens to catch your interest on the road without having to consult a timetable to consider when the next bus will come along. And fewer still understand that to some, having a Hong Kong cop movie blaring forth from an overhead television detracts from, rather than adds to, the overall travel experience.

In fact, hitchhiking in Taiwan is pretty easy, especially once you get outside of Taipei city. The thing to remember when hitchhiking in Taiwan is that, if you're a westerner, your ride will rarely be "free"; rather, you're going to be expected to make conversation for your ride, and if there happen to be children in the car, don't be surprised when they start dredging up half remembered snippets of English lessons and expect you to decode them. My third ride was in the back seat with a brother and sister combo who kept spouting out nonsense.

"Shaybo!" The girl would say.

The family would have taken me all the way to Hualien, but I asked them to let me out in front of the Cave of the Eight Immortals. Might as well avail myself of all the tourist attractions that the area had to offer, I thought. Perhaps my next ride would require less guesswork.

Concluded in Part Four, Homeward Bound on the East Coast Highway in which our narrator explores Hualien City and Taroko gorge before heading back up the Twisted Coast.