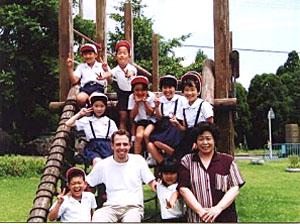 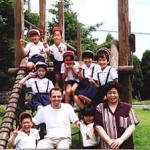 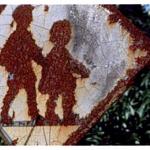 As a Senior High School teacher in the southern Japanese prefecture of Kagoshima, I don't spend a lot of time around young children anymore. Sure, I catch fleeting glimpses of their surprised faces and hear the occasional cry of, "Harro Sensei," as I speed around my small town by bicycle. However, once a month my office is kind enough to schedule a day that would be dreaded by less kid-oriented teachers, but for me is just like a paid holiday; I get to teach at an elementary school.

These rare days mean an early rise, often up well before the sun, and an hour-long trip into some of the most remote parts of rural Japan. At my office, there is usually a nervous, middle-aged man waiting to greet me with a timid handshake and an official bow before whisking me off to my morning classes. Alternately he is either the principal or the vice-principal. Less variably, he doesn't speak more than a few words of English.

Today, Uchiyama Sensei, a shy, balding gentleman in his fifties with the face of a man twenty years younger, was happy to be the one sent out to greet me, judging by his beaming smile and reassuring eyes. He looked prouder still to be chauffeuring me personally in his own treasured car. He swung around to the passenger side of his bright white sedan, holding the door open for me like an ecstatic teenager on his first date. A man's car is a prized possession in most countries, and this is all the more true in cramped Japan where personal space is at a real premium. For Japanese men, most without sheds, studies or garages, the car is one of their only refuges, a last frontier. His spacious new Nissan Sunny was covered in the usual junk that clutters Japanese cars. A plastic green vine snaked over and around the dashboard. Pink, synthetic irises sprung up haphazardly from the back seat. A yellow Pikachu doll hung limp from the rear-view mirror, and there were tiny, lifeless children's toys abandoned throughout the car like spilt jellybeans. I asked him if he had any children of his own. Gazing out at the pockets of uniformed students pacing towards school, he replied with a gentle smile, "Hai, Many, many, many."

There was a ceremonial-looking, slender piece of paper adorned with purple and gold Chinese characters stuck to a random corner of his front windshield. He must have anticipated my curiosity for he offered, "That is good ruck," and after a short thoughtful pause, "I bery bad duraiba." Nothing seemed further from the truth, as I turned my attention to the terrain edging by at the painfully slow speed of thirty kilometers an hour.

These isolated schools have no access to native English speakers, and the combined speaking ability of the teachers and the students usually amounts to little more than the alphabet song and counting from one to ten. A daunting environment, the anxious anticipation of which was not lost on my kind driver. In the broken dialect sometimes called "nihonglish," he was valiantly trying to prepare me for the questions I would soon be bombarded with, starting with the climate in Canada. "Totemo corrd yes?" "Hai," I confirmed for the thousandth time in six months. He must have sensed my apprehension towards playing the tedious, foreign teacher version of Twenty Questions, for he stopped that line of questioning momentarily, directing my attention with a stubby yellow-stained finger to his fragile looking car stereo. It appeared better suited for a student's first rust bucket than for any administrator's ride to the office. Only half bolted down, with rainbow-coloured wires sticking out at all angles like broken spaghetti, it was a wonder it worked at all.

He snuck a peak at me from the corner of his eye, before brushing away some loose cigarette ashes from the mouth of the tape deck, from which he removed a white cassette, blushing only slightly when I spotted the words, "Easy Everyday English" printed in bold letters on the label.

Uchiyama Sensei stretched over his knobby knees and fumbled with his fingers along the gray-carpeted floor, employing an intimate knowledge of his own jumbled mess. With a jolt he sat up, triumphant, presenting me with a tape of driving music, no doubt to smooth over the long and awkward gaps in our conversation.

"Help, I need somebody. Help, not just anybody." The early Beatles tracks trailed on, recorded with all the warmth and graininess of a treasured vinyl album.

"You rike Beatles, Mr. Noran?" he asked rhetorically, "I rike Beatles, everyone rike Beatles." I couldn't help but let out a little laugh at the thought of traveling halfway around the world to listen to an old Japanese man sing the Beatles, karaoke-style in his car. This only seemed to give him newfound confidence, for he continued to babble in a language I could no longer identify as either English or Japanese.

It's easy to see why these are such special days for them, since these rolling hills and rice-paddy dotted valleys rarely see any outsiders, let alone an English-speaking one. If you look carefully, you can spot man-made caves almost completely hidden by the underbrush-here is where entire villages trembled together during the carpet-bombing of the Second World War. Old families rarely leave this land, although in recent years, just as in Canada, young sons and daughters have left to find educations and jobs in the city. Just as I was wondering exactly what kind of reception I would be receiving, we pulled into the hundred year old stone and cedar building that is Ichinari Elementary School, and I could already see the wide eyes and inquisitive stares from behind the closed classroom windows.

I crammed my feet into some pink plastic slippers, universally sized to fit the average Japanese, but more likely to fit me up until the age of eight. My hosts ushered me in to meet the school's principal, a post always held by a man just about to retire. He informed me through the use of a bar graph and simple sign language that the school once held over two hundred students, but that now its enrollment was down to seventy-one and fading fast. In coming years it would be closed permanently, with the children bused to neighbouring villages. After a few minutes of uncomfortable silence, shelved between courteous sips of a thick, pungent green tea, we rose to meet one of the teachers, an athletic-looking man in his mid-thirties who directed me to the gymnasium.

Much to my surprise the entire school had gathered and were now clapping, cheering my introduction as if I were the Prime Minister. They had drawn Canadian flags carefully by hand and had created speeches for me using basic English. I was touched and reminded of the beautiful hearts of children.

A school of this size still separates classrooms by grade, even if there are only a handful of students in a given year. Today, they had separated the groups into combined 1-2, 3-4, and 5-6 classes for teaching convenience. First up, the smallest and most curious of the bunch, the first and second graders. Now, with only forty-five minutes to teach something useful, anything really, to these kids, you have to be realistic about your goals. Most people use this time to show the students something special about their home country using pictures or flags, or even short interactive games with prizes to peak their interest.

I've stood out in crowds before but I've never felt like such a star. I was Michael Jordan and Arnold Swartzenegger all rolled into one as far as they were concerned. Looking out over the crowd of tiny black heads, I saw nothing but gazing eyes and admirable efforts at English pronunciation.

The class bell rang and after bowing and saying official goodbyes, twenty-five kids ran towards me, arms outstretched with bits of paper for autographs! The next class continued with much the same reception and success. We even had the third and fourth graders practicing simple introductions like, "My name is...nice to meet you."

A cheerful, melodic bell to the tune of an old American nursery rhyme announced the lunch break. Lunchtime is never dull at a Japanese elementary school. In stark contrast to the mass staff-room retreat that usually occurs in Canada, the teachers actually eat lunch together with their students, a rare chance to show a different face and have a little fun. I was no exception to this rule. Every child eats the daily set lunch, a practice dating back to the hard years after the war, which helped to feed hungry bellies and ensure regular nutrition in poverty-stricken Japan. The program also conveniently serves as an exercise in etiquette, modeling manners and good eating habits, which helps to explain why this tradition lives on today. In fact, the students even help prepare and serve the meals, taking turns wearing charming white frocks and matching hair caps while dishing out plastic bowls of rice and soup.

Two darling, doll-faced girls, took my giant hands in theirs and led me slowly to a classroom, setting me at the head of the table to share some food and laughs with them. After joining them in clasping my palms together as if to pray and announcing "Itadakimasu" (I accept this meal), we dove at our chopsticks as the students began to chime in. A teacher translated. Questions ranged from the personal, "Do you have a girlfriend?" to the more predictable, "What Japanese food to you eat?" to even the insightful, "What are the most difficult things for you in Japan?" hinting that curiosity and open discussion were the natural seeds within the Japanese adult's often secretive shell. A darker skinned girl, sitting across from me in matching pigtails, kept flashing her perfect smile and making puppy dog eyes in my general direction. Meanwhile, the monkey-nosed boy on my right ran through the universal ten year-old comedy standards: lizard faces, horse sounds, and fart impressions. My knees were at either side of the kid-sized desk, up near my ears. I was cramped into their tiny circle leaving me to look more like a brown-haired giant than any teacher they had ever seen.

After lunch, the children ran out into the hallways to brush their teeth and wipe their faces, followed by an obligatory clean-up period full of sweeping and washing (Japanese schools do not have janitors). It was like a scene from the Brady Bunch, they way that they cooperated, working so well together.

I was rushed outside by three shrieking boys, their chests heaving, out of breath with excitement. For a moment I had forgotten my earlier promise to play soccer with them during the break. An impromptu game between the red and white caps left me howling in delight and realising that we didn't need to speak at all to appreciate each other's company that day. Afternoon meant one more class and more adoring crowds. The adoration was mutual.

At the sound of the final bell, I returned to my temporary desk to find a pile of cards, stickers, paper chains and a beautiful bouquet of origami flowers, complete with paper vase-all gifts from the children. I collected my treasure quickly, and as I walked down the old, creaking hallway on my way to the waiting car, some students gathered to see me off and proudly demonstrate their newly acquired English skills. One by one, they declared, "Mayonnaise is Yuji Tanaka." "Mayonnaise is Shinjo Suzuki." "Mayonnaise is Tetsuo Nakamura." I applauded their bold efforts and, after realising what they had intended to say, grinned widely and decided that far beyond any English skills we had taught each other about the beauty of cultural exchange and real communication between people.

A Tale of Two Cities