Flowers, Floats, and Fun: The Festivals of Thailand

This close-up of a painting hanging in a Chiang Mai cafe depicts the Song Kran 'water-war' festival as it was conducted long ago. In the bottom left hand corner, two Thais give each other a good dousing. 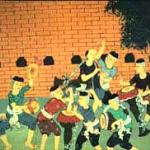 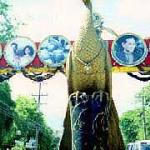 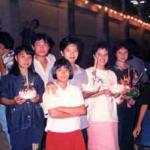 In medieval Europe, almost half the year was taken up by festivals or holidays of some kind. As Europe became more secular and industrial, many of these festivals vanished, and thus were never imported to the New World. This is one of the main reasons I, an American, live in Thailand instead of the New World. Hardly a fortnight goes by in Thailand without some kind of celebration, traditional or otherwise. This is not an exaggeration. The Thais celebrate their royal family, flowers, departed kings, their constitution, Buddhism, children, teachers, fruit, and elephants. They celebrate three new years. And, during their most unabashedly gleeful holiday, Song Kran, they even celebrate being soaking wet.

The festive year begins in Thailand, as it does almost anywhere, with New Year's Day, January 1st. This involves a great deal of drinking, the forging of ill-fated resolutions not to drink, the exchange of presents, and the explosion of fireworks.

Chinese New Year occurs soon after, the date varying from year to year due to differences between the Julian and Chinese calendars. Many people in Thailand are of Chinese descent, so the holiday is widely celebrated. A common gift is an envelope containing real or play money. Also occurring around this time is the Chiang Mai Flower Festival, which features increasingly international beauty contests as well as parades of floats bedecked with local flowers in full bloom. Makha Bucha Day falls on the full moon of February. It commemorates the unplanned assembly, ordination, and subsequent enlightenment of 1250 of the Buddha's disciples. On any 'Bucha Day' - bucha being a cognate of the Sanskrit puja - Buddhists and non-Buddhists alike are encouraged, for the sake of accruing merit, to vien tien (literally, 'circumambulate candle'). They find the temple of their choice and, carrying a candle, walk clock-wise around the temple three times.

Early in April, the Pattaya Festival takes place in the southern resort town of the same name. The festival includes beauty parades, floral floats, and fireworks. On the 13th, the Thai new year is ushered in by the glorious 'water-war' festival of Song Kran. A common sight in Thailand is paintings of ancient Siam or Lanna, depicting villagers gently and mirthfully dashing water on each other. Nowadays, while Buddha images in temples and homes are still washed with rose scented water, the scene on the street is rather more irreverent. For three days, from dawn until dusk, everyone - young and old, Thai and non-Thai - douses, shoots, and splashes everyone else with water. It is all-out war, but the ammunition is gentle and invigorating during this, the hottest time of the year.

In May, the beginning of the rice-planting season is recognized by the Royal Ploughing Ceremony. With the King presiding, rituals and ceremonies are used to predict the rice crop of the forthcoming year. On May's full moon occurs the preeminent Buddhist holiday of Visakha Bucha. This celebrates the birth, enlightenment, and death of the Buddha. Also in May is the Rocket Festival, in which villagers of the arid Northeast build enormous rockets and blast them into the sky as a request for plentiful rainfall from the imminent monsoons. Parades, dancing, and general wassail precede the launching.

Around this time a number of fruit fairs all over the countryside revel in local fruits - durians, rambutans, jackfruits, etc. Major fairs can be seen in the provinces of Rayong, Chanthaburi, Chachoengsao, and Hat Yai.

The reigning Queen's birthday falls on 14th August, and is also Thailand's Mother's Day. Government buildings, largely in Bangkok, are festooned with colored lights, while across the country huge portraits of the Queen are erected and illuminated.

During the Vegetarian Festival, taking place in October in Phuket, islanders of Chinese descent restrict themselves to a vegetarian diet for nine days. The festival's first day includes parades and displays. Also in October, a number of country fairs featuring regattas take place, the most famous in the northern province of Nan.

Vying with Song Kran as the holiday most eagerly anticipated is Loy Krathong, which falls on the full moon of November. A krathong is a circular boat decorated with banana leaves and containing candles, joss sticks, flowers, coins, incense, a lock of hair, or a fingernail clipping. People may choose to build their own, or buy them pre-made at roadside stalls. Making a wish, they then float (the 'Loy' of 'Loy Krathong' means 'float' or 'launch') the krathongs into nearby bodies of water. The ceremony acts as both a token of homage to Mother Water - the Goddess of Water, or water collectively - and as an act of self-redemption. The floating ceremonies continue for two days and are accompanied by parades, fireworks, awesome crowds, general revelry, and, in the cities, nightmares of traffic control. Also in November, in its third week, occurs the Elephant Round-Up in Surin, Northeast Thailand. Including folk dances and traditional performances, the Round-Up's main attraction is its one hundred elephants, who demonstrate their majesty through staged wild-elephant hunts and reenactments of medieval, martial elephant parades.

Straddling November and December is River Kwai Bridge Week, which features a sound-and-light show at the famous bridge in Kanchanaburi, archeological and historical exhibitions, folk dances, and rides on trains powered by steam locomotives of World War II vintage.

The most important royal holiday occurs on 5th December, the reigning King's Birthday. He gives an influential address, and food festivals, dances, songs, speeches, and candle-vigils honor him. To close the year out, the Thais, though almost exclusively Buddhist, mark Christmas in a very modern, Western way - by putting up decorations, wearing Santa Claus hats, and hitting the department stores. And then it is New Year's Eve!

If this prodigious list is any indication, the Thais would surely agree that the uncelebrated life is not worth living. But festivals do not alone make Thailand festive. Nearly any auspicious event is turned into an excuse for exuberant celebration. May it ever be so.

A Calendar of Thai Festivals

When: 1 Jan
What: New Year's Day
Why: Western Calendar
Where: Everywhere

When: Around Early Feb
What: Chinese New Year
Why: Chinese Calendar
Where: Everywhere, Especially Trang and Bangkok's Yaovarat District

When: Feb Full Moon
What: Makha Bucha Day
Why: Buddha's Ordination of 1250 Disciples
Where: Temples

When: Early April
What: Pattaya Festival
Why: Why Not?
Where: Pattaya

When: Apr 13-15
What: Song Kran Festival
Why: Thai New Year, Homage to Water, A Chance to Cool Down
Where: Everywhere, Best in Chiang Mai

When: May Full Moon
What: Visakha Bucha Day
Why: Celebrate Buddha's Life Cycle
Where: Temples

When: July Full Moon
What: Asanha Bucha Day
Why: Beginning of Buddhist Lent
Where: Temples

When: July Full Moon
What: Candle Festival
Why: Parade of Sculpted Lent Candles
Where: Ubon Ratchathani

When: July Full Moon
What: Tak Bat Dok Mai
Why: Offering of Flowers to Monks
Where: Saraburi

When: October
What: Vegetarian Festival
Why: Celebrate Vegetarianism
Where: Phuket

When: November Full Moon
What: Loy Krathong
Why: Homage to Mother Water, Redemption of Sins
Where: Everywhere

When: 25 December
What: Christmas
Why: Shop, Decorate, and Wear Funny Red Hats
Where: Everywhere