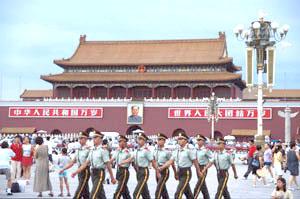 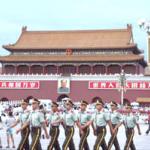 It's late April, and Beijing is certainly not the most popular vacation spot for Americans. The American and Chinese governments are still bickering over the collision of an American spy plane with a Chinese fighter jet, and yet here I am arriving in Beijing. I had planned the trip months earlier. My friends Peace and Brian are studying here for the year, and I didn't want to miss this chance to see Beijing. Little did I know that I would be visiting during a major diplomatic crisis. Needless to say, my mother is not thrilled about my travels.

And yet, when I arrive, all this seems strangely irrelevant. Sure, people stare at me (there are, after all, few redheads in China), but nobody is really bothered by my presence. I am braced for a search of all my possessions when I arrive at the airport, but the customs officer simply waves me through. In short, nobody seems to care that I'm American.

According to Peace, my taxi ride from the airport is an especially fitting introduction to China. Not only does the driver almost get us killed a few times, but he also tries to overcharge us by about ten dollars. Ripping off foreigners is something of a hobby for taxi drivers here, but my friends are not about to take this. As I stand on the sidelines with my suitcase, they argue voraciously with the taxi driver. I don't understand Chinese, but it doesn't matter. This is still a great show. Voices are raised. Fists are slammed onto the car. Fingers are pointed. And a crowd gathers.

At one point, Peace, who -- despite her name -- is anything but peaceful, yells "Fangpi!" and the cabbie takes great offense that a woman would utter such a word to him. It means literally "go fart yourself," and it's the first Chinese word that I will learn, shortly before "hello" and "thank you." Eventually, the driver gives up and leaves without the extra ten dollars. Score one for the foreigners, although I'm willing to bet that in this battle the taxi drivers are far ahead.

"Welcome to China," Peace says with a laugh as the cabbie drives away.

Peace and Brian live in a dormitory at Beijing's Central University for the Nationalities. For the wonderfully affordable price of $9 a night, I'm staying in a room just upstairs from them. While the room is cheap and convenient, unfortunately it's also a pit.

"If it touches the floor, forget about it!" Peace tells me, and I see her point when she explains that the staff cleans the entire dormitory with just one mop. She hands me a pile of disinfectant wipes, and I douse my room with them as if surgery will be performed on every surface.

And then there's the bathroom. It's just one small, rusty room. From left to right, there is a sink, shower, and toilet -- with no separation at all. The toilet is mere inches to the right of the shower. As Brian gives me the grand tour, he informs me, "Er, you might want to do your business before showering. Otherwise, you'll get wet ass." It is some of the best advice I have ever received.

The next morning, after I have slept off some but certainly not all of my jet lag, we start sightseeing. We begin at the most logical spot -- Tiananmen Square. I'm not sure if anything new can be said about the square. It's just so very big and so very ... concrete. To western eyes, it seems jarring to see such a large public place with so little grass. Occasionally, there will be some grass near monuments, but that's all. I can't quite call it pretty, but it is impressive.

We walk to the top of Qianmen Gate on the south side of the square. In one direction, I can see a McDonald's. In the other direction is the building in which they preserve the dead body of Mao Zedong. On one side is capitalism; on the other, communism. It's a fitting introduction to Beijing.

Inside Qianmen, we encounter a strange little museum. On the first two floors, there are maps and photos of old Beijing, while the children's section on the third floor is dominated by large framed posters of cartoons. We think nothing of the children's section at first, but then we take a closer look at the cartoons and discover that subtlety is not a specialty of the Chinese government.

In one cartoon, the first frame shows a boy playing a video game. In the second frame, he sticks a knife into a woman. Peace translates, and we learn that this woman is the boy's mother. In the third frame, the boy stands over the body of his dead mother. Finally, in the last frame, he looks very sad, as he is led away in handcuffs by the police. I'm not sure, but I think the authorities might be trying to make a point about video games.

In another cartoon, a boy is seen talking with his friends. In the next frame, we see him standing at the back of a theater. On the stage, a woman is undressing. There's also a couple in the audience making out beneath an ominous cloud of smoke, while the boy looks on. In the third frame, the boy and his friends are attacking a woman. In the final frame, we see only his sad face locked behind a jail cell.

There are dozens more of these cartoons, but after a few Peace and I get sick of all the ghastly scenarios. "Hey, kids, here's another way you might screw up!" they all seem to scream. We yearn for a simple Pokemon cartoon, but it's all little boys and little girls destroying their lives. It's definitely a strange thing to see on my first full day in China.

Next, we walk north through the Square and into the Forbidden City. I have seen the Forbidden City many times in pictures, but until you visit, it's impossible to fully comprehend the massive scale of this place.

As I enter, my first thought is: "All this for one guy?" There is so much here that I still don't know how the emperor kept track of it. All the names of the buildings are wonderful, but so easily confused. Pity the poor eunuch who thought that the emperor told him to report to the Hall of Supreme Harmony when he really said the Supreme Harmony Gate.

The building names are my favorite part. The lack of subtlety is just lovely. There's the Palace of Heavenly Purity, the Hall of Great Harmony, the Hall of Middle Harmony (whatever that is), the Imperial Supremacy Hall, and the Divine Military Genius Gate, just to name a few. Finally, near the end, when we are starting to wear out and have seen more buildings than our minds can process, we come across the aptly titled Palace of Endlessness.

We peer into the various buildings and see items that are hundreds of years old. These are strangely preserved relics. Layers of dust cover the thrones. Some buildings have open windows through which we look; with others, we must stare in through fogged Plexiglas. These latter buildings sometimes seem almost abandoned. The maintenance is uneven at best. In one spot, you will look into a building and see a majestic throne covered with gems and gold, but just a few paces to the side, the paint will be peeling off pillars.

There are other strange details as well. At one point, we are shocked to walk past a Buddhist monk filming the sights with a video camera. Apparently, he hadn't taken his vow of poverty quite yet.

We also walk past a bathroom that is closed. A helpful sign in English proclaims, "A construction site is trouble for you, Excuse."

And, even here, capitalism seems to be alive. On one sign, we read all about the Hall of Great Harmony and then learn that it is "Funded by the American Express Foundation." Great harmony, don't leave home without it.

It's simple to get lost here, and I wonder what happens at night when they close. It seems as if it would be easy just to pop down a side path away from everyone and spend the night camping out in the realm of the emperor.

Eventually, when we tire of all the imperial splendor, we jump into a cab and head back to the dormitory. It's another terrifying ride. Peace is impressed with the taxi driver because he takes us through all sorts of tiny side streets and gets us back in record time. I'm impressed merely because I still seem to be alive after the ride.

If you're ever looking to develop an action-packed video game, you could do much worse than Beijing Cabbie. Cyclists, pedestrians, taxis, buses, and even the occasional donkey all jockey for position on the road, and nobody ever yields. Least of all, a taxi driver. Driving in Beijing seems to be one giant game of chicken.

At first, I expect to die, but soon I'm starting to enjoy our near collisions. It must be the jet lag. Somehow, I start to assume that I will survive. Peace, meanwhile, is immune to the thrills. "You just get used to it after a while," she explains nonchalantly.

Later, Brian joins us for dinner, and we end the day with a meal of Beijing duck. In fact, it's my first time ever eating Beijing duck. I have read that a serving of this can be quite a show. Often, a restaurant will bring an entire duck to the table and carve it right there in front of you. Others will carve the duck out in back, but at least bring out the duck's head on a plate, as if to say, "See, we really did have a duck back there."

Our restaurant is decidedly low key. The waitress simply brings over a plate of duck meat and puts it in front of us. I'm both happy and sad at this development -- sad because I'm missing out on the spectacle but happy because at least I don't have a poor little ducky head staring up at me as I digest its body. The head of the duck is actually considered a delicacy here, but somehow duck brains just don't appeal to me.

Beijing duck is, in a word, greasy. Friends at home had warned me of this. Now, Brian informs me that the Chinese consider Americanized Beijing duck to be far too dry. It's served here with scallions and rolled in pancake bread to soak up the grease. I enjoy it at first, but after a short time, I'm sick of all the grease.

Brian and I are actually the only ones to tackle the duck, as Peace happily eats a vegetarian dish. "I don't eat duck! No way!" she announces vehemently. If the duck head were at the table, I'm sure it would nod in appreciation.