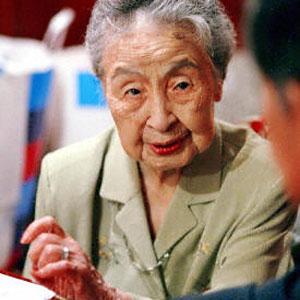 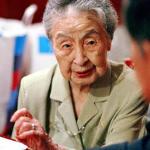 As Japan's population ages at a speed no other nation has ever experienced, its society is getting a morale boost from elderly stars including a centenarian bar hostess, a prominent doctor in his 90s and a 70-year-old who became the oldest person to conquer Mount Everest.

At her tiny bar, Gilbey A in Tokyo's glitzy Ginza district, Hideko Arima has occupied the same stool at the end of the counter for more than half a century. Turning 101 on May 15, Arima has become a magnet attracting women across the nation as well as veteran male patrons whom she has known since their youth. As she arrives at the doorstep of Gilbey A, wearing a light beige French-made spring coat and Chanel cologne, passers-by ask to shake her hand.

"Mum, I have something to tell you today," a man in his 60s says as he enters the bar, which seats up to 30. "A love story, is it?" Arima quips. She was born into a wealthy village headman's family in 1902, the year when Japan emerged as a military power through the Anglo-Japanese Alliance which aimed at countering Russian expansion in Manchuria and northeast China. She looks like a sweet upper-class granny, but her pluckiness is evident despite her polite manner.

"Do you think I kept this business this long just because I like to talk to other people? Business is not that easy," she said in a recent interview at her bar which is still housed in a pre-war wooden building. "I used to read not only news in three newspapers but also the advertisements ... so that I would be able to talk about any subject brought up by my guests," she said.

Believing a woman can do something other than look after the home, she opened a coffee shop in Gotanda in 1948, then a semi-rural district of Tokyo, when life for many Japanese was still a struggle for survival after the country's defeat in World War II. She moved the shop to Ginza and turned it into a bar in 1951, prompting disapproving frowns among her upscale relatives and schoolfriends.

"They turned their backs on me in such a blatant way that I thought, 'If you say so, fine, I won't go along with you'," she said. "This may be the reason I kept my business so long, as it would have upset me if I had seen them saying: 'You see, she's given it up already'."

Arima said the saddest moment in her life was when her only son, Tadahiko, died in 1986 from liver cancer. His wife had a stroke immediately after his funeral and remained in a coma for one and a half years until her death. The couple left her three grandchildren. Her husband, Hikosuke, died of a stroke more than four decades ago. Arima lives alone. Her meals are simple and her current favourite food is rice balls from a convenience store. She only started drinking herself after she turned 90.

Other active Japanese seniors are still setting examples and records. Veteran professional skier, Yuichiro Miura, 70, who first won fame as the first person to ski down the South Col of Everest in 1970, became the oldest person to conquer the world's highest peak last week. He made the challenge after saying: "I want to cheer up Japan's greying society as you can do something even at age 70."

But 70 is still young, according to Shigeaki Hinohara, a 91-year-old doctor who set up the Society of New Elder Citizens in 2000, to encourage people aged 75 or older to play a greater role in society. He heads St Luke's International Hospital in Tokyo and one of his latest books, "Ikikatajozu (Good at Living)" has sold 1.2 million copies since December 2001.

"There is some rubbish among the 36,000 genes in your body, but many good ones are left unused at the age of 75. You can still drill oil," Hinohara told reporters in March. Hinohara said age 75 would be time to "make a final jump" in life.

Miura's father Keizo, together with Yuichiro and grandson Yuta, 37 celebrated the elder Miura's 99th birthday by skiing down western Europe's highest peak, Mont Blanc, in February. Hinohara believes it is important to have role models of active senior citizens when society is rapidly ageing.

It took Japan only 24 years to 1994 to see the ratio of people over 65 in the overall population double from seven percent to 14 percent, while it is estimated it will take 71 years to 2013 for the same to happen in the United States, he said. One in four citizens will be aged 65 or older in Japan by 2020, according to a government estimate.

Hinohara serves as chairman of seven non-profit organisations and lectures frequently to large general-public or professional audiences. "It's fun to pass other people on a moving walkway when I travel with a 10-kilogramme (22 pound) case," he said. "The other day, I was late for a lecture on the third floor at a university ... I rushed stairs up to realise I was on the sixth floor, so I had to go down again," he said.

Hinohara, who has seen well over 4,000 people on their deathbed, knows he is "waging a losing battle" as medicine cannot conquer death. But people should be able to say "thank you" to relatives and friends in the final moments of their life rather than to be sustained by tubes, he wrote in his book. "Death is the last performance in your life."