Jewel in the ruins 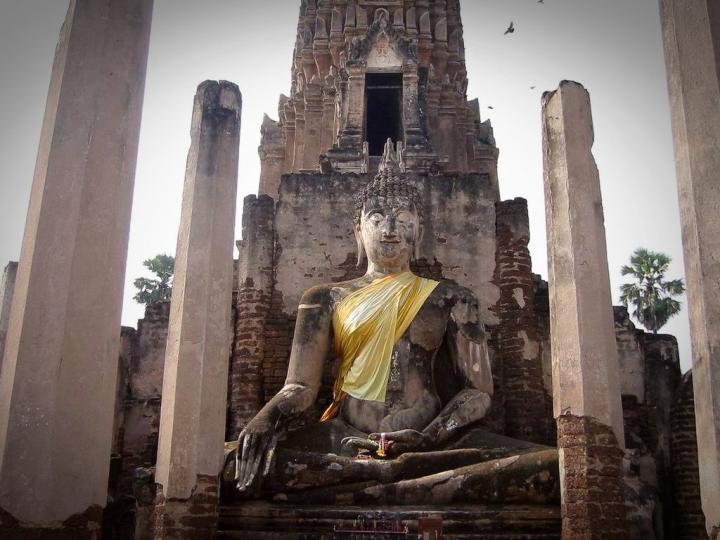 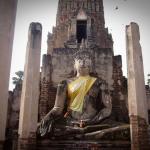 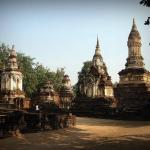 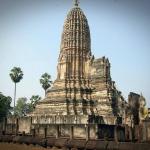 My last visit to Sukhothai was in 1992, a year before Thailand’s oldest city was listed a World Heritage site by Unesco, that was very long time ago. Recently, I revisited the city to recall old memories. The new town of Sukhothai is undergoing rapid modernization but the historical park’s ruins are still as they have always been.

Among the ruins in Sri Satchanalai Historical Park, which dates back to 1238, are glorious monasteries and pagodas, which flourished in the original capital of the first Thai kingdom. Sri Satchanalai has long been famous for its unique “Sangkhaloke glazed pottery”, a major export item during the Sukhothai period.

Sri Satchanalai has a sister-city, Sukhothai, part of the same kingdom ruled by King Ramkhamhaeng the Great who presided over his subjects like a father looks after his sons.

To the Thai people, Sri Satchanalai, by the Yom River, is the most important archeological site where Buddhism first took roots in this country. Today it attracts visitors from all over the world.

Before renovation work begun in 1953 by the Fine Arts Department of Thailand, the whole area was covered in thick green vegetation and treasure hunters excavated many monuments, helping themselves to priceless Buddha heads, amulets, old weapons and money.

Later, archeologists found evidence that there were human settlements there during the Dvaravati period from the 6th—11th century.

I used Sukhothai town as my base from where I would explore Sri Satchanalai again. Good hotels and guesthouses at a reasonable price can easily be found in Sukhothai.

“Nothing to do at night, it’s so quiet in town. Try the night market,” said the hotel receptionist. Yes, that’s what I should do, I told myself.

Sukhothai’s night market is a great place to eat and see the nightlife of locals but please keep in mind you can’t compare to the other night market in big cities like Bangkok or Chiang Mai.

The next morning, I left new town of Sukhothai for Sri Satchanalai-a journey of about 62 kilometers. My first stop was at Sawankhaloke district to visit Sawankharam Temple on the western bank of Yom River. On display inside the museum building were ancient pottery, utensils, antique decorative items and Buddha images plus many other ceramic treasures from the Lanna period. The museum is open Monday to Friday from 10:00 a.m.-6:00 p.m.; Saturday and Sunday 10:00 a.m.-8:00 p.m. Admission fee is 30 baht.

Sri Satchanalai Historical Park covers roughly 45 square kilometers, contained within the old laterite ramparts and surrounded by moats, which are the focus of sightseeing tours in its shady and peaceful atmosphere. A total of 204 ancient places have been discovered and their history recorded by the Fine Arts Department. Admission to the park is 40 baht and you can buy a nice pamphlet with a map for 5 baht at the gate.

Cycling is the best way to explore the ruins, so I recommended renting a bicycle from the shop before you get to Wat Phra Sri Rattana Mahathat. The cost is 20 baht per day. Private transport will enable you to wander at will around the hundreds of archaeological sites and kilns that dot the park compound.

I first visited Wat Phra Sri Rattana Mahathat or Wat Phra Prang, a large historical complex located one kilometer southeast of the bridge. At the main entrance of the temple I saw stucco figures with four faces decorated in ancient Khmer style.

If you come from Sawankhaloke district on the road No.101, a couple of kilometers off the main road, before approaching the park sign on the left, you will see a temple entrance painted in pink. From here you can walk across the Yom River via a suspension bridge to the temple.

I recognized a big tree in the compound of Wat where there used to be local people selling antiques, Buddha images and old pottery souvenirs. Sadly, they have all gone on the orders of the temple committee, which wanted to keep the area clean.

About 300 meters from Wat Phra Sri Rattana Mahathat is Wat Chom Chuen situated behind the village. It’s a small temple that was built in the Sukhothai period and it has a Sri Lanka-style chedi. The monastery buildings were built from blocks of laterite.

In the temple compound you can visit the archeological museum building displaying a human burial site with the remains of 15 people at a depth of about seven to eight meters. Archaeological excavations conducted here have also yielded evidence indicating that Wat Chom Chuen was initially constructed in pre-Sukhothai period.

The first two important monuments in the Sri Satchanalai you’ll encounter are the largest and most impressive in the ancient city.

Wat Chang Lom to the right of the entrance is distinctly Sri Lankan, with a characteristic stupa and 39 laterite elephant buttresses. (It’s unusual to find so many elephant sculptures still intact). If you ascend the stairs, you can walk around the base of the stupas and admire the 19 Buddha images installed above the terrace.

Wat Chedi Chet Thaew (Seven-Row Chedi) temple opposite Wat Chang Lom to the south within sandstone walls is discernible by a series of lotus-bud towers and rows of chedi or chapels thought to contain the remains of the former royalty. The chedi are adorned with 33 Buddha images and a beautiful stucco Buddha image seated under serpents.

Other monuments within the ancient city walls can be inspired within an hour. Wat Nang Phaya, southeast of Chedi Chet Thaew, is known for stucco bass-reliefs on the remains of the chapel. It’s easily spotted by the tin-roof shelter for protection.

Wat Khao Phanom Ploeng, a nearby hill topped by two temple compounds, offers an excellent view of the historical city from the top of its steep 112-step staircase. From the hill you can see the whole historical park. Just 10 minutes walk to a slightly higher hill to the west leads to the remains of Wat Khao Suwanakhiri.

Apart from the historical park itself, Sri Satchanalai offers many places of interest on its outskirts. There are more than 200 pottery kilns along the Yom River in the area around Sri Satchanalai. Several huge kilns have been excavated from the area and put on display at the Pottery Center for Study and Preservation of Sankhaloke Kilns located in Ban Koh Noi vilalge.

It was mid-day the weather hot. Fortunately, the shade of trees afforded me protection from the sun. As I was leaving Sri Satchanalai, a luxury coach arrived bringing a group of tourists to visit this magnificent ancient city.

The visit to Sri Satchanalai may be brief but it left me overwhelmed and deeply proud of the past splendour of this ancient Thai city, once the country’s spiritual heart but now reduced to a painful but poignant reminder of its former glory.