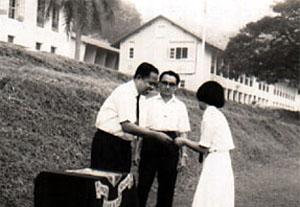 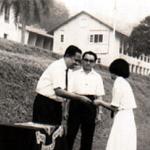 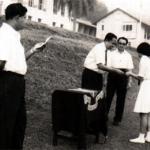 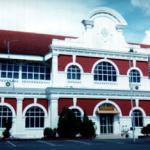 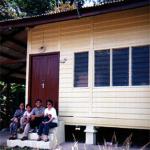 If it's a quaint, authentic Malay town with colonial influences you're seeking, then Kuala Lipis is the place to be. This little known treasure is situated in the state of Pahang, about three hours drive from Malaysia's capital, Kuala Lumpur. It is best described as an open-air living museum, a throwback to the colonial past. With the brace of old buildings, mostly built around the 1920s at the time of the gold-prospecting heyday, the town is left intact as when the British left. Kuala Lipis and her residents seem to revel in resisting to the maddening change that has transformed most Malaysian towns beyond recognition, most times with the cultural and architectural heritage obliterated by bland commercialism.

Kuala Lipis is quiet with a sparse population, while the only traffic jam you would encounter is when some recalcitrant cows decide to make the asphalt roads a passageway or when the Pahang royalty is in town with its retinue, stopping at Istana Hinggap.

Most of the young in Kuala Lipis when they reach working age inevitably gravitate towards the cities. Even the generations of Sikhs who had done yeoman service at the original police station have gone; there are a mere five families lodged at the precincts nearby.

I am of no exception. Since completing my Senior Cambridge in the historical Clifford School in the 1960s, I left for further education and career opportunities in Kuala Lumpur. Recently, and only for the third time since I left, I decided to return "home". And despite a time lapse of almost ten years since my last visit, there are still no obvious changes here. Only a new coat of paint for the rest house, a new bridge linking both sides of town and another newly opened rest house to serve as a getaway for nostalgic Lipis folk like yours truly. Lipis is still such a small town that people literally gawked at us when we walked along the two main streets in town!

There is also a 108-year-old Buddhist temple in town devoted to the pantheon Thean Hou on a strategic promontory of a riverine traffic before the advent of rail and road. It is only one of the three highly revered Thean Hou temples in Malaysia, the other two in Kuala Lumpur and Penang.

However, the rakit (boat houses) in town is no more. Since it was swept away by massive floods in 2000, the government have relocated all the boat houses further downstream. The only way to get to the rakits is a one-hour boat ride downstream, which we did not have time for during our short visit.

Every building in town still looked reassuringly very familiar. From the neo-classical Government complex with keystone arches and massive pediments, the rambling wooden railway station (which was completed in 1917 and linked Pahang to the then Federated Malay States), the Straits Eclectic shop houses complete with antique watches in one of the shops, Istana Hinggap with cherubic roundels albeit now with hideous modern glass additions, and old colonial houses where I grew up, with its Anglo-Indian facades of porte cochere and verandahs and quaint plasterwork molding on the grand door.

Then, there are the old and new rest houses, especially the grandiose one atop Residency Hill (the rest house was formerly home to the British Resident during the colonial rule) with a panoramic view. My only complaint is the new coat of paint on its exterior - a blood red exterior may be striking, but it certainly does not blend well into the relaxing atmosphere.

In its heyday, Kuala Lipis was the seat of Government and fount of Malay intrigues. It was the capital, from June 1898, taking over the administrative reins from Pekan (1889-1898), until Aug 27, 1955, when Kuantan became the new capital and has been so ever since. Although never officially a royal town, the Pahang Royal Family have grew up here due to safety concerns. With numerous hills surrounding this town, it is a naturally strong fortress.

Besides the more familiar landmarks in town, we ventured visited some of the best-kept secrets off-the-beaten track like the asbestos-roofed and walled "Sunlaws" plantation house of Gerald Hawkins, now owned by Pee Tiam Chai for growing oil palm and rubber trees. Howard Biles, the then Protector of Aborigines, had once stayed there as did, some say, the flamboyant Hubbock, the man behind Taman Negara. Hubbock's mysterious disappearance has made him Kuala Lipis's equivalent of Cameron Highlands Silk King Jim Thompson.

Also unusual was a visit to the partly "abandoned" residential complex in Lembah Bukit Betong, which belonged to the descendants of Wan Tanjung, who was in the thick of the Pahang Civil War (1857-1863). In some of the houses, most of them badly attacked by termites, including the remnants of a selendang (Malay scarf), were hung old photographs, putting faces to names and hinting at the awkward alliances in the early days when Sir Hugh Clifford was British Resident in Pahang, first in 1896-1899, and then again in 1901-03 before he took over the powerful post as Governor of the Straits Settlement and High Commissioner of the Federation of Malay States in 1929.

Another landmark I insisted on visiting is my beloved Clifford School (formerly Anglo-Chinese School), situated along Sungai Benta. It started off as an attap house in Jalan Besar in 1913 with only 12 male pupils. A new building in 1919 was destroyed in the 1926 floods, and the new two-story stone building was officiated by Hugh Clifford (and hence it was named after him) in 1929.

Until 1935, it offered Lower Cambridge education and in 1936, it was the first school to have full certificate class. During the Japanese Occupation, the school became the military headquarters of the dreaded Japanese secret police, the Kempetai. When I was studying there, the Japanese torture chamber built within the school compound was still standing. However, it was demolished in the 1980s, perhaps after too many a ghost story scared the school kids?

Heritage is not Kuala Lipis' only attraction. It's also strong on eco-tourism and sports, with the Jeram Besu rapids, the 18-hole Empang Jaleh golf course and the Lipis Valley golf course and Taman Tasik Burung Mandi. It is also close to Taman Negara and Kenong Rimba Park. The Kenong Rimba Park in particular, is very popular among European and American eco-tourists, who prefer it as an alternative to the more commercialized Taman Negara.

From Kuala Lipis, travelers have to take a boat to Tanjong Kiara along the river, going through some small rapids and verdant jungle on either side. The Gunung Kesong campsite is a good three hours hike from Tanjong Kiara. Along the way are three fascinating caves - Gua Batu Tangga, named thus because of the cave floor which is carved naturally into steps; Gua Tangkup where we found footprints and dung of elephants and Gua Telahup with its interesting stalagmites and stalactites. Wild animals spotted in this park include sun bears, tigers and elephants.

Whatever, the laidback charm of Kuala Lipis is the antidote to transport one back into time.

The best alternative for foreign visitors is to get there by train. There are two trains from Kuala Lumpur and one from Singapore every day. Alternatively, take a bus from Puduraya, the main bus station in Kuala Lumpur.

Getting into Kenong Rimba Park

Below Appu's guest house is one of the most famous restaurants in town, since the 1960s. The Low Kwan Restaurant is a must-visit for its speciality - special Jelawat Fish from the Jelai River.