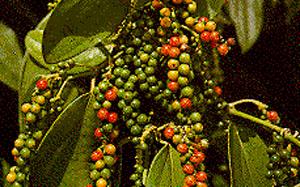 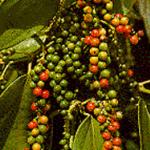 Piper nigrum would sound strange to most people; yet it is an important, common condiment that give a special taste to most dishes. Asian and the Middle East dishes in particular, relies on pepper and chilies for the fiery taste. Arabs add a lot of black pepper to their oats porridge during the fasting month and just about sprinkle it on everything else, such as grilled lamb and salads. The Japanese pepper their meat and seafood liberally in a teppanyaki feast, and you would see the teppan chef swinging two pepper mills over the hot plate of sizzling food.

As for Malaysian food, pepper appears in curry powder, in the soup base that goes with your instant noodles, in sauces, and just about every savory food product. Ground pepper is an indispensable spice in the home - for marinating meat, during cooking, and as a finishing touch at the dining table.

Throughout history, pepper has played a very important role in enhancing trade between the East and the West. The ancient Greeks and Romans valued it so highly that (in addition to loving it in their food) it was used as a form of currency, weighing it out like gold. Rome itself was once held hostage for a ransom of gold, silver and 3,000 pounds of pepper! Unfortunately, the trade routes to India closed with the fall of the Roman Empire, and pepper was virtually unobtainable in Europe until the Crusades.

Many of the Crusaders managed to bring pepper home with them, but its rarity and cost in terms of blood and travail made it extremely costly. So, once again, it was often used as currency.

In the Middle Ages, peppercorns were used to pay many obligations, and the term "peppercorn rent" survives until today - though today, it usually indicates only a symbolic token!

The Chinese were also early fans of the spice. The explorer Marco Polo claims that a city in Southern China imported one hundred times more pepper than was exported from Alexandria to Europe.

"I assure you," quotes Marco Polo, "that for one shipload of pepper that goes to Alexandria, there come a hundred such, aye and more too, to this haven of Zaytun (a town in Southern China)!"

In the Malay archipelago, the Dutch wrested the East Indies from the Portuguese, who themselves had tried to keep Arab dhow (ships) and Chinese junks out of the spice trade.

Pepper, the King of Spices -- from its romantic travels in ancient spice caravans, to the modern comedy convention of the pepper-engendered sneeze, comes from the berry of a vine. Two largest producers are Indonesia and India (their positions are interchanged year after year), with Brazil and Malaysia coming next. However, some of the best pepper grown today comes from Sarawak, where its cultivation was encouraged by the White Rajah Charles Brook in the 1870s.

Sarawak has today become a significant producer of high quality pepper, well-known for its strong flavor and aroma, yet less spicy compared to those grown in Brazil. Because of this, it is the highest exporter to countries like the United States, Europe, Japan, and Singapore. More than ninety percent of pepper is known as white pepper, and black pepper constitutes the rest.

All pepper berries -- green, black, white and red -- come from the same vine, only the processing is different in each case. Black pepper is harvested when the berries are a mature green, and then dried in the sun. For white pepper, berries are harvested when they are mature, then soaked in water, preferably running water. Next, the skin is discarded and the remainder is dried. Green peppercorns, usually seen with steaks, are berries which are either used fresh or preserved in brine.

Research have also reported medicinal and pesticide properties of pepper. In India, pepper has been found to have medicinal properties. The warming effect of pepper is believed to enhance blood circulation, especially among the elderly.

For true pepper lovers, there are two pepper perfumes in the market now: Sensasi and Amila. Both were developed by senior chemist Ng Siaw Chiung in the laboratory of the Pepper Marketing Board in Kuching. Ng was assisted by perfume blenders overseas who provided professional expertise, and took care to underscore the floral essences with a tiny, essential spark of pepper oil.

Another novelty would be newly developed pepper sweets. Spicy, tangy, reputed to be good for clearing a haw-hawking throat, pepper sweets contain natural pepper oleoresin. Now, this is one type of sweet even my grandmother would approve of!

Among the newly developed products, pepper perfume and pepper sweets may be considered novelties which generate positive publicity but don't really use up large amounts of the spice. They are popular souvenirs, however, and as such they have a vital function. They ensure the name Sarawak Pepper will forever be etched in the minds of the local or overseas travelers who buy them.

South Korea: What should Soccer Spouses Do?