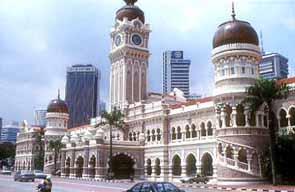 Sultan Abdul Samad Building began life a century ago as the Colonial Secretariat in Kuala Lumpur. 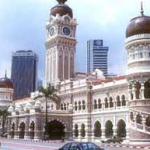 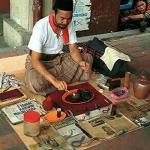 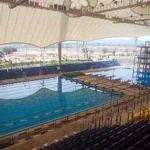 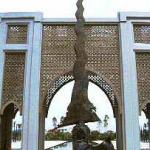 When the Union Jack was lowered for the last time at Kuala Lumpur's Merdeka Square on August 15, 1957, a new nation began to evolve from the colonies and sultanates of British Malaya. Slowly a true Malaysian identity has developed, underpinned until recently by strong economic growth. Nowhere is this identity more evident than in the booming city of two million people which sprawls beyond the Federal District and into neighboring states of Selangor and Negri Sembilan.

From an 1860's prospectors' camp at the junction of the Klang and Gombak Rivers, Kuala Lumpur soon grew into a prosperous tin miners' town, then became the seat of colonial power.

One of the city's most endearing features is the legacy of 19th Century British architects entranced by the Islamic heritage of Mughal India. Colonial administrators built an imposing Secretariat facing their sporting club and the cricket field which became Merdeka Square; today the century-old Sultan Abdul Samad building houses the Supreme Court. A.B. Hubbock designed Masjid Jamek, the Friday Mosque whose onion domes and minarets mark the river junction from which the city takes its name, as well as the equally ornate Kuala Lumpur Railway Station. Fine old mansions also remain, including the tourist information centre at 109 Jalan Ampang, and Carcosa Sri Negara, now the city's most luxurious hotel.

A different architectural legacy is that of the pre-World War II Chinese storekeepers, whose shophouses cluster around the Jalan Petaling markets. Traders spill their wares into the 'five-foot ways', covered storefront walkways.

Flyovers and overhead railways now interlace the old center of Kuala Lumpur around the river junction. Taxis and minibuses are cheap as chips, but traffic congestion often makes it quicker to walk. Fortunately this fast-growing metropolis is well-supplied with pockets of lush tropical greenery.

Islamic tradition also inspired many contemporary landmarks: Masjid Negara, the National Mosque; the Dayabumi Complex (including the main post office) and the National Museum. These three occupy a relatively compact area close by the railroad buildings, the National Art Gallery and the 90-hectare Taman Tasik Perdana or Lake Gardens.

Malaysia's Peranakan or Straits Chinese gave the world the distinctive Nyonya cuisine which blends Chinese ingredients with Malay spices like lemon grass and coconut cream. Nyonya, Malay, Chinese and Indian cuisines can all be sampled from hawker barrows at night markets or undercover food centers: one of my favourites is tucked away behind the General Post Office.

Fashion, jewelry and footwear draw shoppers into the boutiques and malls. Quality electrical and electronic consumer goods are well represented, many of them manufactured here under licence. Sungei Wang, opposite the Parkroyal Hotel, is representative of the major malls or shopping plazas.

At the city's heart, the 1930s Central Market has been transformed from a 'wet market' crowded with meat, fish and vegetables to a showcase for Malaysian crafts, food and cultural performances. Craft enthusiasts should also check out the Budaya Complex and the Kuala Lumpur Textile Museum.

Head to Jalan Tuangku Abdul Rahman, Little India, for batik, leather goods, men's wear, antiques and carpets, or up the road to Chow Kit Market for fresh tropical produce. Chinatown's Jalan Petaling is the place to pick up 'genuine fakes': dirt-cheap designer-brand tee-shirts and wristwatches (which may not be legal to import back into your home country). Herbal remedies, dried and pickled foods make more novel purchases.

Popular tour options include the Hindu shrine at the Batu Caves; the Royal Selangor Pewter factory or an excursion to the centuries-old trading port of Melaka (Malacca).

Malaysia's government plans intends Kuala Lumpur to lead the nation into the Third Millenium, envisaging a Multimedia Super Corridor stretching from the international airport 33 km (20 miles) south of the city, and opened in 1998, to the 452-meter (1,492 ft) Petronas Towers, sometimes dubbed 'Twin Peaks', which are presently the world's tallest.

In 1998 the capital proudly hosted the XVI [British] Commonwealth Games. The National Sports Complex took shape in a former rubber plantation at Bukit Jalil, just west of the newly-completed North-South expressway. The National Stadium forms the centrepiece, whilst the National Aquatic Centre seats more than 4000 spectators and the village houses 6000 competitors and officials.

Prime Minister Mahathir could never be accused of lacking vision - indeed one of his programs is titled 'Malaysia 2020' - but some critics wonder if the nation can afford to lift its sights so high.

Businesses operate Monday to Friday, with Saturday as a half day.