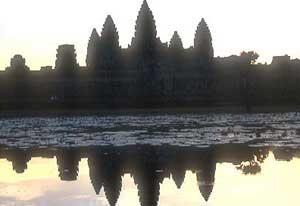 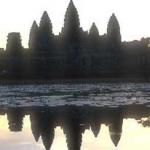 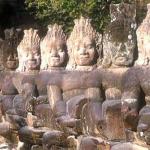 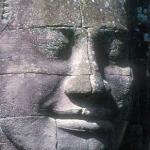 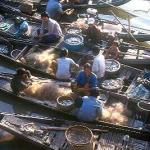 dividend: the ancient capital of the Khmer Empire now teems with tittering tourists, even in the pre-dawn darkness as we await the sunrise over the namesake 'mountain temple' of Angkor Wat.

Last night there must have been several hundred people gathered at the hilltop temple of Phnom Bakheng; and a similar number of local people enjoying a Sunday evening picnic beside the moat which surrounds Angkor Wat. How then to optimize your time at one of Asia's great monuments?

As at any popular attraction the world over - and especially in the tropics - make the best of the morning (pass up the hotel breakfast perhaps, there are plenty of food vendors at the monuments). Then you can take time out from the heat of early afternoon.

If they say you should see Angkor Wat at dawn, come back in mid-morning when it is much quieter. Don't bother hauling yourself up the steep stairway up the 'Sunset Mountain', Phnom Bakheng. A better place to watch the sunset is the third tier of Angkor Wat (which itself is too far from Phnom Bakheng to capture on film).

October - January and come during the cooler months of the rainy season, May - September. Rain falls in the mornings and evenings, but rarely does it fall steadily all day, and the smell of the fresh, green countryside adds another dimension to the experience.

Know before you go

The Big Four start with Angkor Wat itself, which stands apart from the walled city of Angkor Thom. Here you can easily spend half a day, or better, return at another time. Angkor Wat, built in the form of the mythical Mount Meru, sprawls across two square kilometers (510 acres).

Beyond the imposing South Gate, the Angkor Thom enclosure is dominated by the Bayon temple whose 49 towers each bear four of those gently smiling, enigmatic stone faces, said to be the likeness of the Buddhist emperor Jayavarman VII modelling himself as a Boddhisattva. Many of the bas-reliefs, painstaking restored by French and Japanese experts, depict daily life in the kingdom: hunting, farming, commerce and family life. Explore the Bayon before mid-morning and you will be glad you came this far.

East of Angkor Thom stands Ta Prohm, the 'Indiana Jones' monastery temple held together only by the arthritic tentacles of centuries-old kapok trees and strangler figs. The temple, which housed 2,470 monks and 600 dancers, was dedicated by the Jayavarman VII to his mother.

Twenty kilometers (12 miles) away the last member of my Big Four is the exquisitely-crafted 'miniature' temple of Banteay Srei, with its delicate reliefs chiselled in rose-red sandstone. This 'Citadel of Women' was built by a Brahmin priest, not by a monarch.

Those are the must-sees of Angkor, so now for some of the extras... Just before Angkor Thom, Baksei Chamkrong is a 10th Century brick construction, a fine example of an earlier, simpler style. The Elephant Terrace holds a series of fine reliefs of... elephants. Of the temples surrounding the eastern Baray, Prasat Kravan, like Baksei Chamkrong, is a 10th Century brick edifice best seen in the warm glow of the late afternoon sun.

For those with more time there are craft workshops around Siem Reap, supported by charitable organizations. Three side-trips are also sometimes suggested.

Two excursions continue beyond Banteay Srei to Kbal Spean, the River of a Thousand Lingas, and on to the sandstone plateau of Phnom Kulen. Kbal Spean is a two-hour drive from Siem Reap, and then you follow a trail into the forest to reach the Hindu fertility symbols carved into the bed of a trickling stream. Sculptures also adorn the riverbanks, but thieves have gouged out some of these for the antiquities market.

Phnom Kulen is where Jayavarman II in AD 802 crowned himself as the reincarnation of Vishnu and thereby founded the Angkorean dynasty. Unfortunately the site is controlled by an unsavory local politician whose goons extract a further twenty dollars from foreigners. Recent visitors found the hilltop temple littered and neglected. At 45 km (27 miles) from Siem Reap on rough roads, this is a full day's outing.

The third entails a hot, bumpy 15 kilometer (9 mile) journey east on Route 6 to the Roluos monuments, of which the Bakong is the most prominent. After Angkor I found the Bakong disappointing, but the villages at its foot were its saving grace. Saffron-robed monks came and went from a monastery, whilst hapless pigs made their way to market, trussed up on a motorcycle with their trotters in the air.

And how best to reach Angkor?

I suggest you make Phnom Penh, the capital, your Cambodian gateway. Travel from there to Siem Reap, jump-off point for Angkor, and then fly out (or vice versa). Otherwise your visit to Cambodia will have been rather one-dimensional.

Cambodia's fractured highways radiate from the capital like the spokes of a wheel. Routes 5 and 6 pass either side of the huge Tonle Sap Lake and whilst Route 6, the northernmost, is the direct route to Siem Reap and Angkor, Route 5 runs west towards Thailand via Battambang, Cambodia's sleepy second city.

Travel via Battambang to experience what Lonely Planet calls 'one of the most beautiful boat journeys in Cambodia'. The boat ride across Tonle Sap is a spellbinding progression through floating communities of fishing people, a vision of a flat, watery world.

Soon after sunrise, I scrambled down a steep riverbank, climbed inside a twin-engined speedboat and settled on a hard bench seat. Other foreigners arranged themselves on the wooden roof.

With a roar we took off upriver, racing past families bathing, cooking, playing in the murky waters of the Sangkei from makeshift landings at the waterline. There was little margin for error between our trajectory and the many fishing nets and markers.

Slowly, the landscape changed. Now the riverbank reached barely a foot above water, and beyond it, shallow silvery expanses stretched towards a hot, hazy horizon. We slowed to drop off goods at ramshackle piers, to weave past houseboats and fishing canoes or to squeeze between matted rushes. Several times, the vessel ground to a halt, its propellers tangled in floating weeds.

Imperceptibly we reached more or less open water, populated not only by passing watercraft but by permanent floating villages, complete with floating police stations, clinics and stores.

Four hours out from Battambang we moored at the foot of Phnom Krom, a solitary peak outside Siem Reap. Touts and tour guides crowded the narrow embankment with their vans; I had rejoined the throng.

Bangkok Airways flies direct to Siem Reap from Bangkok, Phuket and Sukhothai and to Phnom Penh from Bangkok. Cambodian visas are issued for $20 on arrival at the airport.

Speed boats leave Battambang each morning at 7:00 and foreigners are charged $15 for the four-hour ride.

US dollars circulate alongside the riel and you should carry cash (secured on your person) to cover all substantial expenses. Health risks include AIDS, hepatitis, malaria and the landmines still lurking off the beaten track.