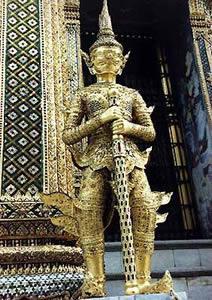 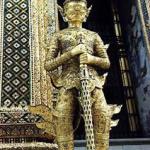 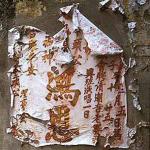 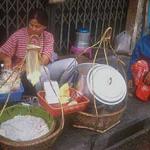 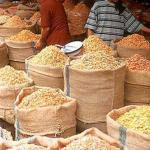 Yes, even Bangkok has a heart, feeding the city's congested arteries. It can be found between the eastern bank of the Chao Phraya and the railroad, encompassing the original royal palace, the older temples and Pahurat and Sampeng, the Indian and Chinese districts. Only on foot can Sampeng really be savoured, in spite of manholes and motorcyclists.

In the words of a popular guidebook, Sampeng is "... a confusing and crowded array of jewelry, hardware, wholesale food, automotive and fabric shops." If Yaowaraj and Ratchawong Roads are the spine of a piscine Chinatown then the fine herringbones are the sois and troks, the alleys and lanes. Beyond Chakrapet Road lies Pahurat, whose alleyways are crowded cheek by jowl with a Sikh temple and the fabric shops of Indian merchants.

At the turn of the century the opium dens and brothels of Sampeng had become quite notorious.

Westerners stepping down from the horse-drawn tramway to do business at the Hongkong and Shanghai Bank or the Danish East Asiatic Company complained long and loud about drunken hoodlums. Today the vices have been forced underground and the farang can wander in relative safety at all hours.

A walking tour should best begin in the cool of early morning from the ferry landing where Ratchawong Road begins. A few yards to the right is the narrow opening of a lane called Songwad, usually guarded by a miniature fire engine. Above our heads loom the three-storey shophouses with their ornate timber fretwork. Chinese wholesalers in singlets work from the pavement, oblivious to anything but business: counting coffee beans; supervising the bare-chested coolies who lug sacks of pulses, grains and spices off and on the gaudily-painted Chevrolet trucks.

Outside the Chinese school, there's room for a huddle of open-air stalls, where breakfast for some is smoked fish, pickle and spicy vegetables on a bed of rice. For others, it's congee, rice porridge with shallots, sliced ginger and a glass of weak tea.

By seven-thirty, even on a Sunday morning, the wholesalers are throwing up the shutters on Sampeng Lane. Plastic toys, gadgets and gew-gaws are their stock in trade. Hand trucks weave between the rickety tables and plastic chairs which crowd the already-tight alleys. Others set out styrene trays of cling-wrapped grapefruit wedges or symmetric slices of pineapple, cantaloupe and melon. Slabs of sickly-sweet, custard-yellow durian are hacked off the villainously spiky, hard carcasses.

Two of Bangkok's oldest commercial buildings, both over a century old, tower above the junction of Sampeng Lane (Soi Wanit 1) and Mangkon Road. Through a thicket of electrical cable one can still admire the dusty gold leaf and vermilion of the fearsome garudas, poised like figureheads above the portals. One block to the east, Trok Itsaranuphap passes the entrance to Talaat Kao, the Old Market where fresh fish and shellfish in innumerable varieties are displayed for sale, alive or freshly filleted.

Many grand banquet-style Chinese restaurants along this road specialise in Fujian or Guangdong cuisine.

By midnight the flow from Soi Mangkon, where it tries to debouch into Yaowaraj, is blocked by a sandbar of late-night food vendors: fresh-squeezed orange or guava juice, coconut or watermelon with crushed ice for a few baht, or just a fresh coconut, au naturel, with its top lopped off. The barrows are busy, dispensing deep-fried doughnuts, marinated satay sticks and noodle soup with pork or fish balls.

Piety is often manifest. Worshippers light their incense sticks and make their obeisance at the Dragon Lotus Temple, Wat Mangkon Kamalawat, on Charoen Krung Road. You might pass a funeral party which has set out offerings of garlands and polished fruit on linen-topped tables. One enterprise is devoted to the manufacture of huge red rice-paper lanterns, enlivened with gilded characters; other doorways are stacked with white-painted coffins.

The heat is rising steadily but it's still just cool enough to make the twenty minute trudge down to Wat Traimitr, Temple of the Golden Buddha. This has become such a popular attraction that one should reach it early in the day. Moneychangers in the temple? No such strictures exist in Theravada Buddhism, it seems, for here's one.

The story of this gleaming Buddha of solid gold, sculpted in the graceful Sukhothai style, bears repetition. Three metres tall and weighing 6.6 tons, it was rediscovered forty years ago when a protective stucco casing shattered as the image fell from a crane. The shroud had protected it from Burmese invaders.

Tourists gape through the open windows at an ordination: young men in white robes stand out amongst the rows of saffron, submitting to a senior who bestows the saffron sash. Then the candidates rise and move aside to receive and don the full robes from their new peers.

Oddly, this part of Sampeng is home to an historic church, the eighteenth century Holy Rosary in Talaat Noi near River City. There is another landing here at Tha Si Phraya but whether you can alight seems to be left to the whim of the ferry captain.

Hualampong Station anchors the south-eastern corner of Chinatown. Bangkok's main railway terminal was built just before World War I by Dutch architects and railway engineers commissioned by King Rama V, a fervent reformer. The geometric coloured-glass skylights have been described as "pure expressions of de Stijl Dutch Modernism". Other examples of Art Deco from the 1920s and 1930s can be found along the main roads hereabouts: one is the commanding General Post Office with its garuda sculptures.

Not The Orient Express