The Lady and the Tramplers 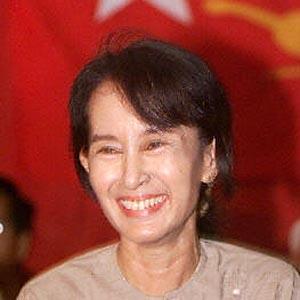 Burmese democracy leader Aung San Suu Kyi smiles at a question during a press conference in Yangon in 2002. 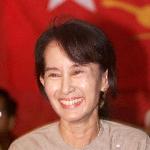 The title of this slim but fairly comprehensive volume derives from the fact that within Burma it has become customary to refer to pro-democracy leader Aung San Suu Kyi as "the Lady". As its author Barbara Victor points out, ordinary people do this to avoid being thrown into prison for sedition against the ruling military junta; the junta does it to avoid the volatile name Aung San, who was Suu Kyi's father and is to Burma what Ho Chi Minh is to Vietnam. Fittingly enough, the book's cover features a photo of Suu wearing yellow, the color that has come to be identified with the harried National League for Democracy, of which organization Suu is the nominal head.

So much has been written about Burma and Suu Kyi, and so little has changed for both of them, that one almost fails to see the point of writing anything more. I know several journalists affiliated with the pro-democracy movement (one of them has interviewed the Lady herself), and invariably when Burma comes up in conversation a storm cloud appears over the table at which we happen to be sitting. Burma is bad, they say; it's getting worse; and there's little hope that it will get better any time soon. Well, thanks Mr. Conviviality, that is exactly the kind of thing one needs to hear in order to unwind after a hard day's work: Give up. Victor is not much more optimistic, even though at the time she was in Burma the Lady had been released from house arrest. But she was released again in 2002, detained again in 2003. It is almost as if the regime simply gets bored with the status quo once in a while. In 2003 there was even speculation that Suu had been assassinated, but this was later disproved. God knows what would have happened had it been true: the end of the democracy movement, or maybe full-scale revolution.

As Victor travels about, she discovers that what the Burmese say and what they think are so opposed that comparisons with Orwell's 1984 are not out of order. Phones are tapped (what few phones there are); and at least back then -- the book was published in 1998 -- the Burmese were required to report their whereabouts in writing and on a daily basis. Billboards proclaim the regime's oddly synonymous goals (of which there are three, the same number of slogans in Orwell's Ingsoc.) Victor cites one claim that Burma combines the worst of several horrible regimes in the past, including the Third Reich, Stalin's Russia, Argentina under Pinochet. This strikes me as an exaggeration, if only because the global response to Burma has been comparatively weak. But the justification for indifference is the same. It's their problem; let them sort it out. Unfortunately "they" include 135 ethnic groups, who have borne the brunt of the regime's excesses. And Suu Kyi is seen by the regime as an outsider because she spent much of her youth in India and England; went to Oxford; married an Englishman. But by this logic, Gandhi and Nehru were also outsiders; even some of Burma's current leaders were educated in the United States, most notably Victor's minder Hla Min. The list of countries ruled by people educated in America goes on and on; right now it includes, to name but two, Thailand and the Philippines. "Neo-colonialism" can be as subtle as this.

While Victor is obviously biased toward the Lady and against the regime, she does not deify her, as so many others do. Especially the Burmese, who sometimes admire her as much for her beauty and charm as for her ideas. Recently in Chiang Mai, Thailand, a vigil was held for Suu Kyi, now in prison. I was told that it consisted mainly of chanting her name, as if her name alone is the answer to Burma's problems, or as if she herself is. "It is my destiny to rule Burma," Victor records her as saying. And perhaps it is. But winning the Nobel Peace Prize hardly qualifies one to rule a war-torn country; one can almost sympathize when a regime supporter says that without it, Burma would have become the Yugoslavia of Asia. Now that Indonesia has become a democracy, it is quite dramatically but somewhat predictably falling to pieces; interestingly, its current leader Megawati Sukarnoputri is daughter to the Indonesian equivalent of Aung San.

One of the most surprising accusations sometimes leveled against the Lady is that she is prone to haughtiness and bossiness; others accuse her of indifference toward her family. But here again a comparison with Gandhi may be appropriate. When you are trying almost single-handedly to rescue your country from tyranny, you can't always be punches and chuckles. But it may well be that Suu Kyi, who is often portrayed as a serene woman wearing flowers in her hair, may be forced by circumstances to rule like another Gandhi: Indira, a tyrant in her own right. Suu certainly has the mettle. According to Victor, she responded to demands by the regime that she leave the country with the words, "You will have to take me to the airport in chains."

"The Lady is the first full account of one woman's struggle" against the regime, says the book's back cover. Not exactly true, as the book is less concerned with the Lady than with the regime, of which there are more exhaustive accounts, many of them by Chiang Mai's own Bertil Lintner. But Victor does offer some good insights. She suggests that it is "erroneous" for people to call the NLD the "opposition", given that it won the elections of 1990. She reminds us that it was in part the army's aversion to socialism that led to the military coup of 1962; how ironic, then, that army leader Ne Win would then travel to China, kowtow to Mao, and come back talking about how wonderful socialism was. And despite her criticism of the regime, she is also critical of exiled Burmese dissidents, whom she describes as "often intellectually elitist, unrealistic, and certainly out of touch." But then this criticism applies to exiles virtually anywhere; and being out of touch is probably better than being in prison. Finally, Victor points out that as a result of the 1988 riots that left possibly thousands dead, 60% of Rangoon's industrial base was destroyed; given that the reason for the riots was Burma's collapsing economy, this particular response was hardly the wisest one.

Victor quotes a regime official saying that several Asian countries have made their greatest economic strides while under effective dictatorships. He is correct. But Burma is the exception that proves the rule. (Laos and Cambodia haven't done all that well either.) In Burma's case, one of the main problems has been the exorbitant proportion of its budget that goes to the military in order to keep the country together. One would not want to see a Bosnia in Burma, of course. But perhaps it needs to happen before Burma can become less like Orwell's bad dream. Peace means nothing when a gun is pointed at your head.