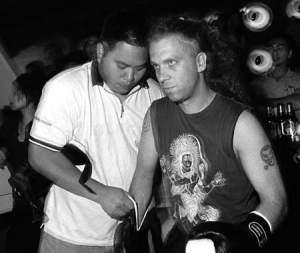 Special thanks to David Hartung for the photo. 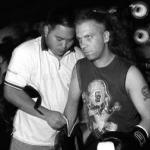 "In this corner, from New York, USA, weighing 60 kilograms...Joshua!"

It was a hot August night in Taipei, and I was about to be beaten up in public, perhaps severely. Standing across the ring, if you could call a cement square taped on a cement barroom floor a ring, stood a teenaged kid with a mean, hungry glint in his eyes. He was pounding his gloves together in anticipation, and his message was all too clear - "white boy, you're going down." My last shred of confidence evaporated.

Dear Jesus, where had this madness begun? Was my strange, self destructive approach to journalism somehow involved? Did I really need to ask myself that?

I had heard about the club from some friends in Taipei who told me about a local bar that hosted an amateur boxing night every Saturday. From what I'd heard, participants were generally overworked Taiwanese businessmen letting off steam in completely controlled environment, with regulation gloves and padded helmets. Why not write a story Hemingway-style, I thought, from the inside out. I'd made many a Taiwanese businessman burst into tears simply by refusing to let them pick up the dinner check. How hard could it be to beat one in a boxing ring?

Finding the place wasn't easy. I'd only had the vaguest idea of where to look, somewhere around the Technology Building Subway Station on Fushing Road. I set out around sundown with my friend Kyle Pearson, who had insisted on hitting me several times over the course of the day so I'd "be able to take a punch". It was only by sheer luck that we managed to spot the silver letters "VS" inlayed on the round handle of a silver door located in the far corner of the lobby of a non-descript Taiwanese office building. The place was locked up, but the doorman told us to come back after nine.

We got back around nine to find the chest-high VS sign up and the door leading into the basement open. It was still early, and the place was quiet. Kyle sat down and ordered a coke while I scoped the place out. A decent sized basement club, the VS was separated into two rooms. Over to the left of the coat check counter (which doubles as a weigh in station on fight night) was a large chill-out space complete with a low-slung chairs surrounding a dozen or so tables and some plush couches over by the walls. There was also a large-screen TV hanging from the ceiling. In the main room was a dance floor, a DJ station with two turntables, long counters along one of the walls, and a stone bar that must have cost a fortune. Behind the bar was Jo, a stunningly gorgeous bartender who was glad to talk up the positive aspects of the club's most popular event.

"It really isn't violent at all. Most of the people who compete are just regular people, businessmen mostly, though sometimes women fight, too." She said, "Amateur boxing helps them to let off some steam."

Vincent Dai, the club's manager, told me that the club had been holding Fight Night every Saturday for about six months.

"The event has become increasingly popular with westerners living in Taiwan." He said "They think it is like that movie Fight Club, with bare knuckles and no rules, but that isn't at all the case. All our fights are two minutes, opponents are paired by weight class, and we use regulation ten-ounce gloves and padded helmets."

There was some prize money involved, he told me, a few thousand Kuai for the most wins accumulated at the end of the month. But everything about the club was strictly amateur. "And most importantly, it stays friendly. No grudge matches."

Then he added that, in addition to the professional referee, the club also employed two bouncers "to make sure everything stays friendly."

At around eleven, people began to arrive, and by midnight, the place was packed. I scanned the faces of the patrons, seeing among them not one who looked like they'd ever even owned a tie. These were no businessmen; these were hardened street punks. My mindless bravado faded like a cheap die job.

If the sight of my potential opponents shook my poise, the next person I ran into shattered it. He was a stocky, well groomed American who bore with the look of a man who had broken many a brick in his life. But his appearance wasn't what scared me. I could tell by the way he was dressed that he hadn't come to brawl. It was what he said that threw me into a blind panic.

"The mouthpiece isn't there to protect the teeth, it's to protect you from biting your tongue in half when you get hit in the jaw...I've seen it happen?very hard to stop the flow of blood from the tongue."

Bill (full name withheld by request) was a lawyer and former kickboxing champion. He'd heard about the club, and wanted to see if the place was as colossally stupid as it sounded to a man with years of experience in competitive fighting.

"Even in a controlled situation, with experienced fighters, padded rings and professional referees, injuries are bound to happen." He said gravely "Here, a barroom situation with concrete floors, no mouthpieces, and untrained combatants?it's a disaster waiting to happen."

It was too late for me to back down, so Bill offered to bring me upstairs for a quick sidewalk sparring session, an offer I gladly accepted. He drilled on a few basic blocks and jabs, all the while giving me useful pre-brawl tips.

"Keep relaxed, keep a good posture, and keep your mouth shut so you don't bite your tongue off."

After a half an hour, I was confident of being able to survive this thing in one piece, and not much else. We headed back downstairs to find that the dance floor had been cleared and a makeshift boxing ring had been marked with white tape on the floor. The air was charged as the referee pushed through the crowd and began the big wind up. He laid out the rules in Mandarin and Taiwanese.

"No hitting below the belt. No elbows, knees or feet. No back of the head blows. Cross the white line once, a warning! Twice, disqualification!"

He said one more thing, and I could swear his tone was more than a bit sarcastic.

At this the crowd cheered wildly, and I felt the hairs on the back of my neck stand up as the first combatants were called into the ring.

The first contest was between two young, scrawny teenagers who looked like they were barely out of high school. They didn't "box" so much as flail wildly. I began to feel encouraged, figuring that I could have handled either of them. As I was contemplating this, the referee spoke up again.

"Uh-oh, our next match-up is between a foreigner and a Taiwanese - the best kind of fight!"

The crowd was screaming as I pressed my way into the taped off ring. As one of the bouncers fitted me into a sweaty pair of gloves and sparring helmet, I sized up my opponent. He was was taller than I was, and had a vicious look about him that made the previous two fighters look downright angelic. The bell rang. I gulped. He snarled, and ran straight at me, swinging.

Within seconds, I was on the defensive. I'd forgotten everything I'd been told, and reduced to just blocking my face. The strobe lights were blinding and I could barely see the punches coming at me. I felt one land on top of my head, and when I swung out to retaliate another hit me in the jaw, rattling my teeth. More rained down upon my head and the back of my neck, and I reflexively got into a clench to avoid further punishment. The referee pulled us apart.

I then remembered the last bit of advice Bill had given me; tap out if you're outclassed. My opponent was declared "winner by surrender", and given as a prize a large bath towel with the Tiger beer logo. I was given a washcloth with the same logo, and left to slink back into the crowd. It would be up to Kyle to regain some lost prestige for Taipei's foreign community, which he did, much to the chagrin of the assembled Taiwanese crowd.

While from ringside, his match looked like total chaos, Kyle told me that he'd developed a strategy while watching the other two fights.

"I went in with the idea that it would be a boxing match, but when I realized it would be more of a sumo match, I decided to just let my opponent tire himself out, scare him with a few hard punches, then push him out of the ring. It hurt like hell, but it was worth it."

All told, there were less than half a dozen matches that night, and there weren't any female competitors. After the last fight was over a very dangerous floorshow began in which the bartenders juggled bottles of flaming alcohol. This seemed to me a bad idea of entertainment in a crowded basement stocked with alcohol, drunks, and no fire exits.

Saying goodnight to Kyle, I walked out of the Vacuum Space and into the sweltering embrace of a Taipei summer night, leaving with teeth, tongue, and self esteem more-or-less intact. I'd done what I'd come to do, and if I didn't get the story I intended to get, it was only because the actual facts had intervened. There'd been no thrill of victory, and no real agony in my defeat - only a reminder of what I should have known all along, that I was too pretty to be a prize fighter.