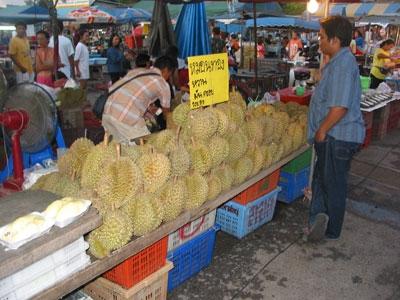 Durians at the Krabi night market in Thailand 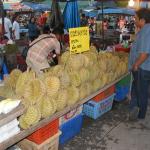 My first experience with the infamous durian was in Thailand on Koh Samui. Like much of S.E. Asia, I'd heard lots of opinions about them-but few facts. I only knew that they were green, covered in spikes, that they smelled bad and tourists often disliked them. Despite the many bad reviews, I was curious to try them, as well as every other fruit in the market. I managed to select one by blind luck because I didn't yet know the difference between durian and jackfruit, which is also green but covered in smaller protuberances.

I was fortunate that the vendor already cut the durian for me. I had neither a sturdy knife back at my room, nor any idea how to cut through the leathery, spiked husk. As I drove back to my bungalow on my little motorbike, I was surprised the fruit didn't seem to have any foul odor at all.

Back at my room, I pulled out one of the giant grub-like hunks of squishy yellowish flesh and took a bite. I grimaced. It was one of the worst things I'd ever tasted. The slimy glob had the texture of clumpy, spoiled milk and it tasted like rotten garlic and onions. I tossed the rest in the garbage and was annoyed I'd spent so much to buy it compared to the much cheaper, delicious fruits at the market.

I left the room and came back a few hours later and nearly vomited from the stench that greeted me at the door. I was angry because I saw no outside garbage bins and had no other way of disposing it. I had to wait until after dark, then sneak down to the beach and throw the rotting corpse-fruit into the sea.

As I pushed across S.E. Asia and on to Vietnam, further encounters with durian were inescapable. Ahead of taro and various colors of beans, durian is one of the most popular ice cream flavors around. Half the local candies are made with it, mixed with coconut, banana, sesame seeds or nuts. It's in the moon cakes, fillings of the bakery items, and nearly everything else sweet. Through gradual exposure I found that these incarnations were not as objectionable. Sometimes I didn't even notice its presence.

There's a whole durian subculture in Vietnam, where it's known as "sau rieng." Wealthy housewives with durian addictions will budget +1,000,000VND (more than a month's salary for the average person) for the durian season. That's not to say everyone likes it-half my friends do not, and as commonly reported, it usually is banned from hotel rooms and busses. For those that do love it however, it is one of God's finest delicacies. In Vietnam they say the very best Durians come from Thailand, although they are originally native to Indonesia and Malaysia.

A year after trying my first raw Durian, I sat watching my friends relishing a fresh one.  After they got up, I sat alone staring at a few left-over segments. Remembering the ice cream and candies I'd sampled the previous year, I lifted one to my lips and tried a bite once more. The first bite was like almond custard. The next was like a sweet cheese filling spread across a danish. Then a white chocolate moose... It was one of the most complex fruits I'd ever tasted and I was suddenly, unexpectedly, addicted for life.

Certainly I learned to appreciate durian through gradual exposure. I like ice cream and bakery items, and it's present in plenty of those (in fact durian has a tendency to lend its flavor to every other item kept in the same freezer). However, I believe most of my dislike came from my preconceived notion of what is "fruitiness," as well as the shallow assessments I'd received from others. It was all about expectation.

When I think of fruit, like most, I think of strawberries, pineapples, oranges-things that are sweet and tart.  What about avocados, bananas, coconuts or even beans? Much like a durian, they don't fit that category-yet I like (or have learned to like) all of them. I'd been told durian was a stinky, foul-tasting fruit and so that's what I experienced when I first tried it. If someone had prepared me instead, by explaining it was like cheesecake or a cream pie (or even left me with no preface at all), I'm sure I would have fallen in love at first bite.

I learned a lot from my affair with durians. Much of my initial experience in S.E. Asia was tempered by my own expectations. I constantly compared and rated each country and each experience against the others. I made advanced judgments based on the opinions of others rather than forming objective conclusions based on my own experience. Only when I learned about the unique cultures of each nation and recognize their own richness and even positive commonalities, did I begin to appreciate their true splendor upon successive explorations. I found that foods, traditions, and even locations were all much more rewarding upon a second, more enlightened visit-especially if I did not enjoy them the first time.

Many people will be surprised to learn they can easily try durian in their own countries. Most Asian food stores catering to S.E. Asian customers will have durian in their freezer sections. It may be sold whole, out-of-the-shell, in blocks of processed fruit, as well as in the form of candies and ice cream. Unlike many fruits, freezing does not damage or alter durian in any way (although it may kill the seeds). Prices vary depending upon country, and season. In Vietnam, expect to pay about $2US for a whole fruit in season. In the USA, expect to pay about $5.

If you buy a whole fruit, you'll need a strong knife to cut it. The husk is a bit like cutting through a spiked egg carton.  The fruit is arranged vertically around the core in segments. There's no need to split the entire husk into separate pieces to acquire the edible parts.  Simply slice vertically, starting near the stem, moving down to the bottom, at each of the bulges, and then pull out the edible interior.

The flesh of a fresh durian will not normally have a strong smell when first opened.  The husk of the fruit carries most of the odor, but the flesh of the fruit will begin to smell strongly once it has been exposed to the air for some time. In full force, the odor is highly objectionable to some, but appetizing to others. I now enjoy the pungent fragrance very much, while in contrast, the scent of the more popular jackfruit seems quite foul to me.

There are at least 30 species of durian, nine of which are widely considered edible. For more information, be sure to see http://en.wikipedia.org/wiki/Durian.