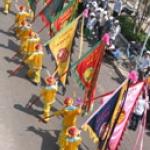 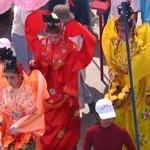 In Vietnam there is a little known festival called “Cau Ngu” which is part of an ancient whale-worshipping cult practiced by local fisherman. While it is observed in many coastal communities, the most well known example of this religious practice is found in the fishing community of Phan Thiet.
In the Cau Ngu ("Fish Prayer") Festival, participants pray to the "big fish" (whales, dolphins, sharks, etc.), asking their spirits not to hinder them in fishing trips during the coming year. Living whales are highly revered in the local culture. Fishermen never hunt the large marine animals. Up to a century ago, whales were frequently spotted in the surrounding coast of Phan Thiet and fishermen believed they were gods of the sea who guided and protected them. They are seen infrequently now, but the practice still remains.
The festival includes the "Nghinh Ong" ("Man Welcome," or in this case "Fish Welcome"). When a whale or a giant dolphin dies and is washed ashore, people give them an elaborate funeral to welcome the spirit of the fish. In the past, women cried and went into elaborate mourning to show their respect and veneration for the animals. Today the procession moves with performers in elaborate traditional costumes walking on stilts, musicians drumming in trans-like rhythms, and dragon dancers running through the crowded streets.
After the procession, the remains of the creatures are then stored in the Van Thuy Tu Temple. After three to five years, the bones are exhumed, shrouded and carried around the town until finally returned to the temple to be worshipped again. Whale funerals always attract large crowds from the surrounding community. The last whale burial was in 2002.
When participants ‘Cau Ngu’, they also ‘Nghinh Ong’ at the same time, with or without any corpse for the procession (without it they still have a big parade every year). The combined festival demonstrates the duality of both adoration as well as fear, present in many local festivals and religious practices. The participants welcome the spirit of the creature in jubilation, yet at the same time fisherman are in bondage to fear--that the fish spirit may cause them harm or even death on the sea if it is not properly honored.
In the past fishermen liberally tattooed their bodies to scare away whales and sharks if they fell into the water. They also painted their boats with eyes, fins, scales and tails for the same effect. The Phan Thiet fishing fleet is famous for it’s bright colorful patterns, which evolved from the old decorative elements.
The whale-worship cult is thought to originate in early Khmer and Cham cultures, and may predate every other established religion in Vietnam. The Van Thuy Tu Temple on Ngu Ong Street (Fisherman Street, Duc Thang ward, Phan Thiet) is the oldest temple dedicated to whale worship in Vietnam. Built in 1762, the temple now contains over 100 whale skeletons and other strange species of fish, most of which are 100-150 years old. Most noteworthy is a 22 meter whale skeleton, which is estimated to have weighed 65 tons when alive. The temple was recognized as a national relic site in 1996, although it has not been marketed yet to foreign tourists.
Sometimes the provincial government in Phan Thiet officially combines the festival with the Chinese "Quan Kong" celebration. This holiday remembers the birthday of a Chinese general and warrior-saint, who is honored by the local ethnic Chinese community. The festival occurs at about the same time, and is an opportunity for the local government to promote an even larger tourism event. On this day people gather to pray for happiness, health and good fortune for family and friends.
Ong Pagoda in Phan Thiet was built to worship Quan Kong in November 1770 (Year of the Tiger), in Duc Nghia Precinct. It has beautiful, traditional, Chinese architecture, and a statue of Quan Kong as well as an old bell cast in Guang Tung (China. On festival days the pagoda is decorated with flower garlands, and colorful lanterns are hung during the night. Cultural activities during the festival include "hat boi" (classical dramas performances) and "hat ba trao" (singing traditional local folk songs). The festival continues with an enormous parade of costumed performers, dragons, and lion dancers. The highlight is always a performance by a troupe of 150 people forming a kylin--a mythical beast looking like a cross between a lion and a dragon--and claimed to be the longest in South East Asia.
.....................
The Cau Ngu and Quan Kong festivals typically happen in August (in 2007, the festival was held August 2-4), although the exact date varies from year to year as they occur according to the lunar calendar.