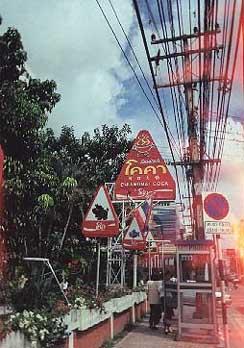 This sign for a Chiang Mai restaurant shows the word 'coca' transliterated into Thai. The four characters are, from left to right, o-k-k-ah; but, because of Thai's placement of vowels, it is read 'kokah.' Transliterations are common for loan words; 'download', for example, is 'daonlot', with a mark over the 'n' to make it silent. 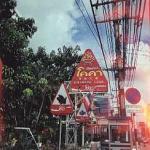 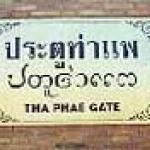 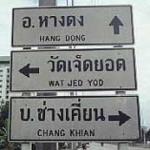 Westerners in Thailand take up the study of the country's language to a degree unprecedented in my experience abroad. Chiang Mai, arguably the traveler's favorite town, overflows with Thai language centers, both makeshift and established. Travelers can make a few bucks teaching English, but the Thais seem bent on making just as much teaching Thai. The result is an almost unheard-of degree of truly reciprocal cultural exchange.

This is due in part to Thailand's never having been colonized, and therefore never having been compelled to incorporate any European languages into its institutions. In many Asian countries, one can get by speaking English, and many signs - and in Malaysia, the whole of the language - have been transliterated. Walk into a Thai bookstore and try to find an English book that is not Tom Jones or The Confessions of an Opium Eater, and you'll have some idea of how uninformed are the laments that the world will soon be monolingual.

The Thais are also very proud of their language, as proud as they are of their food and King. And just as Thais all but refuse to eat anything but Thai food, and brook not the slightest jest or criticism of the monarchy, so too are they disinclined to speak anything but Thai. A Thai with no English and a European with no Thai, will, in most cases, end up speaking Thai to each other. This is not only obstinacy. Thais are gentle, bashful, quiet people, who will keep mum if faced with the possibility of the embarassment demanded by the acquisition of a new language.

But the primary reason Westerns eagerly learn Thai is that it is a fascinating language and it is fun, and fairly easy, to acquire. In colloquial Thai, grammar is almost nonexistent. There are no conjugations or declensions, no genders or articles, and the handful of tenses are usually reduced to present tense. Almost every word is monosyllabic; and the script is almost perfectly phonetic.

The difficulties for the Westerner learning Thai, however, are manifold. First, Thai is a tonal language. That is, the meaning of a word is determined by its tone. As there are five tones in all - high, middle, low, rising, and falling - the chance of embarrassing solecisms, at which the Thais customarily roar with discouraging laughter, is frustratingly high. The word roo-a, for example, can mean 'vibrate', 'leak', and 'fence,' depending on the tone used. Whence 'the bottle is vibrating!' and 'the bottle sprung a fence!' A common enough, exasperating experience among novices of Thai is to say, for example, the word 'soy' at least five different ways until the perplexed but patient Thai finally leans back and laughs, "Oh! Soy!" - pronouncing the word with no detectable difference from the novice's previous attempts.

Another difficulty is Thai vocabulary, which has few cognates with words of Indo-European languages. It is easy enough to remember that die Schule is German for school. The Thai word is rorng rien. A few mnemonic coincidences soothe the learner's heart - bahn is the word for house - but there are as many causes for memory's confoundment - moo, for example, the word for - cow? Sorry, moo means pig.

Thai's connection to the Indo-European languages is through the many loan words from Sanskrit, but these are usually considered 'high' or 'proper' words, for which there is usually a colloquial equivalent. The learner spurred on by this will make many the same mistake as one delving into Latin or Greek to improve his English. No one ever says 'cachinnate' instead of 'laugh'; and if they do, they'll either be misunderstood, or understood to be a snob.

Also daunting is the Thai script. As the price of its phoneticism, it contains 44 consonants and 32 vowels or vowel clusters. The vowels appear in every compass direction from the consonants they follow in speech. For most Westerners, learning almost triple the letters found in the Roman alphabet is unconscionable. Most don't bother, especially as many of the letters are redundant. There are five letters, for example, which sound more or less like 'k'. As if this were not enough, Thai writing contains no spaces between words. IMAGINETRYINGTOLEARNENGLISHIFITWEREWRITTENLIKETHIS.

Westerners also have difficulty speaking Thai because they feel foolish speaking such a playful, melodious language. English in comparison is grave and monotonous - a language ideally suited to science, not so much to play. Thai is composed of economical sentences and a limited vocabulary - a language at times maddeningly incapable of conveying helpful directions, but ideally suited to mirthful chatter.

Thais also, stymied by how to explain a certain action, will often substitute the sound it makes, along with some suggestive hand gesture. To the unversed, a typical Thai conversation may consist of streams of unknown words interrupted by glak glak glak! and dring dring! and bok bok! The accompanying hand gestures fill in the gaps of meaning. As an extreme example, I once taught a Thai girl who had an extensive catalogue of sounds and gestures for mathematical curves. An exponential curve, for example, sounds like a slide whistle and looks like a plane taking off.

One of the first things a traveler learns to say in Thai is nit noy, or 'a little bit.' This because a traveler will usually hear, as he lambastes a baffled Thai with his native tongue, the modest, hopeful query, "Do you speak Thai?" The traveler quickly learns that even among the most educated the question is a common one, and that he will be better off learning Thai than trying to win the Thais over to English. For though it is quickly becoming the world's lingua franca, English won't be Thailand's language for a long time to come.