Macau: After the Handover 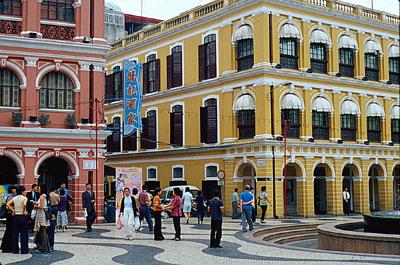 Square in the old quarter of Macau. 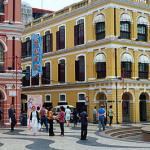 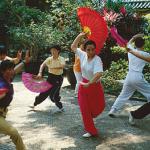 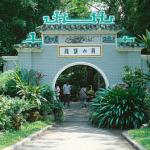 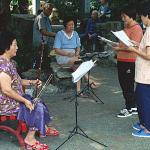 Peering out the window of my hydrofoil from Hong Kong, I watched the familiar outline of the Macau ferry terminal draw closer. The Portuguese had recently returned control of Macau to the Chinese, and I wondered how much the city had changed since the handover. Had the city lost its laid-back charm - a charm that had resulted from a unique blend of East and West - when the Chinese government assumed control and oriented the city firmly to the East? And did the sensational media reports of gangland violence really mean that Macau had become an unsafe city to visit?

As my hydrofoil nudged the pier, I prepared to find out.

But First a Bit of History

When President Jorge Sampaio officially returned Macau to China after 442 years of Portuguese rule, he closed the book on European colonialism in Asia. On December 19, 1999, the Portuguese standard slid down the flagpole to the strains of "A Portuguesa," and then soldiers from the People's Liberation Army raised the Chinese flag to the sound of China's national anthem.

At the stroke of midnight Macau became a self-governing territory called the Macau Special Administrative Region - a rather grand-sounding name for a city of only 450,000 souls crammed into the nine square miles of the Macau peninsula and the adjacent islands of Taipa and Coloane.

The Chinese government pledged to let Macau run its own affairs for fifty years, but it had already wavered on keeping a similar promise to neighboring Hong Kong. Macau's political future remained clouded, though most residents - more than 95% of whom are Chinese - hoped that China would bring a newfound prosperity to the city after four and a half centuries of somewhat indifferent Portuguese rule.

Change Lies in the Details

I walked down the hydrofoil's gangway and into the bustling ferry terminal, where I quickly passed through customs and immigration. The entry regulations hadn't changed; American and Canadian visitors with valid passports still automatically received no-fee twenty-day visas upon arrival. More surprisingly, my visa stamp bore the phrase "Macau Porto Exterior," which meant the colonial language had not been completely eliminated from government use.

Of course, Cantonese has always been the primary language of Macau, not Portuguese. A declining number of locals now speak the colonial tongue; an even smaller number speak Macanese, a unique language that blends elements of Cantonese and Portuguese. English, in fact, has now become the city's preferred second language.

At the bank counter in the terminal I changed US dollars for pataca, the local currency introduced by the former Portuguese administration. The pataca had not been replaced by the Chinese yuan after the handover, and had not suffered any depreciation during the change of governments. At roughly eight pataca to the US dollar, the exchange rate remained the same as under colonial rule.

Like the currency, the ferry terminal itself appeared to be just the same. I noticed nothing different about the crowd of passengers either. Hydrofoils arrived and departed with the normal mix of gamblers from Hong Kong, tourists from Europe and North America, and mainland Chinese from Guangzhou.

In fact, as I explored the city I couldn't find any changes at all beyond some minor details. The red Chinese flag hung from government buildings rather than the Portuguese standard. New traffic signs now put Chinese characters at the top and relegated Portuguese to the second row. A parking lot at the base of Guia Hill contained the spit-and-polish military vehicles of the small People's Liberation Army (PLA) garrison. And that was about it for visible handover changes.

As I wandered about Macau I discovered that the truly notable changes had not resulted from the handover but from a frenzy of land reclamation and large-scale construction projects.

A new bridge now connected Taipa and Coloane to the Chinese island of Hengchin. This bridge symbolized the city's return to China, but like the handover itself, it also remained somewhat redundant. After all, China had maintained de-facto control over Macau for decades, and the city had always enjoyed direct access to the mainland via the downtown Portas de Cerco border crossing.

Like Atlantis rising from the sea, a new district of Macau had sprang from the shallow waters off the scenic Praia Grande boulevard since my last visit, complete with skyscrapers and parking garages. The Praia Grande, which once fronted the Pearl River estuary, now fronts a lake. Beyond that lake lie brand-new office blocks, traffic circles, a highway, and an observation tower. Only beyond this new outgrowth of the city did I finally find the Pearl River. I sometimes think that given the speed at which Hong Kong - forty miles to the north-east - and Macau reclaim waterfront land, they will eventually fill in the entire Pearl River estuary and become one giant megalopolis.

But that would be a pity, for while Hong Kong remains a dynamic center of business and finance, Macau has always been less well-off but more relaxed. Unlike the money-crazed denizens of Hong Kong, the people of Macau value the good things in life, from food and drink to gardens and greenery. The newly constructed district opposite the Praia Grande, for example, contains an abundance of pleasant green parks - Hong Kong would have built on the land instead - while the ground floors of the office towers hosted European-style sidewalk cafes. Inlaid tiles decorated the walkways in the parks, as did new statues and sculptures. Unlike their cousins across the estuary, the locals moved at a slow enough pace to actually enjoy these oases of green.

In no hurry myself, I strolled over to the Largo do Senado, a square lovingly restored with paving tiles imported from Portugal. The white municipal council (known before the handover as the Leal Senado, or Loyal Senate) and other arcaded buildings hemmed the square. I felt like I could have been somewhere back on the Iberian Peninsula, and quickly concluded that Macau won't be shaking off 442 years of Portuguese influence - some would call it cultural imperialism - anytime soon.

Like the people of Brazil, Angola, Mozambique and other Portuguese colonies, the residents of Macau were generally glad to see the Portuguese go. But even while repudiating their colonial rulers, they clearly intended to hold on to much that had resulted from those many centuries of Portuguese rule, from wine to EU passports.

Before the handover a series of bloody gangland shootings had given Macau some bad press. In broad daylight, hitmen had gunned down rival gang members on city streets. Predictably, tourism had suffered as a result.

Since tourists - and their gambling - underpinned the city's economy, the Portuguese had felt obliged to act. In the last days of their colonial administration they had cracked down hard on the Triad gangs competing for the cash generated by Macau's massive gambling industry. 14K Triad kingpin Wan Kuok-koi (a.k.a. Broken Tooth) was arrested, sentenced by a special judge flown in from Lisbon, and sent to prison along with a number of his henchmen. Unimpressed by this last-minute effort, many residents had welcomed the handover in the belief that the Chinese authorities and the PLA would put the Triad gangs out of business altogether.

The streets generally have been safer since the handover, though there have been some unruly political demonstrations as well as protests by members of the mysterious Falun Gong. However, everyone knows that as long as gambling continues to generate several billion each year - not to mention over fifty percent of the city's revenue - then organized crime will continue to be as much a feature of the city as cobbled streets and colonial architecture.

In its travel advisory for Macau the US State Department notes that tourists generally and Americans specifically have not been Triad gang targets. However, the advisory also cautions that innocent bystanders could potentially get caught up in the enclave's inter-gang warfare. Consequently, the State Department suggests that Americans "exercise prudence and caution" while visiting Macau and remain alert to the possibility of violence.

Despite the State Department's grim advisory I felt completely at ease in Macau, whether hiking secluded trails up to the Guia Hill lighthouse or walking narrow city streets after nightfall. From the casual visitor's perspective, Macau remains a peaceful, orderly, and friendly place to visit. Street crime is rare, and I suspect Macau to be safer than an American city of comparable size. As long as you don't try to horn in on Triad business, your visit to Macau should be as safe as it is pleasant.

One significant handover change occurred when the luxurious Bela Vista morphed into the Portuguese Consul. This struck me as a pity, for the Bela Vista ranked up there with such classic colonial hotels as Raffles of Singapore and the Oriental of Bangkok.

Since I had no business with the Portuguese ambassador, I skipped the Bela Vista and caught a cab to the city's only remaining colonial hotel - the Pousada de Sao Tiago. The pousada ("inn") has always been one of my favorite hotels, both because it rests atop the ramparts of a seventeenth-century fortress and because it offers the best front door of any hotel in the world.

The entrance to the pousada consists of a stone staircase that tunnels up through the old battlements, and a fountain at the top of the stairs sends water flowing down tiled runnels on each side of the steps. Entering the pousada feels like walking under a waterfall without actually getting wet, and this natural air conditioning always offers a welcome relief from the humid estuary heat.

I took a seat on the terrace of the pousada's Os Gatos restaurant, which stands atop the fortress walls. Shaded by trees and enjoying a pleasant sea breeze, I ordered a carafe of vinho verde white wine and pasteis de bacalhau (codfish rolls), those two Portuguese staples that Macau has made its own.

The only change since my last visit lay in the view, which in addition to the inner harbor and the hills of China's Guangdong province, now included the new highway running around the manmade lake as well. As might be expected in such a relaxed city, traffic remained sparse on the highway, and the tugs on the river steamed along at a barely discernable pace.

Macau's language, culture, location, and history all made a return to China inevitable. Barring a few brave pro-democracy activists, nobody questioned that such a return remained both right and just. The question had always been whether this return would sweep away those things that made Macau so unique - its laid-back atmosphere and fine cuisine, colonial buildings and cobbled streets, and unique mingling of Cantonese and Portuguese elements.

As I drank my chilled vinho verde and looked out across the estuary to China, I knew that I'd answered that question. Macau still remained an enchanting fusion of East and West. Like good Portuguese wine, it could only get better with age.